From Cape Town to Motortown

Flying in to Metro Airport aboard Donald Trump’s Boeing 727, a newly freed Nelson Mandela touched down in Detroit 30 years ago today to celebrate his release from a South African prison with a rally at Tiger Stadium D. Weiss/Walter Reuther Library
Amid impassioned cries of “Amandla!” and “Viva Mandela!” Nelson and Winnie Mandela wave to a crowd of more than 49,000 people at Tiger Stadium June 28, 1990.

It is just past 10 o’clock on a Thursday night. The afternoon drizzle has fizzled, but a vicious hailstorm is closing in on Corktown.

Like the clouds in the Clara Ward song, the approaching storm is ominous — so dark and sable. But Reverend Jesse Jackson is praying the rain away.

Surely he is able.

Here in the city’s oldest neighborhood, not even the threat of hail can dampen the spirits of the 49,000 people joyously crammed inside Tiger Stadium as they await the guest of honor. Exhausted from his arduous journey, he is hours behind schedule.

But time matters not tonight. The Motor City's yearning.

They are here to see Madiba.

The crowd, the largest Black crowd ever to assemble at Tiger Stadium, is ready. Many have been here since the gates opened at 4 o’clock. Down the street on Lafayette Avenue, Chuck Gaidica is closely monitoring the approaching storm on Channel 4’s Doppler radar. Somewhere out near Hillsdale, the clouds begin to dissipate.

Surrounded by a stone-faced security detail more than a dozen strong, a long, black Cadillac rolls onto the warning track. A man in a blue suit and bow tie grabs the microphone and implores his audience.

As the limo inches its way toward the stage, the crowd is nearing fever pitch. The 2,000-person choir, in its white shirts and ANC sashes, rises to its feet. Jubilant Black men in kufis and dashikis wail away on their djembes.

Inside the limousine is the city’s first African American mayor, the former Tuskegee Airman Coleman A. Young. Seated next to him is the beleaguered but ebullient UAW president Owen Bieber. And in the back of the limousine, in the midst of a grueling North American freedom tour onboard one of Donald Trump's short-lived shuttles, sit an exhausted, but exhilarated Nelson and Winnie Mandela.

The outfield once patrolled by the likes of Ty Cobb and Al Kaline is filled with Black dignitaries. Damon Keith, Harry Belafonte, Mangedwa Nyathi.

This is no mere baseball park. It is the place where Marvin Gaye first saw Lem Barney take to the gridiron, where Willie Horton cut down Lou Brock at home plate, where Joe Louis defended his heavyweight title.

The limousine comes to a stop, and its doors begin to open. Out into the night steps the 71-year-old deputy president of the African National Congress. His aging eyes, damaged from years of hard labor in the limestone quarry of Robben Island, squint under the glare of the lights. He is beaming.

The man in the blue suit, Reverend Wendell Anthony, roars into his microphone once again. He is electric.

“Amandla!” he cries, his impassioned voice echoing in the night.

“Ngwethu!” the crowd roars in response.


Power to the people.

After 27 years in a South African prison, Nelson Mandela has come home. He is among comrades here. That this rally for Mandela is taking place at Tiger Stadium is not lost on this crowd. Once known as Briggs Stadium after former Tigers owner Walter Briggs, it is a place whose infamous motto in the 1950s was “No jigs with Briggs.” 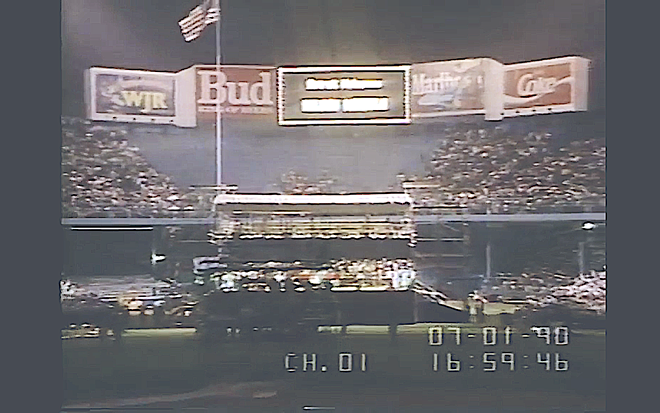 And it is the place where Briggs’ most celebrated offseason employee at his eastside Detroit manufacturing plant was not allowed to play because of the color of his skin.

Engulfed in a sea of stoic State Department security agents, the Mandelas wend their way through the throng. Tiger Stadium is woke.

The ballpark’s oversized scoreboard, with its blaring billboards for Budweiser, Marlboro, and Coca-Cola, towers over the stage. Out on the ancient centerfield flagpole, an American flag flaps gently in the wind. The stadium’s hulking light towers illuminate the echoing green.

Mopping his brow with a handkerchief à la Louis Armstrong, Nelson Mandela steps to the podium. He has arrived at his destination: “Motortown.”

“Brother, brother,” he says, channeling Marvin Gaye, “there’s far too many of you dying.” The crowd instantly recognizes the lyrics.

“Mother, mother," he says, "there’s far too many of you crying.”

“In the face of your own problems and difficulties," he says, "you have not forgotten us. … Your solidarity has given us enormous strength and courage.

“For how long must our brothers and sisters go on dying?” he asks. “We declare, not for long!”

The hour is getting late, and Madiba has grown weary. He must be on his way. But before he leaves, the Queen of Soul shall send him off with a soul serenade.