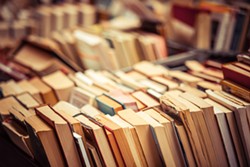 According to the Free Press, district officials said the program had to end because of a teacher shortage. The timing is unfortunate: a law that goes into effect next year will begin to require third-graders to be held back if they fall behind in reading.

"It’s absolutely absurd and inexplicable in light of the third-grade reading legislation, and in light of our district's supposed commitment to literacy, that we would eliminate such a successful program," Reading Recovery teacher Cari Chagnon told the Free Press.

The change affects 200 lowest-performing first-graders this year, who would get one-on-one daily half-hour lessons with specially trained teachers. According to Reading Recovery Center of Michigan at Oakland University director Mary Lose, "it's very unlikely that they’ll catch up on their own just with classroom instruction."

In September, seven Detroit schoolchildren filed suit against Gov. Rick Snyder and Michigan education officials, claiming their management of Detroit's school system effectively denied them the right to literacy. But Snyder's lawyers argue many factors that contribute to illiteracy rest outside of the school district: "poverty, parental involvement (or lack thereof), medical problems, intellectual limitations, domestic violence, trauma, and other numerous influences," according to a motion filed by Snyder's attorneys to dismiss the suit.

However, abruptly cutting a much-needed literacy program is certainly not bringing these at-risk students any additional stability.