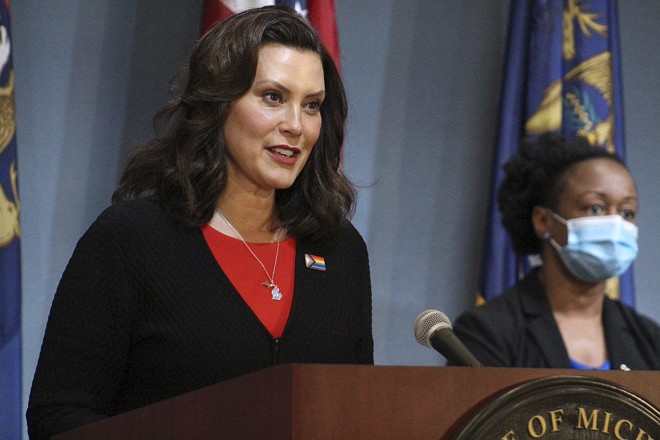 State of Michigan
Gov. Gretchen Whitmer at a recent news conference about the coronavirus.

A petition to recall Gov. Gretchen Whitmer is expected to begin circulating on July 1 after the bipartisan Board of Canvassers approved the language on Monday.

The petition organizer, Albion resident Chad Baase, 39, must collect more than 1 million signatures from registered voters within 60 days of launching it to get the recall question on the statewide ballot.

The recall is based on Whitmer’s response to the coronavirus pandemic, which resulted in nearly 6,000 deaths and 65,000 confirmed infections in Michigan.

Baase told reporters that the primary motivation behind the petition was the executive orders’ impact on businesses and employees, many of whom were laid off and struggled to get relief because the state’s unemployment system was ill-equipped to handle the unprecedented demand.

“You can’t take away someone’s income and say you’re eligible for pandemic unemployment but then you can’t speak with anyone. I’m still waiting on my unemployment” Baase told MLive. They owe me 10 weeks.”

Whitmer’s campaign team dismissed the recall as “another baseless partisan attack” and said the Board of Canvassers' decision likely will be appealed because the board failed “to apply the correct standard of review to the petition,” said Christopher Mills, a senior adviser to governor’s campaign.

"Michiganders know that the vast majority support the governor’s swift and aggressive action in the fight against COVID-19," Mills said. "The governor plans to fight this recall aggressively while staying focused on protecting Michigan families from the spread of COVID-19."

Polls have shown that most Michigan residents generally support Whitmer’s handling of the pandemic.