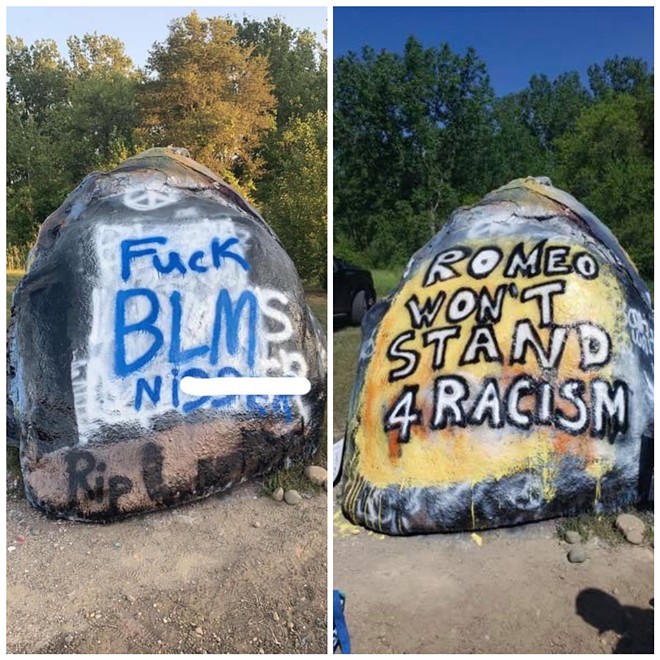 Romeo resident Christy Seitz says her family's Romeo roots go back more than 100 years. A recruiter married to a farmer, she claims to be a boring person who is in bed by 8:30 p.m.

But since Saturday, Seitz has found herself buried in direct messages and Facebook notifications after launching the Romeo/Washington/Neighbors Diversity and Inclusion Club, a Facebook group where Macomb County residents could post helpful information about Black Lives Matter marches and calls to action, along with other town-specific news, without the hateful rhetoric found in other groups.

By Monday, the group had accumulated 750 members and growing. The page wasn't intended to be political, but Seitz recognizes the need for a page like hers was born from the exclusion of marginalized groups in the private Washington Township, Michigan Facebook page, which she says since 2020, has become like “Trump City,” filled with misogynistic memes about Gov. Gretchen Whitmer and House Speaker Nancy Pelosi.

"Romeo is, you know, kind of a Trump place," she says. "It seems like there's a lot of red voters here and we know that. It's the home of Kid Rock, who's very clearly conservative. So, you know, the demographic, especially of the older residents, tend to be a little more conservative."

However, things escalated on Sunday night or early Monday morning when someone defaced “The Romeo Rock” — a rock that has grown to a seven-foot boulder thanks to years of layers of paint — with “Fuck BLM N****r.”

The message it had covered was one in support of the Black Lives Matter Movement. Seitz says the rock still had the positive message on it when she went to bed.

The rock, which has its own Facebook page, is used by individuals to paint encouraging messages for birthdays, graduation, and engagement announcements.

"It's kind of a running joke," Seitz says. "Like what a small town you live in if you get engaged on the Romeo rock."

Seitz says there's general respect for what goes on the rock, reflecting on a time when it became a memorial for a teen who had died, which stayed painted in his memory for a few months before being painted over.

But in less than 48 hours, Seitz estimates the rock has been painted eight times.

One commenter in the Washington Township group, who is the wife of a local business owner, was among the posters upset by the Black Lives Matter message, writing, “Go paint that in your own hood!! This is TRUMP country!!! Go home.”

(Since the rock was defaced, page administrator Sebastiano “Sam” Previti, a Washington Township trustee who is running for supervisor in the upcoming election, has issued a zero-tolerance policy to the group when it comes to hate speech.) People are now signing up to watch over the rock. Seitz asks that people sign up in pairs, as she doesn't want anyone to put themselves in harm's way.

“I don't want anyone out there alone, and I don't want anyone who's a minority or at risk for any sort of white hate to be stuck in that position,” she says. “It's crazy. I'm saying those words about Romeo, but, like, I have to recognize that that's where we're at, you know?"

The rock was repainted Monday morning with: “Romeo Won't Stand 4 Racism,” and has several volunteers watching to make sure it isn't defaced with hate speech. But the rock isn't the only evidence of the racial divide in Romeo. A flyer began circulating last week that featured information for a Black Lives Rally march for this coming weekend. Those activists, organizers, and hundreds of members of the Inclusion Facebook group could not identify who had organized the event, which became a growing concern.

“There's so much more that goes into organizing a protest and just marching down the street,” Amanda Taylor says.

Taylor is a Warren resident who was born in Sweden and grew up in Romeo, and is among those organizers behind the Romeo March for Racial Justice, which will take place at 2:30 p.m. on Friday, June 12.

“I'm half-Black,” Taylor says. “I was raised in an all-white community, but my grandfather's grandmother was a slave. I'm not that far down,” she says. “This is something that needs to be said. This is an open conversation, and sometimes a conversation is about answering questions.”

When organizers discovered who had distributed the mysterious flyer on Monday, it was not the hate-filled counter-protest trap they had originally suspected it to be. The flyer was created by some young students who had come together to try to organize a march against racial injustice through Romeo on their own. Taylor, relieved to learn that the event was made with good intentions, says she has sort of absorbed the students into her group.

“We wouldn’t be here without their initiative, regardless of what we thought their intentions were. We’re thankful for them.”

Christine Irish is another active organizer for the Romeo March for Racial Injustice, and estimates the event may draw several hundred people, but says it's hard to say.

“I actually know there are even former Romeo residents who this is so meaningful for them that someone's actually planning to fly home to be here for this,” Irish says. “Sometimes when there are marches in larger cities, it feels like we're preaching to the choir. The people who are seeing those protests are often already aware of the racial inequities in their communities. But the work of dismantling white supremacy and racism also needs to be done in majority-white communities, like Romeo.”

Irish and Taylor are working with other organizers to ensure that their march has secured the correct permits, and have been communicating with police, who are expected to escort the mask-mandatory march from Croswell Elementary School up Main Street, and will conclude at Romeo Village Park, where a vigil led by speakers from the community will take place.

“We don't want to be admonishing Romeo and saying Romeo is a racist community,” Irish says. “It's a community that we know, and we love, and that many of us grew up in. Our goal is to raise awareness of racial injustice, that some people may not have been aware of because we think generally people have good hearts. And if they're aware of what's happening, hopefully, they'll stand by and try and help us make the social change that we need.”

Taylor agrees. She refers to Romeo as a “good village” that loves its children, but admits — and hopes other Romeo residents can admit — that, collectively, they could be better.

"I'm hoping that this [march] pressures them and scares them — not in a negative way," she says. "Even if they don't align with our political views to allow us to come there and speak on these issues where we won't have a billion very racially motivated Facebook posts, where we won't have to have people guarding a rock for the simple respect ... we wanted to let the Black community in Romeo know that we see you and we hear you."

At the very least, she thinks that optics might help evolve perspectives in Romeo, and maybe then a shift in morality and ethical beliefs will follow.