Cloud bridge restored! Photo by Mara Cazers.
Davin Brainard (one of our favorite Detroit artists for the last decade, at least) posted an image yesterday on Facebook of a repainted mural spanning a bridge on West Grand Blvd. in Southwest Detroit. Area residents and fans of Brainard's work chimed in that they were so happy to see the mural return.

We were curious about the process and the original mural's history, as well as why clouds are so important to his work in the first place. So we sent over a dozen questions and Brainard replied in the following block of text, which we have reprinted verbatim.

Davin Brainard and the lift. Photo by Dion Fischer.

Dion [Fischer] and I first painted that bridge in 2010, sponsored by Southwest Solutions and their program manager Dan Loacano, as part of a neighborhood beautification project. Dion and Aliccia [Berg Bollig-Fischer] live on that street and wanted to make the bridge look nice, so they made the deal with Dan and asked me to help.

I have been painting and drawing a lot since the early '90s. There were always a lot of clouds in my work, and people really responded to them. Soon everything left some paintings except the clouds. I paint lots of other stuff too, but the clouds have become a thing. I have patches if you want one.

Dion and Aliccia want to keep their neighborhood (Southwest Detroit) nice, so they took it upon themselves to find grant money from somewhere to board up abandoned homes. They asked me to make some stencils of clouds, then they measured the windows, painted the boards, and boarded the windows. During this process of boarding up vacant homes Aliccia met Matthew Bihun, who she and Dion then partnered with for UFO Factory.

Today's clean-up and repainting was put together by Dan Loacano and Southwest Solutions, with money and volunteers from Quicken Loans. They paid for all the paint, the boom lift rental, and the lift operator. They also arranged for the Detroit Police Department to close the road so we could work.

We originally painted the bridge because it was covered in sloppy ugly graffiti. I think that many graffiti artists do excellent work; I just love all of the fonts that they come up with. They can be outstanding painters with a lot of potential. I love big paintings, I love colors and shapes. But the city is not a free-for-all; you can't just do anything you want anywhere you want it. There are lots of things that you can't do just anywhere you want. Try smoking a cigarette in the Ren Cen, and see what happens.

"Street art" to me means unauthorized. The Cloud Bridge is not street art; it is public art. We have been sanctioned by the city of Detroit to paint the bridge.

I love painting and I love clouds. I am going to keep painting them and if anybody wants some just let me know. But I promise to never paint a cloud on your stuff unless you ask me to. 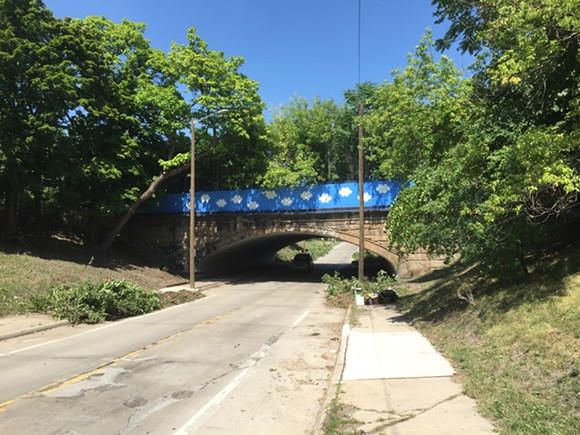