Former Piston Dennis Rodman explains how he broke his dick 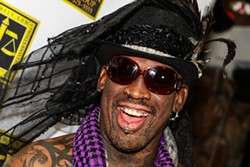 Dear readers, it's time to get reacquainted with Dennis Rodman.

One of said instances did in fact happen while he was playing for our hometown Pistons, which begs one to wonder if that's why he fell just short of the infamous tip-in that would have clinched the 1988 Finals. Hard to jump with a shattered penis. A boy can wonder.

The medical term, we learned, is "Contused Penis Syndrome", and apparently it took eight different doctors in the room to figure that out. College educations literally hard at work. Get it? Hard... nevermind.

Dismantling your genitals can apparently have it's benefits, however, as pictures of alleged broken dick were sold to papparazzi for a $25,000.

He's now taking it all with a grain of salt, or multiple pills, actually, and get's right back to work.