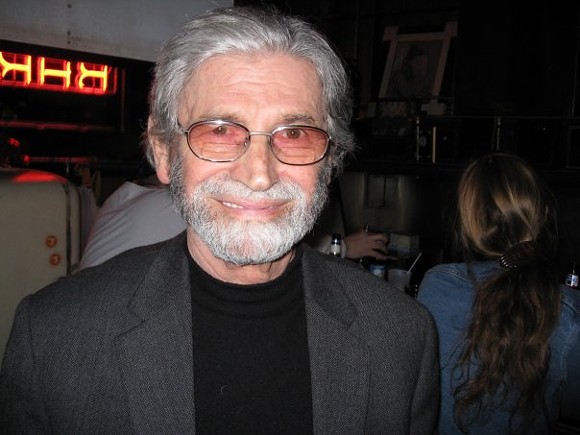 Photo by Michael Jackman
George Cvetanovski on the night his bar turned 32 years old.
After almost 40 years in business, George Cvetanovski, the owner of Hamtramck’s Seven Brothers Bar, is heading into retirement. But there is still time to enjoy the timeless bar, which has been a haunt for Detroit’s improv and theater crowd since Planet Ant Theater opened in the mid-1990s.

Anybody who’s hoisted a drink at Seven Brothers knows that its walls are lined with glossy 8-by-10 photos, old theater reviews, and playbills going back 20 years. The best time to visit the bar was after a show at Planet Ant, if only to watch a bunch of charged-up local performers blowing off steam. And Cvetanovski didn’t just cater to the theater folks; he supported them, and was often seen in audiences at Planet Ant Theater.

But when Cvetanovski broke his hip earlier this year, the months of recuperation played into his desire to finally embrace retirement. And yet, when the bar closes, as is scheduled to happen July 15, the unusual relationship between the tavern and the theater will continue. Planet Ant is in the process of buying the bar and its liquor license, and has plans to use the bar as a practice space, for special events, and maybe more.

Planet Ant and Seven Brothers longtimer Inga Wilson tells us, “George will be continuing in an advisory role. He really loved the idea of the two businesses coming together: his actor bar, and the theater he has been supporting for the last many decades.”

You see, Planet Ant has already acquired two buildings, the Taj Mahal Indian Cuisine at 2314 Caniff St., and BHA Hall at 2320 Caniff St., across the street from its black box theater. Plans call for transferring the Seven Brothers liquor license into this shared space, and perhaps using the theater’s one-dozen one-day liquor licenses per year to open the bar from time to time. Even the historic bar at Seven Brothers could wind up moving to Planet Ant’s new spot.

Wilson says, “There’s still going to be the tiny intimate theater space in the purple building across the street, but then we’ll have some more improv, be able to do some more stuff with bands, more community events, and to have some of the bigger musicals over in the new space at the BHA.”

But until the purchases, transfers, and moves are finalized, it should be a rather busy time for the 39-year-old bar, which still opens at 8 p.m. just like as it always did — for now. With bands, movie nights, a special Seven Brothers-themed story slam, card tourneys, karaoke Fridays and Saturdays, and more. Below is a list of planned events through the end of June. Check the bar’s Facebook page for start times and late-breaking additions.