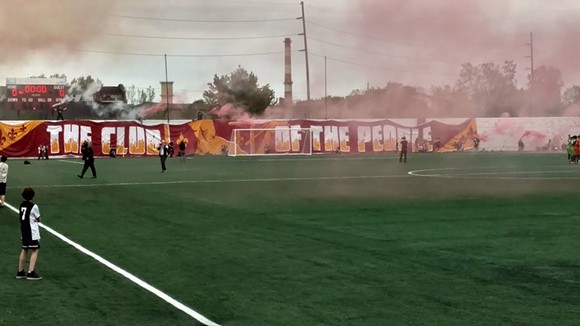 Photo courtesy Jimmy Doom
The action at Keyworth involved high spirits, volume, and plenty of colored smoke.
Friday night saw the inaugural game of the Detroit City FC at Keyworth Stadium in Hamtramck. It drew more than 7,000 soccer fans into the postage-stamp-sized town of 22,000. In other words, for a few brief hours, the city's population expanded by almost one-third. That's a big deal, and I knew we should write something about it. But I wanted to wait until Monday morning to let some of the details filter in.

I mean, it's nice to get a piece of writing online in the immediate wake of the game, but the quickest reaction isn't always the best. Take a look at the Free Press story, which came out the day after: It incorrectly identifies well-known Hamtramck guy John "Hippo" Hypnarowicz as "John Hipple," misidentifies Srodek's as a restaurant (it's a deli that doesn't even serve hot food), and calls the main drag of Hamtramck Joseph Compau. Yikes! Ex-Freep copy editor Dan Austin's talents were clearly irreplaceable.

Screen grab of Free Press page online
Can you find three things wrong with this paragraph? If you can, you're more than qualified to be a copy editor at the Free Press.
I didn't think I'd be free that night, but I was at a bar on Hamtramck's south side. Normally, the bar would be a sleepy scene around 6 or 7 p.m., most of the barstools empty except for the after-work regulars, but on Friday it was noticeably busier, and it was obvious that the extra customers were there for the soccer game.

The parking lot turned out to be a good place to see people trickling into town for the game. The police had blocked off Roosevelt, perhaps because too many people were driving down the street and not finding parking, my friends and I guessed.

Lots of the fans walked. I'd seen some fans walking toward the game from several blocks away. (I could tell they were fans because they were dressed in gear and carrying banners.) I saw more fans biking in. One pal even tells me he saw somebody ride a skateboard to the game.

And yet, some fans probably learned a thing or two on Friday, namely that it might not be a good idea to drive in alone in that super-duty truck with a crew cab and have to drive around and around trying to find parking for all that vehicle.

A hush began to descend over the bar as the soccer crowd filtered out of the bar and over to Keyworth Stadium. It was sort of eerie to hear the chants echoing off the walls all over the south side of Hamtramck, being able to feel the energy and hear the noise from a few blocks away.

After the game, the bar filled up with revelers, and was as crowded as on, say, Paczki Day, with plenty of friendly and familiar faces from Detroit suddenly in Hamtramck for a change. In fact, this Detroit away team was very kind, and bought me perhaps one drink too many on this boozy Friday night.

A general consensus from some Hamtramck residents within earshot was, "This changes everything." Another friend's comment hit home: Just like that, Hamtramck has become Wrigleyville. One even said we'll be discussing Hamtramck with qualifiers like "pre-DCFC" and "post-DCFC."

We heard from one friend, who went to the game, who thought the games would certainly result in pushback from the city. He worried that the noise and litter would mean certain complaints from the nearby homeowners. In fact, one apparent Northern Guard supporter on Twitter, ‏@SergeantScary, tweeted about a need for more respect for the team's new home: 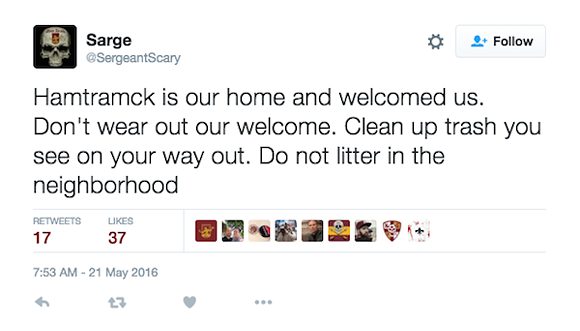 Screen grab from Twitter
Will this cause grumbling? I'm not so sure. By all accounts, the soccer fans were well-behaved, and a tight group of fans can likely be educated about issues like littering. They want to see their team succeed, and if they'll wear scarves on a broiling day to do it, they might even pick up other people's spent smoke bombs.

As for the noise, who knows? Can you really buy a house next to a sporting stadium and then complain about the levels of noise?

Furthermore, any discussion of noise in Hamtramck has been colored by the many complaints over the Muslim call to prayer, which some residents complain is too loud. (And many Muslims feel complaints about the volume are, in fact, more about harassing the Muslim community and less about preserving peace and quiet.)

Personally, that's something I'm eager to know. Will the same people who've been calling in to complain about the call to prayer also be calling about the mostly white screaming and yelling soccer crowds? One of our fellow drinkers joked about it as the chants drifted across the summer air, imitating some batshit-crazy resident on the phone, screaming, "I can hear it over my vacuum cleaner!" to much applause and laughter.

But aside from a few snide jokes by a couple of malcontents at a south side bar Friday night, most of the reactions, at least those we've noticed on social media, are indeed glowing. As a Hamtramck resident and taxpayer, I believe I'm entitled to join the chorus of voices welcoming DCFC to town. Nice to have you as our new neighbor!