Review: Detroit goes wild for Cage the Elephant at the Masonic Temple 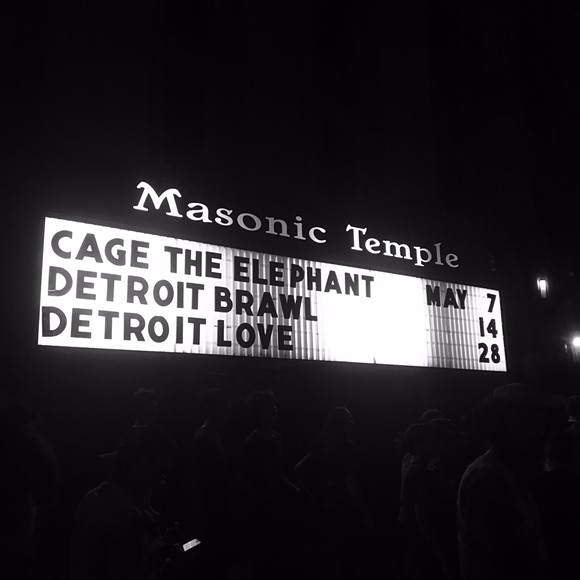 Photo by Jack Roskopp
Hailing from Bowling Green, Kentucky, Cage the Elephant are slowly proving that they are on their way to being the next great American rock n' roll band. From bluesy guitar solos to dozens of fans crowd surfing in the abyss, it was a rare moment where we saw that the spirit and drive of rock music is still a force to be reckoned with.

See 23 photos of the show here!

The evening started out with Oklahoma indie rockers Broncho. This must have been a huge opportunity for them to play in such a large venue like the Masonic Temple and with Cage the Elephant. We're excited to see what's in store for this band in the future.

Next up was Portugal. The Man, a band I was very excited to see. After missing their set a few years ago at Lollapalooza because I decided to see Iggy Azalea instead (I KNOW, SO MANY REGRETS, AND I'M SORRY MT READERS. Also, this was on the heels of "Fancy" being the biggest song in the world, so we were all blindly sipping on that cultural appropriation juice and I have since repented my sins). ANYWAY, Portugal. The Man were great. Lead singer John Gourley has a falsetto voice that actually made me question wether it was a girl singing or not. Their music is trippy and out there, just like the state of Alaska, where they are from.

When Cage the Elephant finally took to the stage, the audience was ready for some head-banging, move your feet music. Opening up with some songs from their latest release Tell Me I'm Pretty got the crowd warmed up for what was to come: their amazing back catalog.

Songs like "Take It or Leave It," "Aberdeen," and radio hit "Ain't No Rest for the Wicked" brought the energy in the theatre to new levels. Not only was the main floor swaying back and forth the entire night, but people were crowd surfing all night long. Just when I thought that security had finally calmed the surfers down, another girl in her early 20s was hoisted up and carried to the front of the stage into the pit. The crowd was loving it, and Cage the Elephant was just feeding off of the energy. It was like a ping-pong match – the crowd and the band bouncing back the energy and enthusiasm.

Lead singer Matt Schultz has to be one of the best frontmen touring today. He has a swagger like Mike Jagger when he moves across the stage. He bangs his head hard, dances like a fool in love, and really gets into the crowd's face. The band has a real feel for bluesy rock music, but they sprinkle in elements of hard rock, alternative, and classic rock. It's as if the Rolling Stones and The Pixies had a baby.

Closing out with hits like "Come a Little Closer" and "Cigarette Daydreams," the audience was just asking for more. This tour is a major mark in the band's history. They are on the cusp of being a mid-tier festival band to possibly headlining in just a few short years. Just like their song, there is no rest for Cage the Elephant.