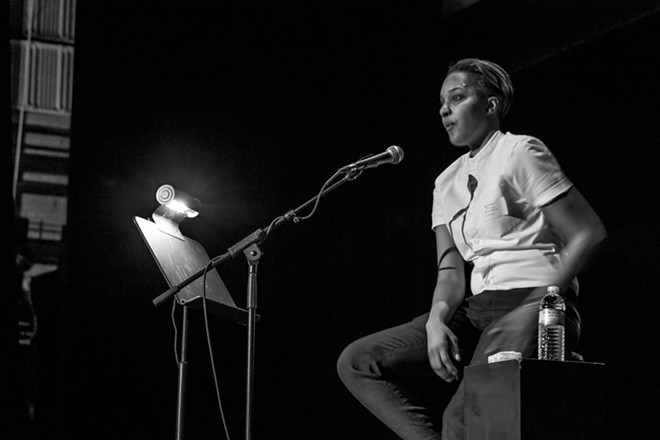 Monday’s daily death toll revealed that 946 people have died in Detroit since the coronavirus outbreak began to ravage the country last month, adding to the state-wide total of 3,407 COVID-19 deaths.

Due to state-imposed social distancing measures and restrictions on gatherings of more than 10 people, funerals, memorials, and viewings look much different than they did just six weeks ago — and so does grief.

Natasha T. Miller, a poet and founder of Detroit’s Science of Grief program, says she can’t imagine losing someone and not being able to be with them in their final moments, or to seek comfort from family members — both healing experiences so many have been denied.

“As somebody who has lost somebody, I couldn't imagine not being able to be there in their last moments,” Miller says. “So for me, personally, that's something that I think should be discussed.”

“From not being able to be with your loved ones while they're leaving, to not being able to hug your loved ones and that comfort that you find when someone passes away, and everyone shows up to the house with food and music and then you have the funeral where you can hug people, you know, there's no sense of community and all of that is lost,” Miller says. “So this will completely change the way we kind of process and deal with these ceremonies moving forward.”

Miller, who serves as the community engagement manager at Michigan State University’s Detroit Science Gallery, founded the Science of Grief program in 2017 following the death of her brother as a means to redefine and own her grief.

In past iterations, the free 14-hour overnight event has been held at the Detroit Institute of Arts and invites a mix of performers, artists, poets, and storytellers, as well as those who do not fit in any of those categories who wish to share their experiences and learn more about their own grief through the stories of others. For the live event, there are also clergy people, therapists, and nonprofits on-site to assist those who may need some more focused and personal guidance.

The third annual Science of Grief event was set to take place earlier this month and has been forced to postpone due to the pandemic. The DIA has been closed since mid-March in compliance with the governor's executive order.

That's when organizers of various international Science Gallery chapters decided to partner together to bring the experience online, something they had already been in the process of launching before the COVID-19 crisis. Instead of holding off, Science Galleries of Dublin, Atlanta, and Detroit teamed up for a virtual, three-hour event starting at 3:30 p.m. on Wednesday, April 29 via Science Gallery Dublin's YouTube channel followed by an Instagram live dance party hosted by DJ John Collins.

“We know the grief that the whole world has been stricken with at this time and we decided, let's not give up on it,” Miller says. “Let's do something for ourselves and for other people.”

Detroit's hour-long contribution to the virtual event will feature local poet Omari Barksdale, who will touch on loss after COVID-19, as well as a discussion led by neuroscientist Dr. Yewande Pearse, who will speak to the impact of grief on the mind and body. Dublin will showcase Irish performers, while Atlanta will have academics and healthcare workers to discuss COVID-19 from the frontlines.

Miller says that the program has changed a lot since 2017 and has grown to include more expansive facets of death, grief, and various coping mechanisms people develop, as well as the many ways in which different cultures mourn, or in some cases, celebrate. She also thinks that the online event will spur a greater conversation within Science of Grief programming, which will not only be limited to the physical loss of a person but “all of the moments” we have lost to the COVID-19 pandemic.

She credits the program for the evolution of her grief, which for years was rooted in reliving the immediate feelings following her brother's death as a way to connect to him, comforted by the belief that by subjecting herself to repeated sadness that maybe she could reverse what had happened. Miller also said the Science of Grief helped her release self-inflicted shame she felt for grieving for so long. Now, she says she has more joy inside her body than pain and finds new ways to remember him while he was alive.

“So I think it helped me to own my grief, to say that this is mine. It belongs to me. And you know, if in 10 years from now I'm still sad or I want to talk to somebody about my brother and tell the same stories, that's OK because that was my brother,” Miller says. “I will always miss him. But yet when you're around hundreds of other people who are talking about the people that they lost, you recognize that life and death, that's just a part of the design.”

The Science of Grief begins at 3:30 p.m. on Wednesday, April 29 and can be viewed on the Science Gallery Dublin's YouTube channel. DJ John Collins will be featured on Instagram Live at 6:30 p.m. via Detroit Science Gallery Detroit.

We have a new events newsletter! Find out the best things to do in the area every Thursday morning in your inbox.
© 2023 Detroit Metro Times