Begging for answers: Eight teachers were just fired from a Detroit charter school without cause or notice

While Lansing debates the best plans for Detroit Public Schools, few are paying attention to the turmoil in the charter sector.

ETAB AHMED WAS staying after school to work on her math homework one unusually warm November afternoon this past fall. She, however, couldn't concentrate. Earlier that day she had been called into the principal's office, where she was asked to copy and sign a document. Etab didn't understand all the words she wrote out, but they seemed to have to do with finishing high school, and that made her giddy.

When Etab, a soft-spoken and polite 20-year-old, moved to the United States from Yemen in 2010, she struggled with school. While she knew she wasn't stupid, most days she couldn't help but feel that way; not only was Etab having a difficult time learning English, but she was two years older than the majority of her peers. After her first school, O.W. Holmes, was closed by Detroit Public Schools' emergency manager Roy Roberts in 2012, she transferred to Universal Academy, a K-12 charter school on Detroit's west side, and at 17 she was placed in the ninth grade.

Etab says that despite these obstacles, she's maintained one goal: to graduate. And this year — her senior year — it looked like the diligence was paying off. She had earned all A's on her latest progress report, and now the school's principal Uzma Anjum had called her and her dad, Hakim Ahmed, in to talk about graduation and a new word Etab had learned that day, but still didn't quite understand.

"Miss?" she turned to her teacher Asil Yassine whose classroom she was working in. "What's a GED?"

Yassine, a second-year teacher at Universal, says she was surprised by the question and explained that a GED was a high school equivalency diploma, a way for people who didn't finish high school to still get credit. "You don't need to think about that, though," she laughed.

Universal Academy, a K-12 charter school on Detroit's west side.

Sitting on a plastic-covered couch in her family’s living room, Etab is shaking as she recalls what happened next; how she started crying as she told her teacher about the statement she had written out and signed hours earlier.

"I am Etab Ahmed want to finish the high school through GED. And do not want to continue at Universal Academy - Etab Ahmed 11/10/15"

Still visibly upset nearly six months later, she explains how she thought a GED was some sort of dual enrollment program; something to help her get a college and high school diploma simultaneously.

"The school is taking advantage of them because they think they don't know how to read or write and talk," family friend, Yeasser Said, who helped Etab’s dad translate the statements interjects. "For them, it's just business and money. They don't get funds for Count Day? Snap! Come sign this paper."

While Michigan’s School Aid Act says a general education student must be younger than 20 as of Sept. 1 to be eligible for state funds, the reality is, according to Casandra Ulbrich, the vice president of the state Board of Education, a high school diploma may be awarded regardless of a person's age, and a school can continue enrolling a student sans per pupil funding if it so chooses.

The school had collected the state per pupil allowance for Etab for three years — a total of more than $25,000 — and now it was pushing her out with little more than a "good luck." This, and the fact that Etab was seven months shy of graduating, disturbed her teacher, Yassine, who at the time decided to follow up. 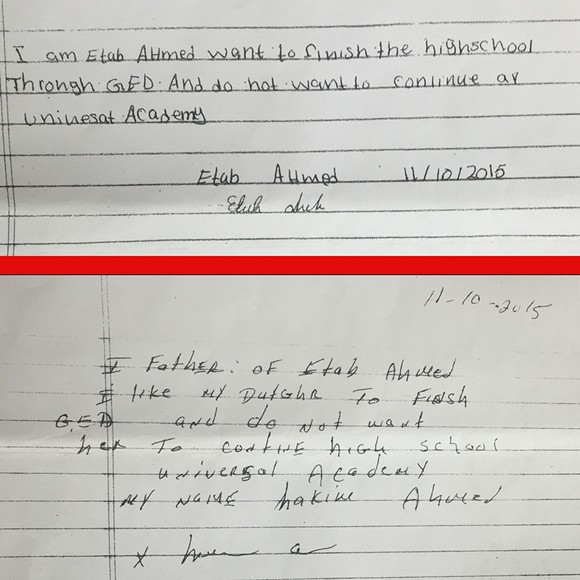 Documents courtesy of Hakim Ahmed.
Etab Ahmed and her father Hakim were both asked to copy the above statements. Neither understood that this meant the 20-year old was withdrawing from high school.

"I am struggling to understand how this incredibly bright, hard-working student who fully deserves a diploma from Universal Academy can be removed so suddenly from her education," Yassine wrote in a Nov. 14 email to Nawal Hamadeh, the superintendent of the school and CEO of Universal Academy's management company, Hamadeh Educational Services.

"Could you please send me a copy of the federal or state law or HES board policy that describes why this student is too old to stay in school?"

Yassine says she received no response.

As she'd soon learn, this lack of transparency is a norm.

Three months later, on Feb. 12, Yassine was one of eight teachers who were fired, via email, from Universal Academy.

Just as she never received answers from Hamadeh as to why Etab was pushed out, she and the other teachers who were fired have yet to find out why they were let go. They have suspicions, sure ­— six of the eight teachers who were terminated attended a board meeting on Jan. 26, where they tried to draw attention to problems they believed were adversely affecting the school culture and students. But, nothing could be confirmed. Their termination letters simply reiterated that they were hired at-will and could be terminated "at any time, with or without cause, and with or without notice."

Today, substitutes and teacher's aides have assumed the roles of the missing teachers, and the issues discussed at the January board meeting — inconsistent discipline and a lack of support for English language learners ­­­— have been exacerbated, according to parents, students, and teachers interviewed by MT. As Yassine, and those within the Universal community have discovered, educators and kids can be expendable, especially when a school is manned by a for-profit management company and an appointed board, who have little to no accountability to the public.

WHILE WE'VE HEARD about teacher sick-outs, corruption indictments, and dilapidated buildings within Detroit Public Schools in recent months, there has been no news of the teachers being fired at Universal.

This is partly due to the fact that each charter school is something like a sovereign nation, and therefore difficult to monitor. It also has to do with the state's molasses-pace when it comes to enacting charter accountability reforms.