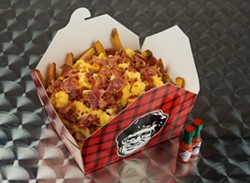 Smoke's Poutinerie/Facebook
The "Hangover" poutine.
Poutine is officially an international sensation, so much so that Canadian fries/curds/gravy purveyor Smoke's Poutinerie is gearing up a Midwest expansion, including locations in Detroit, Ann Arbor, and Lansing.

Baetens says the particulars over when and where the first Midwest location will open haven't been announced, but it should happen sometime this year. We're also working on confirming details ourselves and will be sure to provide any updates.

Smoke's offers a variety of proteins (chicken, steak, pork, beef), as well as vegetarian options, its own signature gravy, and Quebec-style cheese curds.

We Detroiters have long enjoyed poutine, thanks to our proximity to the border. A growing number of eateries all over the metro area already serve their takes on the dish. No doubt there will be an appetite for this  "gravy train."