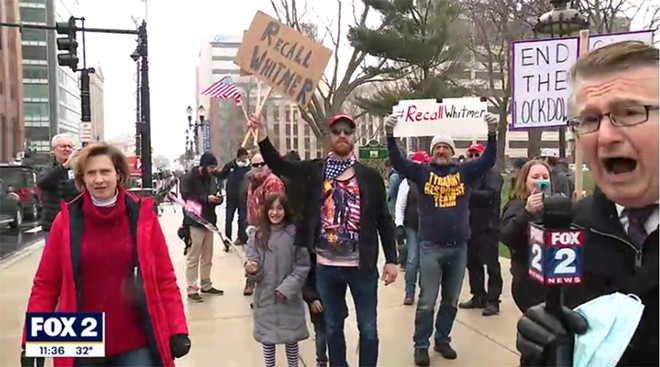 Screengrab/ WJBK-Fox 2
Royal Oak City Commissioner Kim Gibbs, in red, was spotted at Operation Gridlock. She could be seen repeatedly leaping out of the camera frame in a Fox 2 segment.

Originally conceived as a "drive-through" protest in opposition to Whitmer's expanded executive order, which critics say is excessive and hurting small businesses, organizers advised people to stay in their cars so as not to spread the coronavirus. Nevertheless, the protesters rebelled against the protest's own organizers, with many getting out of their cars and gathering in front of the Capitol building. Many did not wear face masks, and many stood closer than six feet apart — including Gibbs, who was spotted walking around. That's her in the red coat in the photo above.

Gibbs seemed to be aware that it would look bad, and can be seen repeatedly jumping out of the camera frame in a WJBK-Fox 2 segment.

In an email provided to Metro Times, Royal Oak Mayor Michael Fournier said that he received an "outpouring of concern regarding the irresponsible actions" of Gibbs, and that he "personally asked" her "to consider resigning." He also asked the City Attorney "to provide the commission information to consider regarding removal, recall, and censure."

In an email, Fournier confirmed to Metro Times that he asked Gibbs to resign. He also posted a statement on Facebook:

"Royal Oak officials are briefed every day with the newest information regarding the pandemic," he wrote. "... We see the seriousness of the situation and how following the executive orders will preserve life and get us closer to recovery."

Gibbs told The Royal Oak Tribune that she was not participating in the protest, but that she supported it. "I am extremely concerned about Michigan's small business owners," she said.

Gibbs said she believed she did not pose a risk of transmitting the disease. "I'm not a doctor, but my personal belief is that the people who got it, or are going to get it, have already gotten it, so let’s get back to work," she said, adding that she believed "when you are out in the air, the air disperses it. I didn’t feel in danger."

She also told the Tribune that she has "maintained and will continue to maintain a 6-foot distance from people at all times, as recommended" — though that statement is clearly at odds with the photos and video showing her standing close to other protesters.

Gibbs did not immediately respond to a request for comment.

Following the protest, Whitmer said she was "disappointed" in the protesters and said that their actions could have spread the virus further and cause her to further extend the stay-at-home order, which is currently set through April 30.

Royal Oak has seen 14 COVID-19 deaths. Oakland County has the second-highest number of coronavirus cases in Michigan after Wayne County, with 3,792 confirmed cases and 330 deaths.

Michigan has the third-highest number of coronavirus cases in the country, with more than 27,000 cases and nearly 2,000 deaths.

You can read Mayor Fournier's and Gibbs' statements below.