There’s been a spike in people dying at home in cities like Detroit. That suggests coronavirus deaths are higher than reported. In recent weeks, residents outside Boston have died at home much more often than usual. In Detroit, authorities are responding to nearly four times the number of reports of dead bodies. And in New York, city officials are recording more than 200 home deaths per day — a nearly sixfold increase from recent years.

As of Tuesday afternoon, the United States had logged more than 592,000 cases of COVID-19 and more than 24,000 deaths, the most in the world, according to the Center for Systems Science and Engineering at Johns Hopkins University. But the official COVID-19 death count may, at least for now, be missing fatalities that are occurring outside of hospitals, data and interviews show. Cities are increasingly showing signs of Americans succumbing to the coronavirus in their own beds.

Experts say it’s possible that some of the jump in at-home death stems from people infected by the virus who either didn’t seek treatment or did but were instructed to shelter in place, and that the undercount is exacerbated by lack of comprehensive testing. It’s also possible that the increase in at-home deaths reflects people dying from other ailments like heart attacks because they couldn’t get to a hospital or refused to go, fearful they’d contract COVID-19.

Mark Hayward, a sociology professor at the University of Texas-Austin who’s an expert on mortality statistics, said all of those deaths are part of the “overall burden of the pandemic.” He said an uptick in deaths, specifically in ProPublica’s findings for Massachusetts and Detroit, indicates an undercount is occurring.

You should think about the official coronavirus death counts, he said, “as just the tip of the iceberg.” The quality of the deaths data will improve as testing expands and fewer people die without getting tested, he added.

The reason having accurate death statistics is important is because they help signal the location of hot spots and prompt officials to deploy resources. Knowing someone died of COVID-19 also enables health officials to alert their contacts so they can quarantine themselves.

New York City was among the first to provide data on at-home deaths. Officials said last week that roughly 200 residents were dying each day outside of hospitals and nursing homes. That’s compared with about 35 per day on average between 2013 and 2017, according to city records.

ProPublica found similar patterns beyond America’s largest and most hard-hit city. Our review examined parts of states like Massachusetts, Michigan, and Washington state, drawing upon information from vital-records departments, health agencies, 911 call centers and police departments. ProPublica then compared those findings with historical deaths provided by the federal Centers for Disease Control and Prevention.

In Middlesex, Massachusetts’s most populous county and home to Cambridge, Somerville, and Lowell, officials reported 317 at-home deaths in March. That’s about a 20% increase from the same time period for the past three years, in which deaths ranged from 249 to 265. In late February, a Cambridge-based biotech firm hosted a conference in nearby Boston that was later reportedly linked to more than 100 infections; it’s unclear if anyone died.

In Detroit, authorities responded to more than 150 “dead person observed” calls in the first 10 days of April. It was around 40 during the same period for the past three years.

Older people are particularly vulnerable to dying from COVID-19. In all of Massachusetts, deaths for people 65 and older increased by 3.6% in March from the same month, on average, during the previous three years. The comparison to 2019 was particularly dramatic, an additional 250 deaths across Massachusetts. At the same time, the data shows that increase can’t be accounted for by the official coronavirus tally alone: only 89 deaths statewide were attributed to the virus in March, according to state Health Department data.

In Detroit, authorities responded to more than 150 “dead person observed” calls in the first 10 days of April. It was around 40 during the same period for the past three years, according to city 911 call data. Almost all of the incidents in this year’s period occurred in areas where the median household income was less than $45,000, census data shows. Lower-income areas have been particularly hard hit by the coronavirus.

While specifics of each death weren’t available, a review of Detroit radio transmissions revealed instances of individuals found “dead on scene,” such as a March 31 call to a low-income apartment complex northwest of downtown. “Use your precautions here,” said the dispatcher after broadcasting a medical code but few other details. Detroit-area officials couldn’t immediately provide totals on at-home deaths. 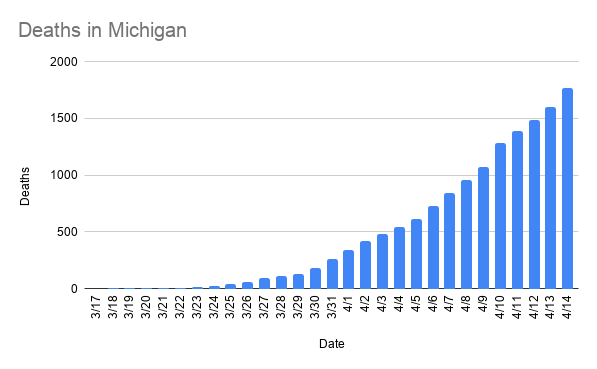 In other parts of the U.S., 911 calls for medical assistance have dropped. In Seattle, an early epicenter of the pandemic, data shows that EMT and paramedic calls dropped by more than 25% in the first 10 days of April compared with the same time frame last year. It’s unclear how much, if any, of that drop is due to people being fearful of interacting with the health care system.

Guidance from the CDC says that coroners and medical professionals can list “probable” or “presumed” COVID-19 on death certificates in cases where the symptoms match, even if the person wasn’t tested. For the most part, official death tallies from the disease haven’t included people who died before they were confirmed positive.

Bureaucratic delays and restrictive laws are also contributing to an incomplete picture. Some state officials told ProPublica it would take weeks to provide complete death numbers because of thin staffing or antiquated computer systems. In California, a Health Department spokesman said a request for detailed figures on statewide deaths would take a month to process and would cost $325. (ProPublica plans to pay for it.) Hawaii has suspended the processing of public records.

When a city’s health care system is overwhelmed, the true scope of deaths due to the pandemic is easily missed “in the fog of war,” said Lorna Thorpe, director of the epidemiology division at New York University’s Langone Medical Center. The official numbers provided by health departments are imperfect, she said, and mostly used for “situational awareness” to show which areas are hardest hit.

“One of the reasons we count deaths is to allocate resources to where they need to go,” said Robert Anderson, the chief of the CDC’s mortality statistics branch. “It becomes a little more time-sensitive when you’re dealing with something like a pandemic.”

He said it’s particularly important to catch potential hotspots before they explode. If officials can direct adequate resources to places early, “maybe we can keep things from going crazy.”

Given that the U.S. doesn’t have enough tests in the first place, the majority of the screenings are “probably marked for people who are alive,” and the shortage is particularly acute in rural areas with few confirmed cases, said Hayward, the University of Texas professor.

The CDC is logging COVID deaths by collecting death certificates from every state, territory, and the District of Columbia, a meticulous process that involves time lags and is vulnerable to errors. Hayward, who is part of a CDC advisory council on vital statistics, said the quality and speed of the data coming in varies so much that it can feel like wrangling reports from more than 50 countries.

Even for routine illnesses like the flu, the national count based on death certificates is always an underestimate. The CDC uses a model that adjusts for the real toll of flu deaths every year, Anderson said, and his staff will create a new model for the coronavirus by comparing the total deaths recorded in the past few months against historic death rates.

At the beginning of the pandemic, “the undercount is going to be really high,” Hayward said. “I couldn’t give you a number. There is no good news on that front.”

ProPublica is an independent, nonprofit newsroom that produces investigative journalism for use by other media outlets.