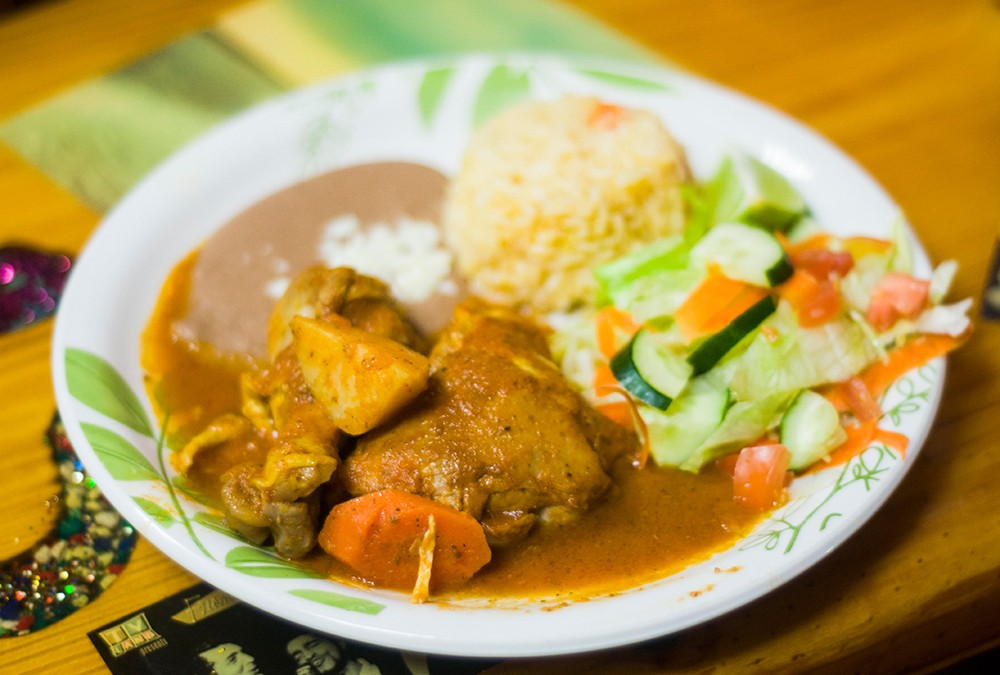 I asked Buena Fe co-owner Jose Barrientos why Salvadorian pupusas are a little different from those I've tried at Honduran spots in Detroit. At Buena Fe, they're noticeably lighter, I told him.

Barrientos is, of course, Salvadorian, and there's some pride in his statement. We'll avoid the argument of which nation makes them better, but, regardless of their country of origin, pupusas are thick corn tortillas filled with savory meats, cheese, and/or beans. The masa packages are fried in oil and are traditionally topped with a crunchy, pickled cabbage slaw called curtido that's composed of shredded cabbage, carrots, oregano, and onions that soak in apple cider vinegar or are fermented.

The pupusas seem to be a bit lighter at Buena Fe, and that's a good thing. They can be filled with beans, cheese, pumpkin, salty pork rinds, or loroco, an edible, green flower common in Central America. The restaurant, which fries its pupusas in a small space on Nine Mile Road in Oak Park — just over the border from Ferndale — is the area's only pupusa-maker.

Jose and his wife, Yaneth, took over the restaurant about a year ago. Yaneth cooks while Jose manages the front of the house, when he isn't driving a truck for his other job. The pair moved here from El Salvador around 20 years ago, and Yaneth ran the kitchen in a Farmington Hills restaurant for 15 years.

Yaneth's repertoire isn't limited to pupusas. As a matter of personal preference, I would start with the simple pollo a la plancha, a thin piece of chicken that Buena Fe chars after marinating in a super flavorful sauce, which, if I had to guess, is some mix of orange juice, lime juice, olive oil, garlic, and plenty of oregano and salt. This is an early contender for the top 10 plates of the year list.

Also excellent is the panes rellenos. Have you ever tried a Salvadorian chicken stew sandwich? It's even more sloppy than it sounds — probably worth going at this one with a fork — but that's more than made up with its taste. The package consists of soft, crusty bread stuffed with chicken stew composed of several chicken thighs on the bone that are soaked in a piquant, aromatic-packed, sofrito-based sauce. The bird sits atop curtido, tomatoes, cucumber, radish, lettuce, and mayo. If you don't want your chicken stew in sandwich form, the pollo guisado is Salvadorian chicken stew in plate form.

Buena Fe's sopa de gallina is effectively a giant bowl of fried chicken soup, or "hen soup," as it's billed. The crispy fried hen is served on the side with a mound of rice, and it should be pulled apart and placed in the broth. Serving it on the side helps preserve the chicken's texture and flavor. The bowl holds glistening broth filled with big pieces of carrot, yucca, onion, and zucchini.

The tamales come wrapped in deep green banana leaf, and the corn dough is thicker than those of Mexican tamales. This is a comfort food, as it's filled with chicken, potatoes, and green beans. Mix and mash that with the tomato sauce and curtido served on the side.

Buena Fe offers rotating specials, and Yaneth serves breakfast all day with Salvadorian plates like pupusas alongside eggs or loroco. The horchata is packed with cinnamon, and the Kolashampan, a Salvadorian pop, is so packed with corn syrup that it's a good dessert.