About a decade ago, Hamtramck's Pizza Amar struck gold with a pretty simple-but-brilliant formula: Bangladeshi flavors on pizza. Amar got the attention and success that it deserved, so much so that a few years ago it moved from its tiny spot on Conant to a slightly larger building in a different part of town.

The old Amar spot sat empty until 2018 when signage for Ali's Pizza and Burgers went up outside the shop. Ali's follows in Amar's footsteps in some regards, though it's broadened its scope to include pies with toppings like chicken shawarma, shrimp rangoon, and chicken 65. The pizzas can be intense flavor bombs, to be sure, but they're not even Ali's best territory. Nope — far and away, the best bites at Ali's are found in the chicken 65 sandwich.

For the uninitiated, chicken 65 is typically a deep red stir-fry of spicy chicken, onions, and a red chili-based sauce that's served over rice. Its origins are disputed, but some claim it was invented in 1965 by a chef who ran a famous kitchen in an Indian hotel. Regardless, it's considered something of a street food that's popular in Bangladesh, the Indian subcontinent, and ... Hamtramck. Not all of the city's Bangladeshi restaurants serve it, and none, except Ali's, put it in sandwich form.

To create that iteration, Ali's chef Ihtriam Ali takes a thick piece of chicken breast and marinates it overnight in a blend of chilis and spices. It's then double-coated in starch and fried, leaving it with a thick, crunchy crag. That's coated in a semi-spicy 65 sauce, though Ali notes that the sauce is there to amplify the bird's flavors. It's finished with a mix of sauteed tomatoes, jalapeño, and onions, and held in a soft, basic bun. (Note: Ali's calls it a "burger" — as in, on the menu it's a Chicken 65 burger, though it's really a fried-chicken sandwich.)

No Michigan city produces more good sandwiches per capita than Hamtramck. On Conant Avenue alone, there's Boostan, Famous Subs, Hello Shawarma, and more. Those are Yemeni-owned shops that trade in what's a mash-up of Yemeni, Mediterranean, and American cuisine, and Ali's chicken 65 sandwich stands up to anything else served along the mile-long stretch. It's hard to think of many superior fried-chicken sandwiches in metro Detroit in general, and it seems I'm not the only one who feels that way — Ali says his business didn't take off until he rolled out the chicken 65 sandwich last summer.

If you must have more 65, Ali's does big baked chicken 65 wings that are tasty, though I would've liked them with a little more 65 sauce. Also solid is the tandoori chicken "burger" that consists of a piece of grilled chicken breast covered in a tandoori-spiced sauce with lettuce, pickles, and onions.

The pizza also ain't half bad. Ali's is the umpteenth pizzeria in and around Detroit to open during the last two years. It doesn't spend two days fermenting and making its dough, as does Grandma Bob's. It doesn't own a farm at which it grows and raises plants and animals for its toppings, as does The Bricks. It's not Detroit-style pizza, and there aren't a bunch of fancy cheeses. In short, Ali's is fast-food pie — it's the unique Bangladeshi, Mediterranean, and Chinese toppings and flavor profiles that make it worthwhile. 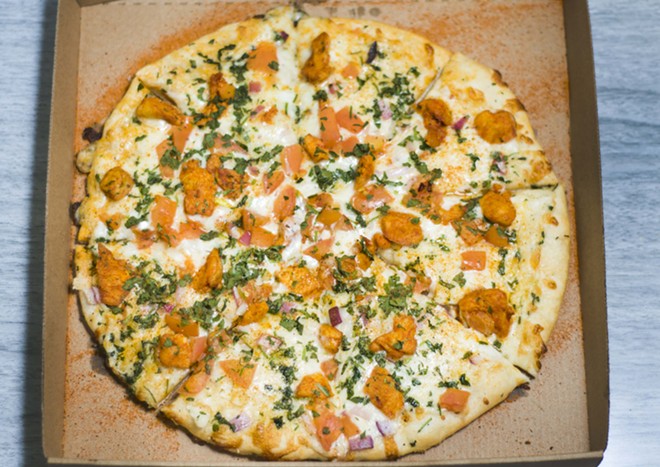 Among the best is the spicy pizza that comes covered in a thick layer of marinated ground beef, diced red onion, cilantro, and chili pepper flakes. The Naga pizza is a close second — Naga refers to a region and people in the Indian subcontinent, and when applied to food in Hamtramck it means fiery chilis with a hint of sweetness. The Naga chicken has just enough bite, and it's accompanied with cilantro and onions. There is, of course, a chicken 65 pizza, which is topped with chicken 65 sauce, diced red onions, cilantro, and chicken. Ali says he whips up his own version of the 65 sauce and almost all other sauces that the restaurant serves.

The butter chicken pie offers sweet-ish bird that also holds a buttery element and arrives with cilantro and diced red onions (there's a pattern here). We got the butter chicken in deep-dish form — as a rule at Ali's, the deep dish is superior to round. The chicken shawarma pizza is made with chicken, garlic sauce, onions, tomato, and cajun crust. While it's not short on flavor, I would love to see Ali's use the shawarma off a spit instead of the precut stuff. We also ordered a Buffalo chicken pie with Buffalo ranch sauce, chicken, diced onions, and bacon. It's hard to go wrong with that combo.

Sadly, the shrimp rangoon pizza with shrimp, rangoon sauce, sweet chili sauce, and cilantro is on the menu, but not yet available. Ditto for Ali's nacho supreme pizza with beef or chicken, Ali's nacho sauce, red onions, tomatoes, black olives, and cajun crust. Those should be available soon.

The menu goes a lot deeper — Ali says he rolled out the shawarma fries with cheese and garlic-ranch sauce at the same time as the chicken 65, and it's been a hit. There are hot dogs, biryanis, wings, and actual burgers with names like "The Junkyard Dog." It all may be worth exploring, but you can't go wrong with the 65.