The war on drugs has failed Detroit 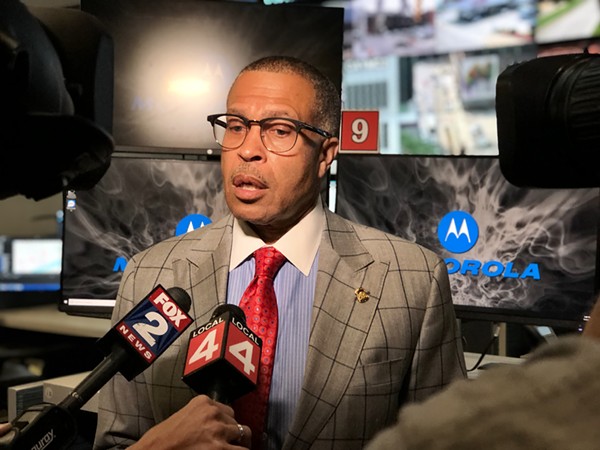 Last week we lost another battle in the war on drugs here in Detroit. City Council extended the city's option to not allow recreational marijuana sales until at least March 31. About the same time, Detroit Police Chief James Craig announced a crackdown on illegal marijuana sales. Functionally, it looks like this: we're not going to allow legal stores where it can be sold, and police are going to crack down on illegal sales because they're violent.

That's always been the squeeze on marijuana. Criminalize it, and fight the new criminals that have been created.

I'm not claiming that this is some plot between Council and the police, but I am claiming the outcome is bad. Chief Craig says that he noticed an uptick in homicides around illegal marijuana sales that started in early December. So what else happened in early December? Could it be that recreational sales started in Michigan — but not in Detroit? According to Craig, some people in Detroit — who can't go to a nearby store — are ordering marijuana through a delivery app. When the delivery person shows up with the stuff, they get robbed. Sometimes they get killed.

This opting out of the recreational system is worrisome. A number of other municipalities played the temporary moratorium game with medical marijuana and kept extending it. If this happens one more time in Detroit, it'll be clear that's the game here.

At best, Council is trying to fix a situation it helped create. City government has kept its head in the sand on marijuana throughout voters' push to legalize. After voters legalized medical marijuana in 2008, there was no visible effort to set up a system. As a couple hundred dispensaries cropped up across the city, anti-marijuana citizens organized against them. In 2016, the state finally came up with laws governing provisioning centers, but Detroit followed with its own stringent zoning regulations in 2017. Dispensaries backed a petition drive that loosened up those regulations in the November election that year. But then those proposals got overturned in court in 2018.

Looks like we're up for something similar now, but Council is tweaking it a bit. Last time around, the city just wasn't enthusiastic about there being marijuana stores in town — period. Now, it seems their problem is that the wrong people have them. That was an undertone back when the city was first addressing provisioning centers in 2016, but it was stated explicitly in last week's press release from Councilman James Tate announcing an extension of the opt0out:

"It's clear that Detroit's medical marijuana industry is [overwhelmingly] owned and operated by individuals who don't live in the city and take their dollars back to their communities," he said. "It's critical that we take the necessary time now to ensure that [Detroit's] impending recreational marijuana industry will properly reflect the demographic of the city it's located in."

Chief Craig says that he noticed an uptick in homicides around illegal marijuana sales that started in early December. Could it be because recreational sales started in Michigan — but not in Detroit?

That doesn't give them a pass for this past year, when they knew that social equity was a part of the recreational law, regardless of what they were waiting for Lansing to do. Social equity is about helping communities hardest hit by the drug war to prosper in the new industry.

Council members have to fix a lot of things around that issue because they've ignored it for so long. One issue is that none of the 50 current medical marijuana locations are a designated as part of the social-equity program, and the state is only licensing current locations for recreational sales.

Here's what Ypsilanti did about social-equity concerns in the law passed there last fall: There are currently seven provisioning centers in that city. Their opt-in law extended the number of licenses available to 10. Since the Marijuana Regulatory Agency won't be taking retail store applications from new entities until November, Ypsilanti is holding the extra three licenses until next January.

"The social-equity program the state has rolled out is good," says Ypsilanti City Council member Annie Somerville. "What they didn't factor in is what municipalities are going to do with caps and buffer zones. Under the medical ordinance, we had very strict buffer zones. It would have been difficult adding facilities. Setting aside those three social-equity permits for a year will be the most important piece."

That brings up another of Detroit City Council's issues. The Detroit ordinance calls for a buffer zone of 1,000 feet between a marijuana facility and any school, park, church, liquor store, day care center, or other marijuana facility. Then there are some other restrictions regarding business and industrial districts (where grows must be located). Generally, anywhere that people go on a regular basis was ruled out. If Detroit were to add more retail locations, as well as grows, micro businesses, processors, designated consumption establishments, etc., zoning has to evolve.

It was difficult enough for provisioning center owners to find acceptable properties that met the buffer-zone requirements. How can these other businesses be accommodated? Or will they be?

It makes sense to add more retail locations — unless the city wants to entertain lawsuits from any number of directions. There are the people who'll think they didn't get their social equity, or the people who believe that social equity blocked their chances. And none of this accounts for the folks who just don't want to see marijuana anywhere.

If Detroit chooses to add more retail licenses, how many do they have to add before the industry "will properly reflect the demographic of the city it's located in?" That would be a lot if Council truly wants to create that reflection.

This whole thing is a long way from over. It's going to get racial. It's going to court. And, in the meantime, nobody is going to be buying and selling legal recreational marijuana in Detroit.