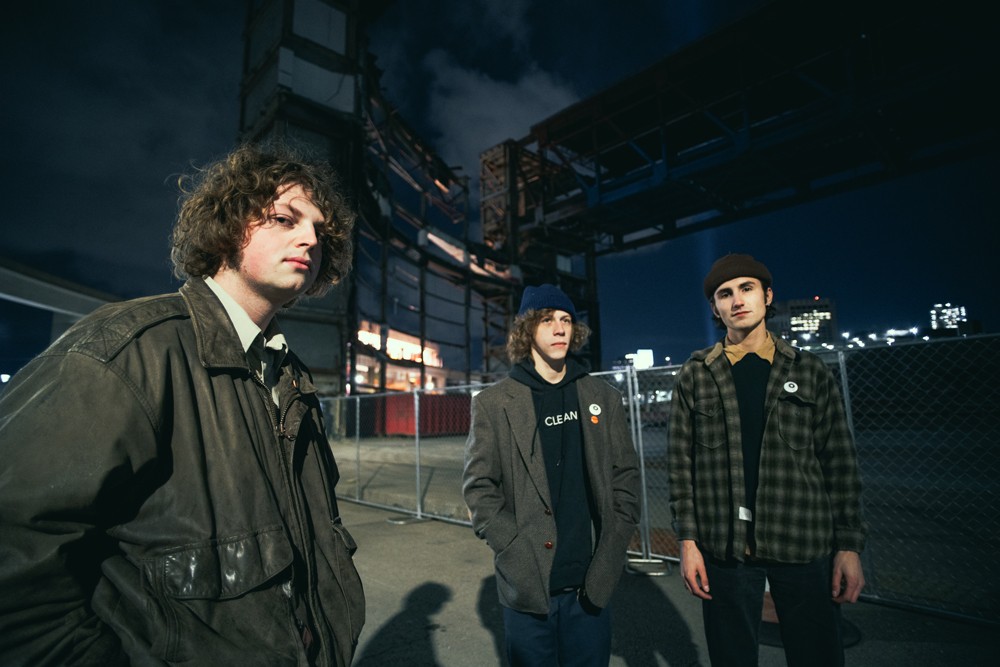 Things have moved quickly for garage rock band the Stools — but that's how the band likes to do things.

"I think it was on the eve of my 20th birthday and I was kind of, like, having a manic episode," frontman Will Lorenz says. He called his friend Charles Stahl. "I was like, we have to start a band tonight. We have no choice."

With Lorenz on guitar and Stahl on drums, the two started recording that first day directly to tape using a boombox. Stahl had never played the drums before, but they already had the name the Stools picked out, based on a doodle Stahl sketched in a high-school psychology class a few years earlier (which they settled on because it could sound like "an '80s punk thing or like a British invasion band, depending on what mood we're in," Lorenz says). The next month, the band even booked its first show at a house party. All they needed was a bassist.

Krystian Quint had been playing in local bands, including Blaire Alise & the Bombshells. Though he was reluctant to join another garage band — "I was, like, kind of over it," he says — he agreed to play the show because one of his other bands was already also playing that night.

The Stools played for just eight minutes — because that was how many songs they knew. "One of our friends sparked a joint right before we started," Quint says. "By the time we had finished, broken down, and walked off stage, he was still smoking it and passed it to me."

"Some people were still waiting in line for the bathroom," Lorenz says.

The band says nobody would book them for "like, six months" after the show, but that was just as well — it gave them time to slow down, at least a little bit. A friend who worked at the School of Rock in Farmington offered to record the band pro bono; that became the band's first EP, 30mg Blues. When they finished the band's first full-length, Q-Nails, they promoted it by spray-painting "The Stools" on bedsheets and hanging them around town.

Though the young band couldn't even tie their shoes during Detroit's heyday as a hub of garage-rock revival, led by bands like the White Stripes around the turn of the century (Lorenz and Stahl are 22, while Quint is 23), they discovered those bands and their influences later in life through a mix of cool elders and digital algorithms. A friend's uncle turned Lorenz onto Detroit garage-rock bands like the White Stripes, the Hentchmen, and the Dirtbombs, as well as older punk acts like Black Flag. Meanwhile, Quint says his mind was blown one day when his Pandora radio station started playing the Oblivians.

"I was just like, what the fuck is this?" he says. "At the time, I was, like, into the Black Keys. This sounded like the Black Keys were literally having their organs ripped out. I was like, this is the most amazing thing ever." The friends also bonded over more recent acts rock like Ty Segall, Thee Oh Sees, Jay Reatard, and Burger Records bands.

The bandmates, all from Grosse Pointe, have since become connoisseurs of lo-fi. "We're huge nerds for garage rock," Lorenz says. "At this point, we can say, 'That band's definitely a Memphis band, that band's a Detroit band, that's a New York band, that's a Japanese band.'" At one point during our interview, the band breaks into an argument about Detroit cassette tape labels. When Stahl and Quint start talking about their shared love of skateboarding, Lorenz jokes, "It sounds like they're speaking French to me."

The band says they were drawn to punk and garage rock for the same reason kids in every generation since the late 1960s have. "We heard that Ty Segall made his own tapes, and that Jay Reatard started making music on like, pots and pans," Quint says. "We were like, well, we can fucking do that. It's the same as the punk bands back in the day — they heard the Ramones playing three chords and they said, 'I can do that, too.'" And these days, the distance between a band and its output is even smaller, thanks to the directness of digital platforms like Bandcamp.

The band's garage-rock geekdom has paid off. Last year, they caught the eye of Jack White's label Third Man Records, who put out a 7-inch record. In July, the label invited the band to open for White's band the Raconteurs at the Masonic Temple. This year, the band plans on releasing a live cassette, and is working on writing a new record. There are no solid plans for a follow-up yet — for a change, the band seems to be really taking its time.