Smith & Co. is one of Detroit’s best new restaurants 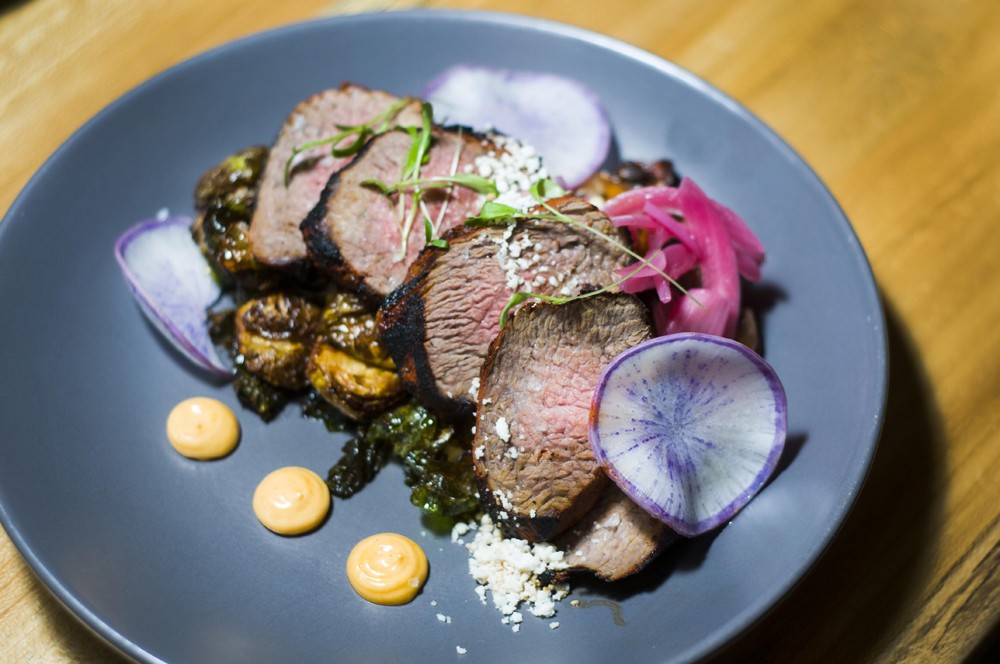 In almost every dish I tried, the flavors at Smith & Co. (pronounced "and coe," not "and company") made my mouth happy. Each dish has a lot going on, but not to the point of distraction. Chef Greg Antioho educated himself by deliberately taking jobs in different types of kitchens, including Indian and Vietnamese, so that he could "find the common links between all of them." (For example, he uses white soy sauce in an empanada instead of salt.)

As is becoming a mini-trend, the owners of Smith & Co. adopted the name that was already on the building — think Gold Cash Gold and Magnet (Radiator Works). The sign that says Smith Welding Supply Co. is not the original — that one did not include merry wine bottles — but the tiled floor in the entranceway dates back nearly 100 years.

If "welding supply" conjures up notions of a gloomy factory interior lit by the occasional welding spark, discard that — Smith & Co. is bright, with pretty wooden tables and lots of windows overlooking a patio. Food is served on non-matching pottery plates. Nearby at 666 Selden is its partner, the Nain Rouge Brewery, which is expected to be in operation and supplying the restaurant no later than spring.

Of 10 dishes I tried at Smith & Co., only one was just OK, and another one mixed. The rest were all stellar, with big flavors ranging from sweet to pickled, often in the same dish. Portion sizes are not stingy. Wait times can be lengthy. Don't get me wrong about "just OK" — the empanadas that are one of six small plates were perfectly fine — a single rather than a home run. They're appropriately flaky and made with pleasantly spicy Corridor Sausage chorizo, with both salsa verde and mojo de ajo. An even better appetizer was mushroom toast, a big crisp piece of sourdough with fried garlic, both oysters and creminis, and ricotta to smooth it all out. And in the stratosphere was pork belly, its fat crisped to perfection. On the side was a smear of sweet-potato fennel purée and a bit of taro, and the dressing was yuzu-cilantro.

In the salad category, I could not get enough of the plum salad, though roasted pears had been substituted the night I asked for it, no complaints here. The base is arugula, with rye croutons, a mild sheep's cheese, smoked black pepper, pickled onions, and miso-candied walnuts. There was just enough sweetness, and the vinaigrette was sparingly applied. The beet salad used greens, dried oyster mushrooms, goat cheese, Marcona almonds, pickled fennel, and orange slices, with a blood-orange vinaigrette. Although you couldn't always pick out each ingredient individually, the result was a well-considered whole.

Smith & Co. has a burger, as well as a corned-beef and a fried-chicken sandwich, each with lots of enhancements similar to the above — the burger alone sports seven additional elements. For entrées, Antioho does fried chicken again, this time in a bowl with rice, mushrooms, kimchi, and chili paste (kochujang); steak frites; and a pan-seared chicken breast. But I wanted to see what he does with carne asada. The answer is the opposite of the thin and chewy Mexicantown version. The chuck is as tender as it's possible to be and still be real meat. It's served with aioli, some slices of avocado, a little corn salsa, and some whole marble potatoes that have been subjected to a confit treatment, then smashed to expose more surface area and make a great crusty skin.

Rainbow trout is accompanied by some exceptional maitake mushrooms, just-right asparagus, and potatoes that you might call "scalloped" but are actually potato pavé, a far more complicated recipe that leaves the spuds utterly butter-drenched. Best of all was shrimp and grits, with pork belly, smoky cheddar grits, mild cheese, and tomato jam. The shrimp had just the right elasticity, the snap when you bite, and the rest of the dish — well, just read the ingredients.

Antioho thoughtfully offers separate menus for the gluten-sensitive and for vegetarians or vegans. The vegetarians, for example, get a papas bravas bowl similar to the carne asada bowl — in fact, that dish was designed first and the protein added later.

Dessert brought the only near miss of the evening: a tough doughnut. It was covered with chocolate ganache, however, with coffee pot de crème and housemade vanilla ice cream on the side, which we all managed to find room for despite the generosity of the earlier courses. You can go simpler for dessert, with a Faygo or Vernor's float, or explore new worlds with a honey corn cake that includes olive oil, fennel seed, feta, lavender, and ancho sorbet.

I didn't try the short but interesting cocktail list, which includes a drink that mixes tequila with mezcal and a "Detroit Manhattan" with Faygo Rock & Rye. The Malbec I had one night was smooth and round, the best red wine I've had in a restaurant in awhile, and a Néboa Albariño white from Spain was zingy. One night a peanut butter beer (not from Nain Rouge) was on special; though I'm not sure what it would pair well with, our party liked the novelty. When Nain Rouge opens, only its beers will be served at Smith & Co. and in the brewery taproom; general manager Dave Mammel says he'll be brewing for everyone, not just himself.

There's also a "Sober" drinks list, with low-sugar amaro sodas from Detroit-based Casamara Club, "so you can drink when you're not drinking," as the makers say.