The Satanic Temple to MT: We're not atheists 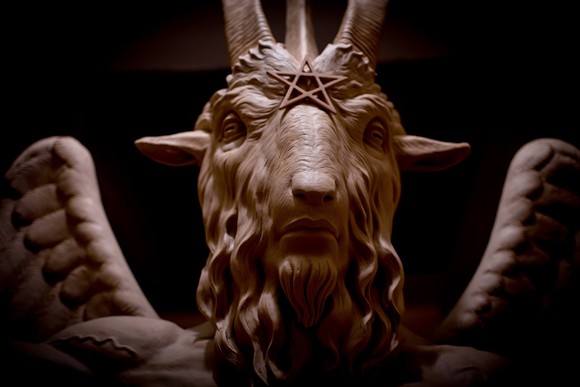 Courtesy photo.
We're on the phone with the Satanic Temple's Jex Blackmore to learn more about the Baphomet monument that the group is expected to unveil in Detroit later this month, and in our typical way of signing off we ask if there's anything else she'd like to add.

"Yeah," Blackmore says. "I have a little bone to pick with you."

It turns out Blackmore takes issue with our previous description of the Satanic Temple as an "atheist activist group."

"We consider ourselves non-theistic Satanists," she says. "And a religious organization — that's a really important distinction that we make. For example, Hindus are sometimes called non-theists. And you wouldn't call political Hindus activists, or atheist activists."

We concede that it's a fair point.

Blackmore adds: "If it's helpful: Atheists don't consider themselves part of a religion. Non-theists have a religion, but without God. That's the difference."

Here's the copy from the "About us" section from the TST's website:

The Satanic Temple is a non-theistic religious organization dedicated to Satanic practice and the promotion of Satanic rights. We understand the Satanic figure as a symbol of man’s inherent nature, representative of the eternal rebel, enlightened inquiry and personal freedom rather than a supernatural deity or being. It is our mission to facilitate communication and mobilization of politically aware Satanists, secularists, and advocates for individual liberty. We actively provide outreach and participate in public affairs where the issues might benefit from rational, Satanic insights.

The Detroit Chapter is officially affiliated with the national Satanic Temple organization, we are a self-organized, volunteer-led group that seeks to organize and empower like-minded individuals who are passionate about supporting The Satanic Temple’s mission. We promote awareness of the Satanic cause, educate our peers and encourage critical thinking, activism and justice within the Detroit community.


In other news, the Oklahoma Supreme Court recently decided that the Ten Commandments monument is unconstitutional and must be removed from the Oklahoma Capitol grounds. The Baphomet statue was originally intended to be placed next to that monument. Where the Baphomet statue is headed next has yet to be decided.