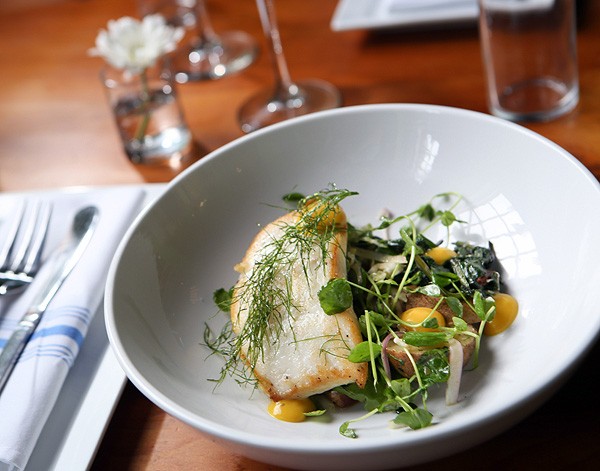 Reservations! What a concept. And bread while you wait too. Are owner Sandy Levine and chef Doug Hewitt stuck somewhere back a decade ago, before "wait 1.5 hours at the bar" and "starve before your order arrives" became the only hip options?

Their retrograde policies are highly welcomed by this reviewer, especially as the bread is accompanied by silky and pungent ramp butter, less assertive than garlic.

That compound butter is just one of many dare-I-say loving touches implemented by Hewitt and delivered by some of the friendliest yet professional servers anywhere. The Chartreuse mission statement says it seeks employees who are "positive, happy, and fun to be around" — unlike bosses who want the negative, the depressed, and the pain in the ass? But I have to say, they've succeeded in hiring charmers.

Chartreuse (the final sound is a "z") is not just the color of the restaurant's walls and many of its furnishings. It's a family of liqueurs made by Carthusian monks in France, using a centuries-old recipe of 130 herbs, flowers, and other plants known only to them. (Your friendly server will tell you all about it.) Hewitt serves 11 varieties of Chartreuse, and on one night not long after opening, free samples were being offered of the basic green (anise flavored) and the basic yellow (sweeter, somewhat honeyish). They're $6 now, and prices escalate up to $100 for a shot from a sweet 1940s bottle.

The two Chartreuses Levine calls "entry level" are the basis of the lovely green "Last Word" cocktail, which also includes lime and gin, and the "Improved Gimlet," which my companion pronounced "well-blended."

Myself, I liked the "Part and Parcel," with gin, grapefruit, St. Germain, and lime.

The cocktails and Chartreuse-tasting are fun but nearly pale beside the excellence of the small plates and entrees Hewitt concocts. Prices are quite reasonable too, with each plate a decent quantity. The competition is fierce today for in-the-city locations with top-notch food and drinks, but I can hardly think of a more sure-thing bet than Chartreuse. And you'll be able to get in.

Let's see if I can do justice to the flavor combinations: In a cold appetizer, a thick chunk of smoked salmon has a bit of a crust and is served with grilled cornbread, a hot-sweet pepper jelly and chevre that's become sauce-like. The fish alone would have been a revelation, but the accouterments are all more-is-more. A twice-cooked egg is first poached, then rolled in panko, then deep-fried (don't try this at home). It's served warm with tiny roasted Brussels sprouts and a shallot vinaigrette atop frisee — not my favorite green, because of its mouth-feel, but more than acceptable here.

Vichyssoise (the final "s" is pronounced) is a definitive chartreuse color, not really a soup — too thick. What increases its fabulousness is the addition of succulent marinated trout. In the three weeks between my visits it was replaced by an also wonderful though less colorful soup: roasted cauliflower, made tart with the same vegetable pickled, and more of that trout.

A spring vegetable Caesar eschewed romaine for crisp asparagus, bok choy and peas, for a crunchy effect, and exchanged Parmesan for a generous shredding of Locatelli, a brand of pecorino.

The larger dishes were equally wonderful, though note, they are not sized to produce leftovers. Four smoky spare ribs are blackened and finished with a soy mirin glaze. Their side of "raw potato seaweed salad" turned out to be paper-thin slices, marinated to tenderness in a sesame-ginger vinaigrette. A plush cap steak was served with whole ramps, mellowed by grilling. Scallops (way low-priced at $13) were highlighted by a mango sauce, though the menu said grapefruit. Duck confit, just $15, was as rich as it should be, with a side of barley "risotto" and grilled mushrooms.

My taste buds never got a rest with anything bland or pedestrian.

A vegetarian friend, scarfing a vegetable sampler from Recovery Park Farms in Detroit, said, "A plateful of tasty treats. This is a radish? Holy cow!"

For dessert we tried a honeyish, crisp-edged grilled pound cake with rhubarb-blueberry compote and a vanilla-bean pudding that, despite its humble name, would put any creme brulee to shame.

One of the more fun things about Chartreuse is the lovely vertical garden growing on one wall, an array of succulents that are watered by an internal system. The multiple hues of the display expand on the theme of green.

Validated two-hour parking can be had in the Park-Shelton garage next door.