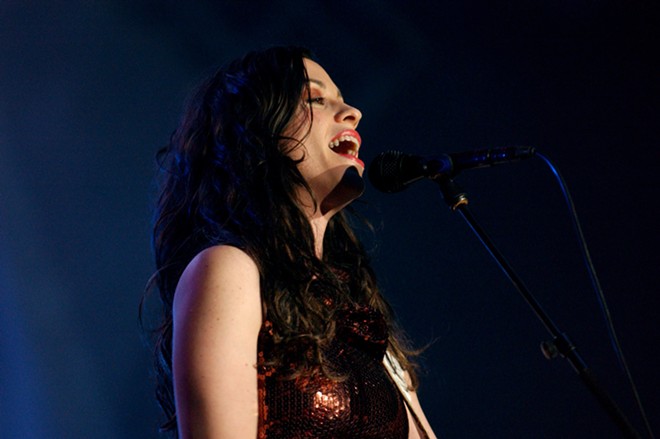 Our sweater is on backwards and inside out and holy shit Alanis Morissette is touring Jagged Little Pill in its entirety.

The summer of 1995 was the summer of Morissette — the Canadian-born pop star-turned-rockstar who rose from Canada's Star Search to formidable tour de femme force with her international debut, Jagged Little Pill, which went on to sell nearly a half a million records in the first hour of its release, and 30 million to date. She was the first female out of Canada to land a No. 1 album in the U.S. At the time of its release, Morissette was just 20 years old.

The record, which launched “You Oughta Know” — the searing anti-love revenge anthem that may or may not be about Michigander and Full House star Dave Coulier — burst into the mainstream radio ether, along with a slew of hits including “Hand in My Pocket,” “You Learn,” and the unironically unironic song, written in just 15 minutes alongside producer Glen Ballard, “Ironic” — a song which Morissette says led to “the entire planet shaming” the singer for her misuse of the word.

The 31-date trek will span June and July of next year, including her first metro Detroit performance since 2008, on July 21 at DTE Energy Music Theatre. For each date, Morissette will perform her seminal record in its entirety, as well as music from records like 2008's Supposed Former Infatuation Junkie, 2002's Under Rug Swept, and her last entry, Havoc and Bright Lights from 2012. Joining Morissette for the Clarkston performance are fellow '90s rock babes Liz Phair and the Shirley Manson-fronted Garbage.

The tour announcement also coincides with both the release of Morissette's new Avril Lavigne-sounding track “Reasons I Drink” from her forthcoming record Such Pretty Forks in the Road (May 1) and the Thursday premiere of Morissette's Broadway musical Jagged Little Pill, which was written by Acadamy Award-winning filmmaker Diablo Cody (Juno) and directed by Tony Award-winner Diane Paulus (Pippin). Morissette told The New York Times in a recent profile that the Broadway show is in no way a jukebox musical. Instead, the story is told through the songs from the record, which parallel with the struggles of a modern family dealing with issues like race, addiction, and consent.