Meet the people helping preserve Detroit’s native dances, the Funk and the Jit 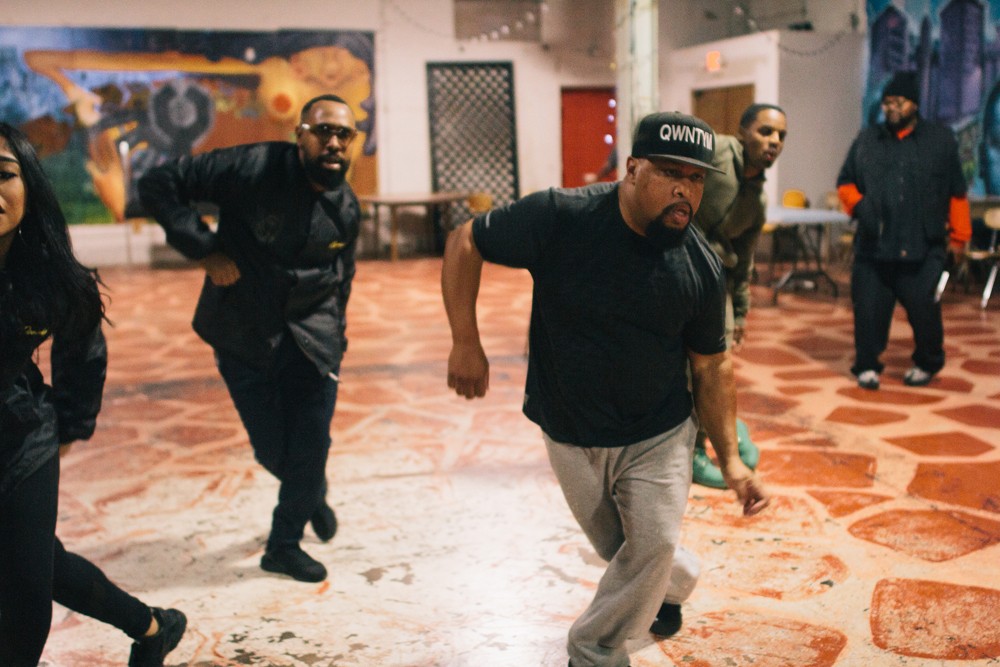 Derek Dandridge
"This ain't ballet. This is a street dance — so it touches everybody." Ron Ford keeps native Detroit dances alive as QWNTYM.

If you passed a group of teens dancing on the corner of the street today, they'd likely be copying the moves of their favorite social media star. And if we're being honest, they'd be more likely to be inside, huddled around a tiny screen tuned in to TikTok or YouTube. Today's dances come from the internet, and like most of the internet's memes, most internet dances have been plucked from their original context, then twisted through multiple pop culture references and trimmed to a bite-sized video or gif that's easy to share. Although the original song may follow the accompanying dance through the vortex of the worldwide web, it's nearly impossible these days to trace the true origins of one dance. In 2019, every dance is everybody's — the Whoa, the Floss, and the Shoot prove it.

But back in the day, Detroiters weren't just copying moves that made their way to the city — they were coming up with something completely new. And that's how native dances like the Jit and the Funk were born.

"Everybody in Detroit tries to do other styles of dance, but nobody tries to do the Detroit Jit everywhere else," says James Broxton, a member of local dance company House of Jit. "So it's important that we spread the culture."

If you've never seen the Jit, it kind of looks like someone trying to get gum unstuck from the bottom of their shoe. The Jit is rigid, smooth, loose, rough, and beckoning. Jit dancers look like they've built an invisible rectangle around themselves and confine their moves to it. They fill that self-controlled space with every move they've got to give, especially in competitive settings. Yes, there's a frenzy to the dance, but it reveals itself as an urgency the closer you get to the movement. Even if you've never Jitted before, there's something familiar and satisfying about witnessing it.

On a rainy Halloween night, Manson, Broxton, and House of Jit dancer Lilanie (Lily) Karunanayake are practicing in a Cass Corridor building with dancer and choreographer Ronald Ford Jr. for his upcoming "Jit The Funk Up and Dance" event. Karunanayake recently joined House of Jit after graduating from college, and says seeing Manson perform on So You Think You Can Dance is what convinced her that she needed to be a part of it.

"I love the footwork, the energy, and the fast rhythm of it," she says.

As evidenced in the event name, Ford expertly melds moves from both the Jit and the Funk repertoire to create a throughline across their disparate histories. Ford is a Funkist who choreographs Funk routines and shares both Jit and Funk dances while introducing original music that he practices and performs to under the name QWNTYM. It's hard to tell which part of the dance world all the other dancers come from until they pause for a break or emerge in the middle for a solo. Some dancers are purists about their chosen art form, but Ford prefers to incorporate the many generations of talented people around him.

"I'm proud to be part of the Jit community as a Funkist and a person that appreciates and shares Jit," he says. "Jit is like the [Joe Louis] fist downtown ... it's a Detroit treasure."

People who have been dancing with Ford since he was a student at Southeastern High School — first as a member of Cosmic Breakers, then Cosmic Crew, and finally, the Unstoppables — are at tonight's rehearsal, too. When everyone returns from different corners of the room, they position themselves in the center, facing a collection of mirrors in the front of the room, then hit carefully memorized steps of the same routine — shaking off generational, cultural, and technical gaps at an insanely fast pace. As these bodies work to remember the same movement, something wholly new and comfortably reminiscent is left in its place.

"This ain't ballet," Ford says. "This is a street dance — so it touches everybody."

Ford's dancing community is vast, and he's good at bringing people together from all around the city, but there have been some mainstays throughout his creative journey. Juan Jones has been dancing with Ford for 35 years and will also join him as a dancer for Jit the Funk Up and Dance. Jones sticks to the old-school style, but appreciates the work that Ford is doing to preserve and push Detroit dance culture forward.

"Since we were 14, performing has been our go-to thing," Jones says. "Our dancing has evolved from our style to the style they got now, and we're still relevant so that makes me feel good. I feel like I'm not wasting my time just dancing."

A lot has changed since Ford started dancing. After learning his first routine from Derrick Billups and joining his first dance group, Cosmic Breakers, with Kedia "Kid" Richardson, he intuitively moved through Jit and into Funk. Ford credits the Madd Dancers for making Jit what it is today.

‘It’s like a family name, and everyone dies off and you start thinking, How can I carry on this family name? ... It’s not just fun, it’s not just a responsibility, it’s beyond that — it’s a necessity.’

But Funk is Ford's specialty — it's the thing he is working to preserve. Through his music and public performances with his dance group the Unstoppables, he's trailblazing a path for Funk to continue into the next decade. He was recognized for his work of preserving the Jit and Funkateer as a 2018 Kresge Artist Fellow.

"It's like a family name, and everyone dies off and you start thinking, How can I carry on this family name?" he says. "It becomes very important to you. It's not just fun, it's not just a responsibility, it's beyond that — it's a necessity."

According to Ford, Funk is more group- and competition-based than Jit, and it's faster and more fluid than its Funkateer-style predecessor. Where Jit is mostly legwork, Funk is half armwork and half legwork. Jit is typically performed to the same early techno and electro tracks that were popular when the style was coming into shape. Ford lists Cybotron's "Alleys of Your Mind" and Kraftwerk's "Numbers" as songs he danced to when he first got started. Funk is not as closely linked to one genre of music. As a musical artist, Ford works to make songs that he can perform the lyrics to without slowing his dancing down.

The Funk owes its name to the Funkateers, a dance group started in Inkster, Michigan, in the 1970s. The Jit owes its name to the Jitterbugs, a Detroit dance group comprised of the McGhee brothers that also started in the 1970s. The newer dances are linked to their rhythmic forefathers thanks to their prefixes, but every new member of each new dance crew or company chooses how closely they want to incorporate the foundational moves of a particular dance style. These two dance crews birthed a set of dance crazes that still define Detroit street dance culture today.

In archival video clips, Funkateers are seen from the historic Detroit dance show The Scene wearing matching three-piece suits or metallic hot pants and scandalous shiny scoop-neck tees. If they were miked up, they might be mistaken for a singing group. Fellow Kresge Award recipient Haleem "Stringz" Rasul made a documentary called Jitterbugs: Pioneers of the Jit detailing the Jitterbugs and their history of showmanship and performance.

When Ford tries to sit and explain the two different dances, his arms and legs start moving as he talks; eventually, he stands up to demonstrate. Jit and Funk are dances you do — not dances you sit down and talk about. The only way to pass them on and preserve their history is through teaching, learning, and practicing.

"This is where you belong — in this history, right here," Ford says. "It's still here and there's a future — the future is based on now."