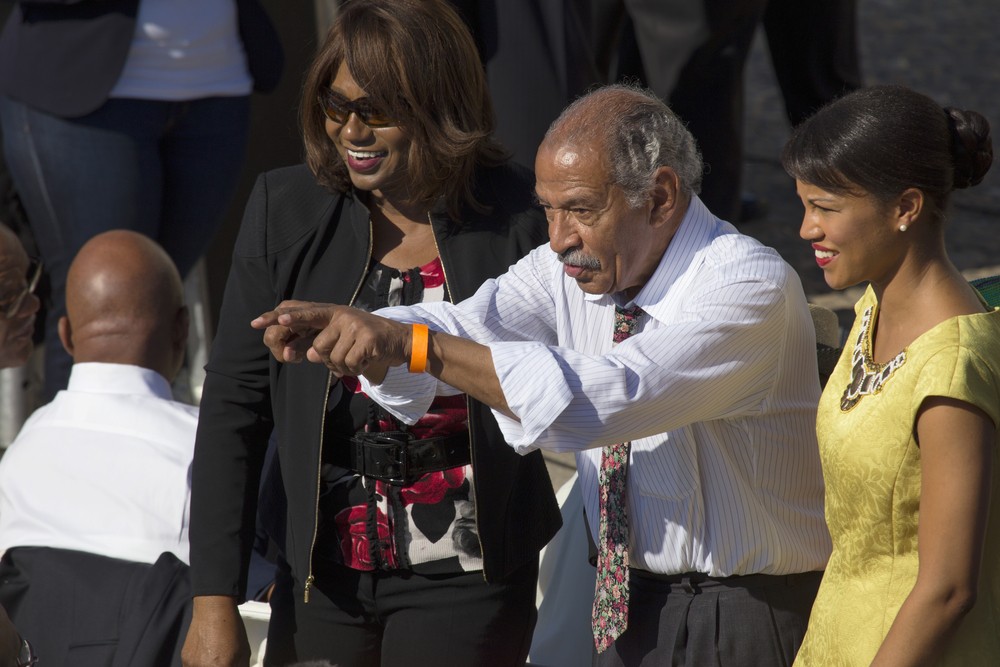 Joseph Sohm / Shutterstock.com
Michigan Congressman John Conyers at the 50th anniversary of the march on Washington and Martin Luther King’s “I Have a Dream” speech, Aug. 24, 2013.

The many great accomplishments of Rep. John Conyers Jr., who died on Oct 27, have been recalled in memorials these past few weeks. The list of Conyers' accomplishments is long, as is fitting for someone who lived to be 90 years and became a household name in local politics. But amid all that eulogizing and memorializing by politicians, entertainers, and religious leaders, it seems that no one remembered to mention his long struggle in support of ending marijuana prohibition.

For example, during last week's memorial, Mayor Mike Duggan mentioned that Conyers had sponsored the Medicare for All bill (the National Health Care Act). But, as has been typical throughout this process, Duggan didn't mention that Conyers co-sponsored Barney Frank's Ending Federal Marijuana Prohibition Act in 2011, or any of the many things the representative did in support of marijuana legalization.

Conyers was a warrior for human rights, which made him a warrior for cannabis legalization and ending the war on drugs with its enforcement bias against people of color, feeding the prison system and disenfranchising the rights and opportunities of anyone who gets caught up in the system.

"I don't think Conyers wanted people to use marijuana," says Brandy Zink, who met him years ago while lobbying Congress. Zink has worked on issues such as violence against women, gun violence, and medical marijuana campaigns over the years. "Social justice — that was the basis of his support for marijuana reform, because of the harms of the drug war."

If it was an outgrowth of Conyers' social justice beliefs, he took it seriously in the legislative process and voted accordingly.

In 2001, he co-sponsored the States' Rights to Medical Marijuana Act.

In 2003, he received an award from the Drug Policy Alliance for his tireless work toward drug policy reform at the group's biennial conference against the war on drugs. Conyers sat on the DPA board in support of repealing prohibition for more than a decade.

In 2008, he voted to allow rehabilitated drug convicts to get student loans.

He also questioned the Drug Enforcement Agency administrator regarding raids on facilities in medical marijuana states. "Please explain what role, if any, emerging scientific data plays in your decision-making process to conduct enforcement raids on individuals authorized to use or provide medical cannabis under state law," he wrote in a letter to DEA officials.

That same year, he took aim at the war on drugs in voting against funding for Mexico to fight drugs.

In 2009, he supported distribution of sterile syringes among drug users to reduce the incidence of hepatitis and AIDS.

In 2011, Conyers supported efforts to expunge the records of first-time drug offenders after they completed probation and joined in a DPA press conference calling for the decriminalization of marijuana.

In 2014, he received the highest possible ranking from NORML, indicating a pro-legalization stance.

Conyers' commitment to the issue was strong enough that, during his last few years in office, he brought lawyer and former DPA director of federal policy Dan Riffle onto his staff as a legislative aide. (Riffle currently works on staff for Rep. Alexandria Ocasio-Cortez.) This capped off a career commitment to fighting for social justice. Anyone truly engaged in these struggles soon comes to understand that one issue leads to another.

"The roots of Conyers' interest and conviction grow from his lifelong concern for civil liberties, and civil liberties goes along with civil rights concerns for police profiling and targeting of minorities — what I call the racist drug war," says Mike Whitty, a retired labor relations professor from the University of Detroit Mercy. Whitty has worked as a volunteer on Conyers' campaigns and is active around cannabis legalization issues.

"John Conyers was one of the earliest champions of prison reform," Whitty says. "He often hired people on his staff who had convictions, and he helped many people who got out of jail get established and on their feet. He was a big champion of prison reform way before it got mainstream during the last few years."

The war on drugs has so completely co-opted local leadership that, even as it falls apart around them, even as the devastation in the local community caused by the drug war is so apparent, it is a rare occasion for someone to break ranks about relaxing those laws and the anti-cannabis attitude.

Former Detroit City Council Member George Cushingberry tried to stand up and be a cannabis hero in the city. He got drummed off of council after one term because he openly and vociferously supported the brand-new industry when nobody else in city government wanted to talk about it — which is pretty much still the case.

Conyers is the figure who could talk that talk and still maintain his position in local politics. Maybe it was because he had been around forever, just like his father before him. More likely, Conyers' grounding in social justice issues and an underlying understanding of how the tools of oppression are interconnected led him to what is still a revolutionary position on the subject.