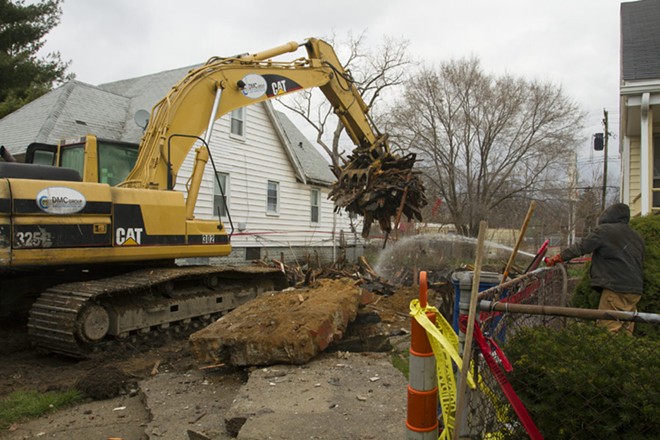 Remember last year when that photo went viral on Facebook, posted by someone who claimed their entire front porch was stolen from their Detroit home? It was too preposterous to be true, and indeed it was revealed to be a hoax.

Well, it looks like something even crazier actually happened.

According to The Detroit Free Press, a house near Brightmoor owned by Michigan State Rep. Sherry Gay-Dagnogo was demolished two weeks ago, and nobody knows who did it.

Gay-Dagnogo had been a vocal critic of Detroit's demolition program. The third-term state representative of Michigan’s 8th District recently questioned a proposed $250 million bond to tear down 16,000 homes across the city on her Facebook page, and says she had also voiced concerns over the lack of diversity in the demolition program.

She told the Freep:

"I've been vocal about the mayor and the quest for an additional $250 million," Gay-Dagnogo said. "And I have my concerns about the number of minority companies who have access to the program. But that was all based on what I've read and understanding what has happened to other people and just the dysfunction. But now? It further substantiates how I feel about the program and takes it to a whole new level."


The Detroit Building Authority, which oversees the demolitions, tells Metro Times they had not ordered it to be demolished. And the house was not slated for demolition on the city's Open Data Portal.

Adamo had previously been suspended for erroneously tearing down a wrong house last year — but the company maintains they didn't do it this time.

Gay-Dagnogo purchased the home last year for $1,000 through her nonprofit, Coalition to Integrate Technology and Education, with plans to rehab the property for a needy family. She had until Oct. 14 to bring it into compliance.

Gay-Dagnogo told the Freep she only learned the house had been torn down when her neighbor alerted her last week. The neighbor left her home for several hours and noticed Gay-Dagnogo's house was gone by the time she came back.