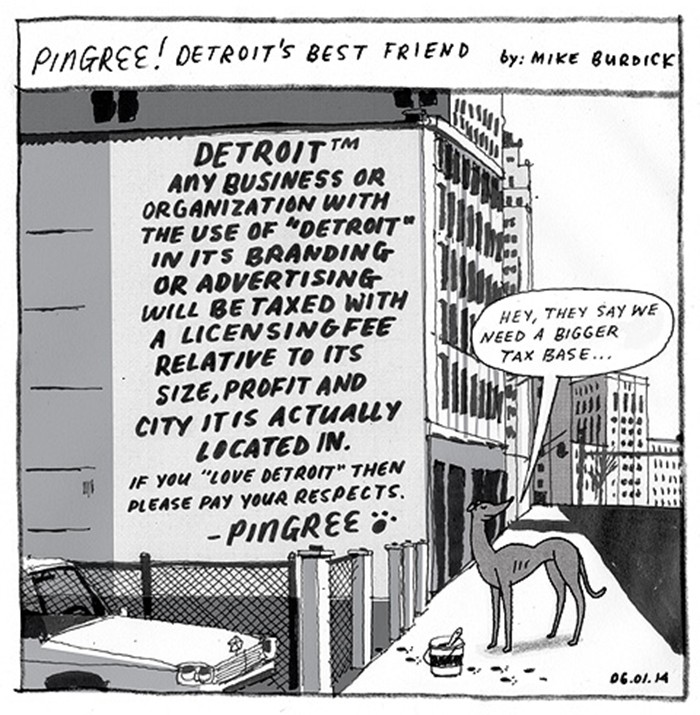 When he's not working as production manager at printmakers 1XRUN or working as a freelance designer, Michael Burdick writes and illustrates a comic strip about former Detroit Mayor Hazen S. Pingree reincarnated as a stray dog. With Pingree: Detroit's Best Friend, Burdick (full disclosure: a former classmate of ours) tackles a variety of issues — from using Detroit as a brand, to the water shut-offs, to the Red Wings arena deal. We called him up to learn more.

Metro Times: Where'd the idea for the comic originally come from? It's pretty weird!

Michael Burdick: It's weird, but it's simple. I don't have a dog, and I always wanted a dog again. I had a dog when I was a kid, but living in an apartment, it's hard to get one. I was dreaming about getting a dog and I really liked greyhounds. I liked Hazen S. Pingree, and I thought "Pingree" would be a good name for a dog. I'm not sure how having a dog and naming him after the former mayor lead to the idea of a comic about Hazen S. Pingree reincarnated as a stray dog in the present day city.

MT: It's an immediately funny image, having this little dog talk about these complex issues, even if you don't really know who Hazen S. Pingree was.

Burdick: It's funny because it's this mutt that has greyhound in it, and then Hazen S. Pingree was a rather, you know, large man — bald, pink. Someone pointed that out to me when I first started it: "It's pretty funny that he's reincarnated as this weird, little mutt dog."

MT: You have to be somewhat of a history buff to know who Pingree was. He's not one of the obvious mayors that come to mind.

Burdick: He was mayor in the 1890s. I only know of him because my old roommate was a big history buff, and he was into politics. He told me about Pingree and his potato patches during the recession. From what I understand, a lot of people were out of work, and he worked really hard to lower the cost of bread so it was more affordable. He made some gallant move to acquire vacant land and have the poor farm it as potato patches. He was trying to get money from the city, but they couldn't give anything, so he sold his favorite horse. That's when the American media started hearing Pingree's name. He's one of the top mayors in history, but he's a very obscure name, a very old guy. The only point of reference really is that statue in Grand Circus Park. He was considered the "people's mayor" — he was very much against corporate greed and he was very well known for exposing corruption, even in his own government. In the end, he was a four-term mayor, so he had a long legacy.

MT: So as a reincarnated dog, is Pingree helpless? Can people hear him?

Burdick: The joke is he's talking like a human, but there are no humans around. He's obviously speaking to an audience, so he feels like people are around. It's almost this alternative world — maybe there are no people there. The joke is he is a dog, but maybe he still thinks he's human. A lot of the end joke is he rushes off to go do something, as if he's going to the office, or he says he did this thing. It's almost this Don Quixote-type fantasy, like fighting the windmills. He thinks he's doing the right thing.

MT: Who's the audience for the comic?

Burdick: There's lots of jokes that maybe on a national level you wouldn't understand. It is a local focus — there's a lot of more obscure jokes. I like believing that the audience is smarter than what the media thinks they are. I don't mind if the joke is kind of lost on people. I guess I would hope that people look into it more. The issues are really complicated — some of them are national issues, like Michael Brown's death and everything that's going on in Ferguson.

A lot of it is local issues. It's just what I'm surrounded by. I live here, I do all of my business here. For me it's cathartic to talk about these things. It's fucking depressing, at times, man. I feel bad for Duggan! Some of these issues that I try to work out, as a fake mayor in a fake Detroit, are just really heavy sometimes. It's a nice escapism.

That's what I like about political comics and Jon Stewart and Stephen Colbert and stuff. Sometimes you can't fight them, so it's just good to laugh about them. It just raises awareness in a certain way. You could do it more seriously, but there's got to be a little humor just to swallow it better.

MT: Do you just release the comics on your Instagram?

Burdick: Yeah. That was just the audience I was thinking of — my friends. Eventually down the road I hope to have a website. I think I'll eventually make a book.

It's the only thing that I've consistently used a hashtag for. I like that because I hate hashtags! If you use these general words like "#art" or "#SundayComics," you're taking an image that's difficult to find in an ocean of photos, and you're just putting it into like, another sea. But if it's an organizational tool, I think that's when they're successful. The "#HazenSPingree" hashtag is really obscure — there's only like, 18 posts, and 12 of them are mine!

MT: Do you publish it regularly?

Burdick: My goal when I started was every two weeks. For the first month and a half I was very consistent. Part of it is laziness. I have freelance deadlines. Sometimes it's just too hard, or the joke just isn't there yet. I really believe in discipline, but I'm also hard on myself.

MT: We can sense a Calvin and Hobbes and Bill Watterson influence in the strip.

Burdick: I don't really want to hide that. That was a big inspiration for me as a kid, but as an adult, I started reading more about Bill Watterson. He never really sold out. He was very adamant about not capitalizing on the characters — I really respect that. I like that he refused to make toys. All the decals that you see of Calvin peeing, those are counterfeit. He knew newspapers wanted (his work), so he would fight for contracts that would get him bigger pages. He was very concerned about comics as an art. I think that's what makes Calvin and Hobbes such a long-lasting icon in the comics world. He's a much better illustrator than I, though!

MT: Maybe it's only a matter of time before someone will make counterfeit decals of Pingree peeing on things — at least that would make more sense.

Burdick: Exactly. I think I'll purposely do a comic that has that pose so people can do it. That would actually work, if Hazen was peeing on a Ford logo or something.

Read more Pingree on Instagram by following @michaeleugene. View a slideshow of five of our favorite strips here.