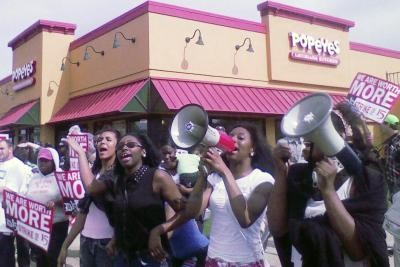 Courtesy photo
Protesters calling for a higher minimum wage
A bill introduced this week by the Michigan Legislature that would ban municipalities from enacting a Community Benefits Agreement (CBA) ordinance would also outlaw minimum wage increases at the local level.

Gov. Rick Snyder signed a bill earlier this year that will increase the state minimum wage to $9.25 per hour by 2018. But House Bill 5977 would prevent municipalities in Michigan from enacting their own specific minimum wage increases.

The bill would "prohibit local units from establishing any requirement related to employee wages or benefits, such as a minimum wage," according to an analysis from the nonpartisan House Fiscal Agency.

The bill would prohibit municipalities from establishing "any requirement related to employee wages, or benefits, such as a minimum wage, particular benefits, a specified amount of paid or unpaid leave time, or the payment of a prevailing wage except as provided by law," the analysis says.

Michigan would enter uncommon territory if the bill manages to make its way through the Legislature during this month's frenetic lame-duck session:

Plenty of cities across the nation have enacted specific minimum wage hikes at the local level: This week, Chicago passed an ordinance to raise the city's minimum wage to $13 per hour by 2019. Seattle approved a $15 per hour minimum wage in June.