Andrew Erdmann
The front of the Cole this Fall.
We have a great deal of monumental architecture in Detroit. In fact, sometimes we get so caught up describing the grandeur of the Fisher Building or of the Masonic Temple that we might forget all the little buildings whose life stories are concealed behind fastidious exteriors. Some of them have lived many lives, the way Victor Hugo once described architecture as something like a collective palimpsest, in which "each generation in passing inscribes its line … one sees here and there some dogma glimmering faintly through the new symbol overlying it."

In his remarkable 1994 book How Buildings Learn, Stewart Brand explored the ways buildings adapt to changing conditions, how new purposes overtake stolid old buildings, and how adaptable classic styles are. If we're to believe Brand, the real heroes of our city's architecture might not be those ostentatious showpieces so much as the persistent buildings that hulk along our surface streets, adapting to new purposes and telling a new story. Some might even have been considered ugly or embarrassing, useless or historically insignificant, but they hint at the innate elasticity of our older housing stock.

Take the structure at 2753 Park Ave. It bears an unusual story: a simple home that puffed itself up into a pretentious apartment building.


It has been standing there at least since the 1880s, when Park Avenue began to fill up early with modest frame houses. Even in 1890, about 17 residential listings appeared for the stretch of Park Avenue between Sproat and Bagg, and a few stores occupied the Sproat corner. The two-story frame house was a simple home, a series of stepped shotgun shacks, telescoping down to what was probably a kitchen in the rear. A two-story stable rested at the back of the property on the alley.

This humble home hosted a number of different tenants until 1898, when William E. Cole moved in. A person of some means (he could afford a telephone in 1898), Cole lived at this address for 14 years, though little information is available about how he earned his living. One year, he was listed as being the secretary and treasurer of the Carpenter Chemical Co., an impressive title, if nothing else. But Cole died on Jan. 2, 1912, age 41, leaving his widow, Mrs. Mae Cole, to live on at the address.

This stretch of Park Avenue was growing slowly, and by the time Cole died; there was already a meat shop, grocer, a shoemaker and a couple dozen residential listings. Mae Cole did what many widowed wives did at the time: She took on boarders. By 1914, she had a number of boarders living with her in the house. 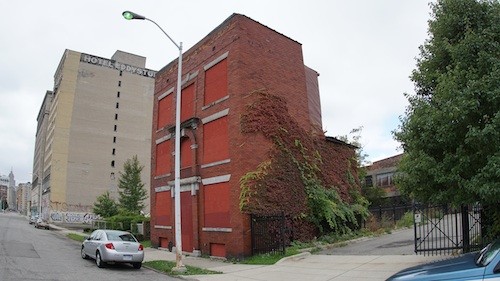 Andrew Erdmann
The house behind the building can be easily seen now that the home's old neighbors are gone.
But a remarkable transformation occurred over the next few years. Somehow, Mrs. Cole converted her dwelling into a set of flats. A 1919 map shows that a three-story front section has been added onto the building. In 1921, “The Cole” is listed as having eight different residents, including a toolmaker, a salesman and a clerk.

Indeed, Mrs. Cole was keeping up with the tenor of the neighborhood. Toward the end of the teens, the neighborhood was changing to one of flats, not dwellings. The proud front that went up on the Cole must have blended in with the other imposing structures rising on Park Avenue. Of course, the building was still the simple frame home it always was just behind the three-story brick face it gave to the street, but with other buildings leaning in close, the necessary illusion made Mrs. Cole the proprietor of a bona fide apartment building.

Despite the shallowness of the building’s façade, one must concede a grudging respect for the resourceful woman who saw that it would bring in tenants and money. Indeed, in the coming years, this stretch of Park Avenue would meet its eventual destiny as a fashionable street with hotels and apartments. At its height, the corner of Park and Sproat, just six doors down, would host three hotels, each more than 10 stories tall.

Two of those buildings are still visible: The Hotel Eddystone and what was once the Park Avenue Hotel. In many ways, the intersection of Park and Sproat is one of the most depressing corners in the whole city. Here stand two completely abandoned hotels, both more than a dozen stories tall.

Andrew Erdmann
Though some of the Cole has been lopped off, its secret identity can be seen from the rear.
But not everything about this block’s destiny is cruel. Just up the street, the Cole still stands, and the vagaries of fate have played a startling practical joke on it. Every one of the imposing residential buildings have given way, with the exception of the Cole.

There it stands, its pretentious frontage now towering above the street when faced head on. But from any other angle on the street, the building is like a woman with her dress blown up by the wind. Without the fashionable two-and three-story buildings that used to flank it, one sees how the front of the building is the scarcest concession to the dignity of those who would stay there. Until quite recently, the clapboard outlines of the house were exposed, looking much as they must have in the 1880s, a series of smaller structures telescoping down toward the rear of the lot. It would seem that the most recent owners had the decency to amputate the final and smallest one-story section in the rear, but the building presents quite an amusing show to those curious enough to peer behind that grand false front old widow Cole put up more than a century ago.