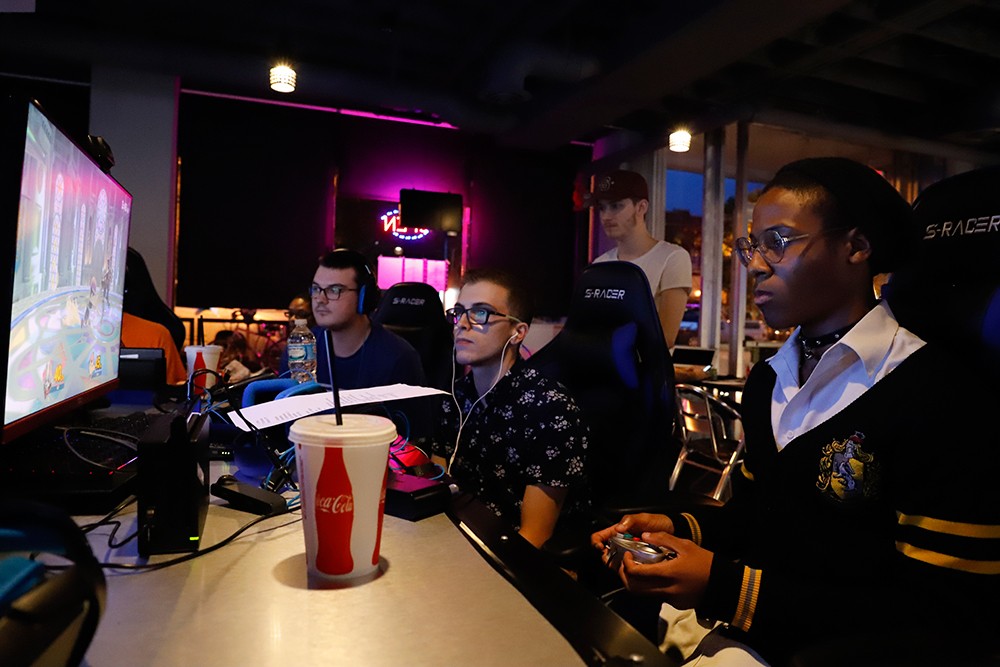 The phenomenon of "esports," or the burgeoning industry of professional video gaming, has grown in popularity. According to market research firm Newzoo, esports generated $900 million in revenue last year, and by 2021 that figure is expected to exceed $1.5 billion. So it should perhaps come as no surprise that just as there are sports bars, metro Detroit now hosts a number of video game lounges. Here are some of our favorites.

As Royal Oak's first-ever esports-orientated restaurant, LFG — short for lounge, food, and games — bills itself as a place where patrons can host tournaments, stream live esports games, and come together with other gamers.

"The concept behind the lounge is an extension of playing video games in your parents' basement," says Nicholas Stramaglia, the owner of LFG. "Not everyone has a large area where they can invite friends over to hang out, or the money to put into a new game system or computer. I provide that location — a place where people can come, to use those things, without having to pay the large overhead. They can also have food served to them — without the burden of having to clean up afterward."

The restaurant lounge, which opened earlier this year, has 10 computer set-ups with common games installed and two couch console set-ups, with 60-inch TVs connected to Xbox, PlayStation, and Nintendo consoles.

Stramaglia says he plans to build a community of gamers who want to socialize with other players. Possible events will include trivia nights, streaming events, and tournament viewing parties, similar to sports bar Super Bowl watch parties.

If you aren't into gaming systems, the lounge allows guests to bring in other games, such as cards and board games. LFG also serves up food, including salads, subs, wraps, pizzas, and burgers. LFG's playing fee is $8 per hour, per system. For example, if you have four people playing Mario Kart, that's $8 per hour. But, if you have four people on four separate computers, that's $8 per hour per person.LFG is home to Neutral Ground Detroit's weekly tournament, which takes place on Mondays from 6 p.m. until close and is open to the public. There's a $5 entry fee and a $10 tournament fee, which goes into the winners pot.

Ready Player One is a basement arcade bar, serving beer and cocktails with a side of your favorite childhood arcade games. Almost everything on the menu is only $4, and happy hour is from 5 p.m. to 7 p.m. Monday through Friday. The bar has nine pinball machines, 30 arcade games, and a Nintendo 64 console for Mario Kart.

POP is a classic arcade with a full bar and pizzeria. It has 34 arcade and pinball games, and is a community workspace for those who love electronic gaming.

High Score is an 1,800-square-foot social gaming venue where you can compete against other players or chill during an open play session. Non-alcoholic beverages are available for purchase but guests can also bring their own food or beverages (adult versions are welcomed).

At Exferimentation, you can enjoy a beer like an adult and play games like a kid. There's no fee to play the collection of classic games, as long as you order a beer or food.

Punch Bowl is stocked with a collective of music, food, games, and beverages. Here, you can play an arcade game, bowl, sing karaoke with your friends, or host a private event. Happy hour is from 3 p.m. to 6 p.m. Monday through Friday.

i>So many restaurants, so little time. Sign up for our weekly food newsletter delivered every Friday morning for the latest Detroit dining news.