The Wurlitzer Building is still crumbling; court orders owner to make $100k in repairs so water line can be fixed 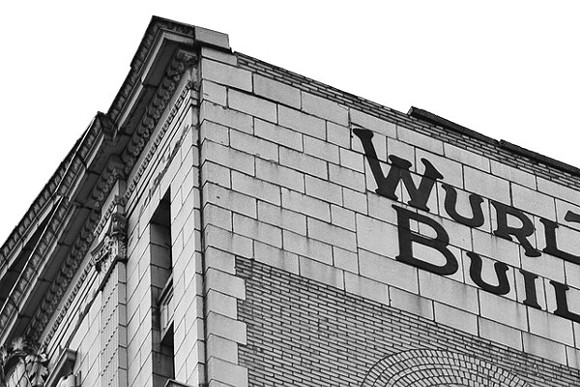 Travis R. Wright
In 2011, a piece of the cornice from atop the Wurlitzer Building at 1509 Broadway in Detroit recently fell 12 stories, crashing through the roof of the neighboring building, 1515 Broadway.
The owners of the crumbling Wurlitzer Building have to spend $100,000 to make the structure safe for workers to repair a water main break, Detroit's top lawyer announced today in light of reports highlighting a jerry-rigged hydrant that has for weeks provided water to adjacent businesses.

Detroit hasn't repaired a broken water line that serves 1515 Broadway and Simmons & Clark Jewelers in downtown because the Wurtlizer poses a potential threat to workers, according to a report in Motor City Muckraker.

Workers cobbled together a setup by running plastic hose held up by duct tape from the hydrant to provide water to those businesses, Muckraker reported.

But the city has made efforts to resolve the issue, says Detroit Corporation Counsel, Melvin "Butch" Hollowell.

In a statement, Hollowell says the city recently filed a nuisance abatement lawsuit in Wayne County Circuit Court against Paul Curtis, the owner of the Wurlitzer, "because falling bricks from the structure are a danger to the life and safety of the public." The city recently took similar action against the owners of the nearby former AAA of Michigan Building and the Park Avenue Building.

The court ordered Curtis to remediate the building in order to fix the water main that supplies buildings to properties like 1515 Broadway and Simmons & Clark. Following the order, the court granted immediate relief to the city, and required Curtis to place $100,000 in an escrow account "to strip the loose brick from the building to make it safe for workers to repair the water main break," Hollowell says.

Remediation work is currently underway, Hollowell adds, and should be wrapped up in two weeks. Once completed, the Detroit Water & Sewerage Department will repair the water main and restore what Hollowell politely calls "proper service" to businesses along Broadway Avenue.

Metro Times has previously covered the Wurlitzer's neglect and issues the building has posed nearby businesses.