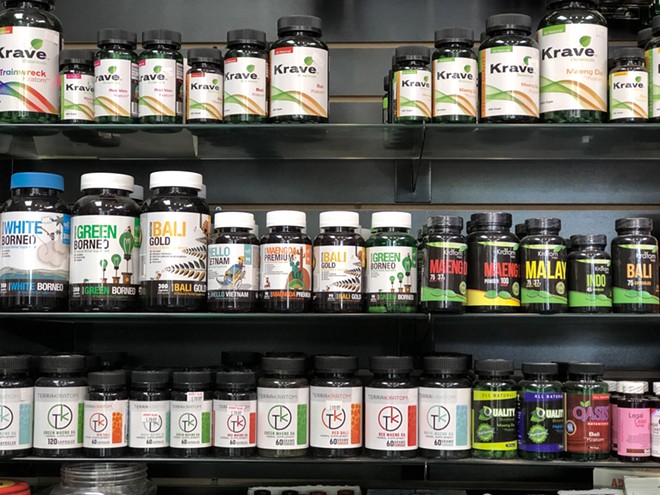 Steve Neavling
Kratrom at Detroit Smoke and Vape in Midtown.

A Republican state senator wants to require kratom users to obtain a prescription from a doctor to use the increasingly popular herbal supplement in Michigan.

Sen. John Bizon, a medical doctor, introduced a bill last week that would regulate kratom, which is available online and at gas stations and head shops.

“The currently unregulated drug kratom is both dangerous and addictive,” Bizon, of Battle Creek, said in a news release. “There has been an alarming increase recently in the number of deaths from this relatively unknown drug. We must take measures to help prevent such tragedies and the continued abuse of this drug.”

In April, the CDC reported 91 fatal overdoses involving kratom over an 18-month period. But in most of the deaths, other drugs were present, making it difficult to determine kratom's role, if any, in the overdoses, the CDC acknowledged.

"Clearly, if kratom is adulterated with substances like fentanyl, heroin, benzodiazepines, cocaine, and other prescription opioids as set forth in the CDC report, adulteration can lead to overdose deaths," the American Kratom Association wrote in response. Last year, the FDA announced a recall of some kratom products linked to a Salmonella outbreak that sickened 199 people in 41 states. In Michigan, the FDA documented four cases.

Proponents of kratom say the herbal supplement curbs opioid addition; relieves pain, depression, and anxiety; and elevates mood and concentration. Early-stage research and anecdotal evidence from kratom advocates suggest the herbal drug is an effective alternative to opioids, which killed nearly 47,000 people nationwide and 2,033 in Michigan 2017, according to the U.S. Centers for Disease Control and Prevention. But health officials warn that kratom, which is unregulated, can be dangerous and addictive. The U.S. Food and Drug Administration has taken a zero-tolerance approach, advising the public to avoid consuming kratom.

Six states have banned kratom. In 2014, Michigan lawmakers introduced a bill in the state House to ban the herb, but the legislation eventually died.

The U.S. Drug Enforcement Administration planned to ban kratom in late 2016 but backed off in response to backlash from physicians, scientists, and members of Congress.

Now, Michigan is among at least nine states considering regulating the substance under the "Kratom Consumer Protection Act," which would require companies to test the product and list the ingredients and directions on the label. The act has been approved in Utah, Nevada, Georgia, and Arizona.

In November, the act was introduced to the Michigan Senate, where it's awaiting a hearing in the Committee on Agriculture. Michigan is one of a dozen states being lobbied by the American Kratom Association.

Violating these requirements would be a misdemeanor punishable by up to 90 days in jail. The bill would also ban sales to people younger than 18.

If passed, the Michigan Department of Agriculture and Rural Development would oversee and enforce the regulations.