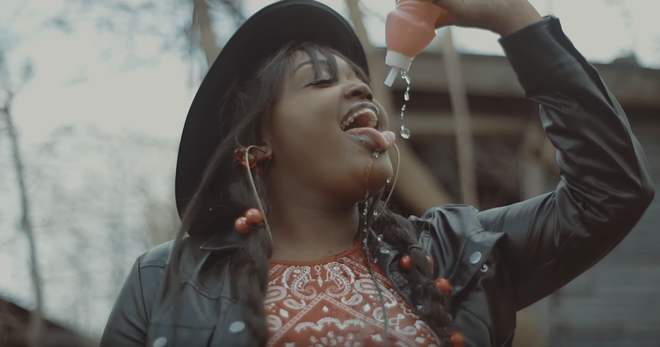 She sucks, she ducks, she's sex-positive, dick-loving Chicago emcee CupcakKe — and she's bringing her microphone deep-throating to her fans, aka “Slurpers,” along with some cash.

Anyway, CupcakKe took to Twitter to announce the details for her upcoming $10K Tour, during which the “Old Town Hoe” claims she will be giving away $10,000.

While it was not made explicitly clear in her tweet, the folks over at Stereogum used their noggins to deduce that CupcakKe is probably not making it rain $10,000 each night; rather, the site said she'll probably give out that amount over the course of her 21-date run, which includes a stop in Detroit at the Shelter on Sept. 8.

So, the math breaks down to $476.19 per performance which is still pretty cool and very on-brand, as CupcakKe has been known to be hella charitable — giving back to Twitter followers who are struggling (notably, an LGBTQ youth who was kicked out by his family) as well as to the homeless shelter she once lived in.

Tickets are $25 and are on sale at ticketmaster.com.

Get our top picks for the best events in Detroit every Thursday morning. Sign up for our events newsletter.
© 2023 Detroit Metro Times