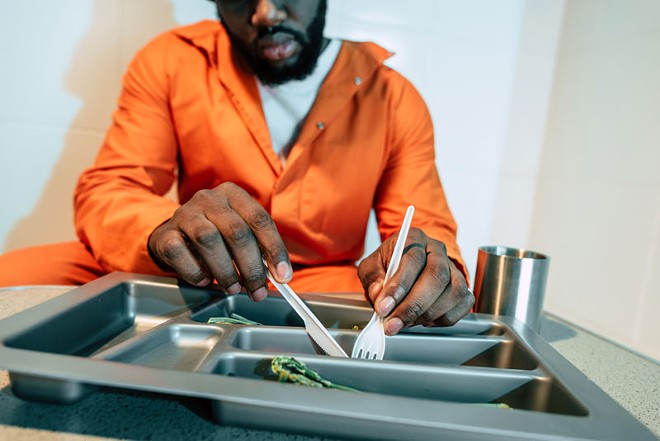 Michigan’s experiment with privatized food service came to its overdue conclusion this year when the Michigan Department of Corrections ended its contract with food service giant Trinity and rehired union staff to run the kitchen.

Some of the most dramatic issues that threatened inmates’ health and safety under Trinity and Aramark, which served the prisons through 2016, seem to have been resolved.

The days of prison staff putting out hits on inmates; regular maggot incidents; staff pulling discarded food out of a trash can and serving it; mold infestations; staff feeding inmates cakes on which rats had nibbled; staff selling drugs to inmates; staff having sex with inmates; and staff serving rotten chicken tacos resulting in 250 inmates being sickened and quarantined are largely over.

However, the Free Press didn’t talk to anyone who is incarcerated and actually eats the food.

Lamont Heard is an inmate at Lakewood Correctional Facility who has been in regular contact with Metro Times about the food issues in recent years, and successfully sued the MDOC in federal court for shorting inmates on calories during Ramadan. He detailed some of the issues that remain in the prison kitchens.

Though the state ended its contract with Trinity, it still serves Trinity food through October, and former Trinity employees are now employed by the state. Among the persistent problems are food that's rotten or of such low quality that it's inedible, and small portions that may not meet the calorie count required by law. Inmates in recent months have been served "fish that was orange on the inside" and other discolored foods.

"The problem for me is the administration still doesn't control the food. Trinity still supplies the food and controls the menu. Prisoners still cook all the food and it's always overcooked," Heard says. "Rice looks like oatmeal because it's overcooked. Seasoning is still not allowed. Icing on a biscuit is called a 'pastry item.' 'Mystery meat' that is misidentified as 'breakfast sausage' or 'salisbury patty' are still served, and the former Trinity staff are now MDOC employees. The fruits are either rotten or unripe, such as the apples and bananas."

Fruit flies remain an issue, and the kitchen temperature is often so high that the cooks are profusely sweating, Heard says. Sanitation issues have improved slightly, but the kitchen is often still dirty.

Many of the inmates are afraid to complain for fear of retribution, Heard says, but he passed along a statement from an inmate who wished to remain anonymous.

It notes that, prior to privatization, prisons grew their own food and provided meals with adequate nutrition, and the prison kitchens were sanitary.


"In response to the latest reporting on the MDOC food service standards and practices as distinguished from the private to the state run operations. This reporting is very deceptive when you compare the issuing, preparing and quality of the food 20 years ago. Since those times there has been a constant decline in the quality preparation and service of the food. For instance, the MDOC has substituted the once high-quality organic foods to a present day low grade of processed foods that lacks the essential nutrients needed for a healthy diet meal.

"There is also the issue of this low-grade food being continuously overcooked or undercooked [without] any regard to the consequences to possible health issues that could arise. There is a common practice to save freeze and reserved foods stored for up to weeks at a time, all in an attempt to save a dollar. Here at Lakeland Corr. Fac. we experience shortages of fresh cooked foods on a regular basis to justify reserving foods frozen for weeks at a time. This was unheard of 20 years ago. MDOC used to be self sufficient with its own farmers and slaughterhouses. A midnight shift that prepared the food and certified cooks. Enough food was prepared to cover shortages.

"Now the game is to prepare enough food that can also be used for storage for the next week meal. Thus the result is half old food mixed with newly cooked food. I think those who are in authority in Lansing and have investigated this matter [for] years knows what's going on because it is easy to see if ones eyes are truly open and you have been around."


So many restaurants, so little time. Find out the latest Detroit dining news with our weekly food newsletter delivered every Friday morning.
© 2022 Detroit Metro Times