By Steve Neavling and Lee DeVito

A suspicious fire on Monday gutted the former Gold Dollar, a small bar that once packed in crowds with drag shows and live music in Detroit’s Cass Corridor.

Arson investigators will be searching for clues Tuesday.

“There are a lot of video cameras in that area,” Deputy Fire Commissioner Dave Fornell tells Metro Times. “They will be canvassing the area.”

The building was fully engulfed when firefighters arrived around 8 p.m.

The long-abandoned building was purchased by Cass Revival LLC in 2017, which lists its address at the Ilitch-owned Fox Theatre. The squat building between Charlotte and Peterboro streets is three blocks from Little Caesars Arena and is part of an area the Ilitch family has promised to revive but never did.

As usual, the Ilitch’s Olympia Entertainment declined to comment. We asked if the building was in fact owned by Olympia, if Olympia did anything to secure it, and what the plan for the building was.
The Gold Dollar opened in the 1930s. From 1956 to the late 1980s, it was a popular drag show attraction. In 1996, the bar began booking live music under new ownership.

The Gold Dollar is where the White Stripes played their first show in August 1997. They were among dozens of bands to play on the small, elevated stage.

Doug Coombe
Jack White performing with the Go at The Gold Dollar in 1999.

“The Gold Dollar has become a rite of passage for every aspiring band that comes through Detroit,” Amy Anselm of the band Blush told Metro Times in 2001 when the bar closed. “It is such a shame it is closing its doors.”

The bar has been vacant since, joining the fate of the other buildings on the 3100 block of Cass Avenue.

In the past few years, half of the block was bulldozed and remains vacant, despite pledges from the Ilitch family to revive the area with apartments, retail stores, and restaurants.

As the fire raged on Monday, comments on social media nodded to rumors that the White Stripes’ Jack White hoped to buy the building. These are untrue, says Ben Blackwell, White’s nephew and a co-owner of White's independent label Third Man Records.

Blackwell says the building was dilapidated with “no floor, roof was shot, barely even had four walls.”

“Frankly it should’ve been torn down a long time ago,” Blackwell tells Metro Times.

But Blackwell says the memories of the storied club will live on. Third Man has released records of White performing at the venue in various bands.

“History like what happened at that club, for me, transcends the buildings it happened in,” he says. “I’m sure there were probably at least five other fires in Detroit today that were far more tragic. Life goes on, this too shall pass, memories are all that matter.”

As recently as 2016, the vacant bar was owned by Cass Revival LLC, which used the Ilitch’s Fox Theatre as its address. pic.twitter.com/fYLvMoZ8Y0 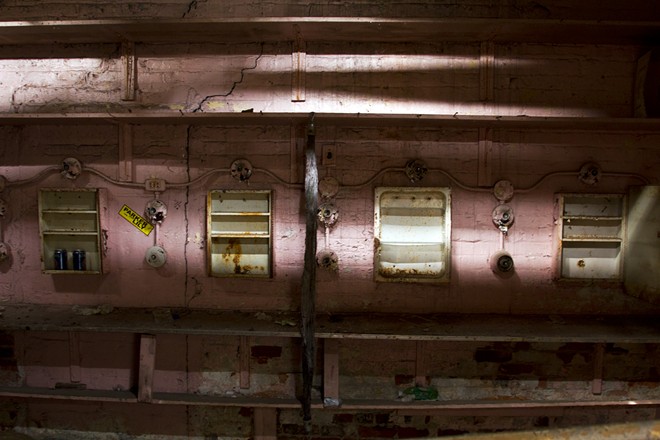 Steve Neavling
The pink "green room" where entertainers got ready.

Steve Neavling
The bar used to have drag shows.