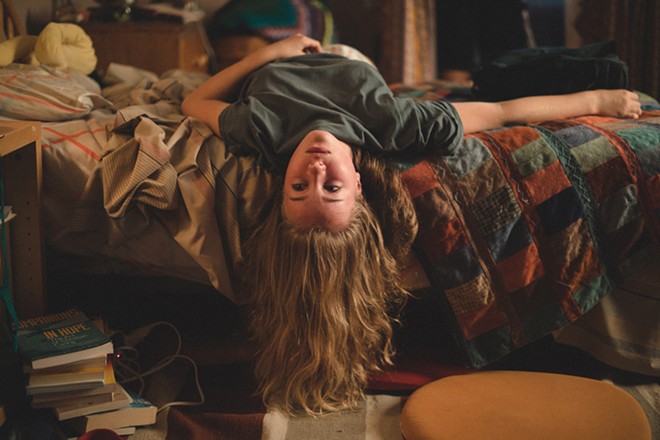 
After studying film production at the University of Michigan a few years ago, Meredith Finch was dismayed by a trend she noticed in her courses: the vast majority of the filmmakers she studied were men.

"I kept all my syllabuses from college and I can look back and see that there wasn't really an advocate saying, like, 'There are so many other movies we can be watching besides, like, Francis Ford Coppola,' you know?" she says.

As Finch would learn, there are plenty of women behind the scenes in cinema — they just needed a spotlight. After graduating, she got a gig working for Sundance Film Festival in Utah, which led her on a career of working with other film fests. Eventually, Finch got an idea to combine her two passions — independent film and event planning — to make her own film festival that would highlight women.

"Last year as I was riding the bus to one of my film festival jobs, I realized I could do this," Finch says. "I've really been set up in a position where I'm surrounded by people who have been doing this alongside me. So I really felt empowered to try this out myself."

Finch says her initial idea was to not just stop at women directors — she wanted to showcase films that had at least 50 percent crew that identified as women in key leadership positions.

"So much of the conversation is about 'directors, directors, directors,' but so many more people go into making a movie than and just the director," she explains. "And it was at that time I thought, you know, this could be my kind of platform to elevate the producers, the editors, the cinematographers, and the screenwriters who are so often overlooked."

To start, Finch created a call for entries on filmfreeway.com in mid-January. At the same time, she also reached out directly to filmmakers she knew.

The results, she says, far surpassed her expectations.

"I honestly had no idea what to expect," she says. "I'd asked like 10 of my friends back in December if they would be available to help watch stuff. And I remember telling them there might be like five or six that each of you have to watch. And then of course we got hundreds of submissions ... I was completely blown away by the number of submissions that we got."

Finch says they received submissions from six out of the seven continents (Antarctica filmmakers, step up!), spanning just about every genre imaginable.

In all, the final festival program features 26 films, with 17 shorts and nine features. Highlights include a number of regional premieres, including Canadian filmmaker Genevieve Dulude-De Celles A Colony (Une Colonie); Kate Nash: Underestimate the Girl, Amy Goldstein's documentary about the indie rock icon; and Elizabeth Sankey's Romantic Comedy, a critical analysis of the oft-maligned romcom.

Beyond Finch's initial guidelines to feature films with mostly women crews, she says 50 percent of the directors featured in the fest's program are people of color, and 19 percent identify as LGBTQ.

"The diversity of films is unbelievable," she says. "I mean, you know, we have films in languages I had never heard of before. We have films from young women, we had films made by teenagers that were sent in from Vietnam. The diversity of films and filmmakers just proves that there are so many people out there making movies, and they just aren't really given the platform because of this kind of whole cycle of who gets what opportunities."

Finch says it's important to highlight women filmmakers because it will encourage more women to seek out careers in filmmaking.

"When you don't see yourself doing the thing that you want to be doing, it's kind of ingrained that, oh, maybe this isn't for me," she says. "Like, why would I want to be a cinematographer if I couldn't name a single female filmmaker?"

"If [men] are all that you see, then it's kind of like, oh yeah, men are directors or editors or cinematographers," she says. "It's just kind of the standard, and it's when you don't see yourself reflected as a woman or as a non-binary person or an LGBT person or as a person of color."

Finch says she hopes the festival can help expose women currently working in the industry to get more work.

"I think that what sets women apart so often is that we know that we all have to have each other's backs," she says. "I've produced some stuff before, and it has always been at the forefront of my mind to hire women because I'm like, I got here because another woman helped me out and I want to give the opportunity to other women. I think there's a lot of that involved in recognizing the power — in kind of lifting each other up and giving other women opportunities and hiring other women."