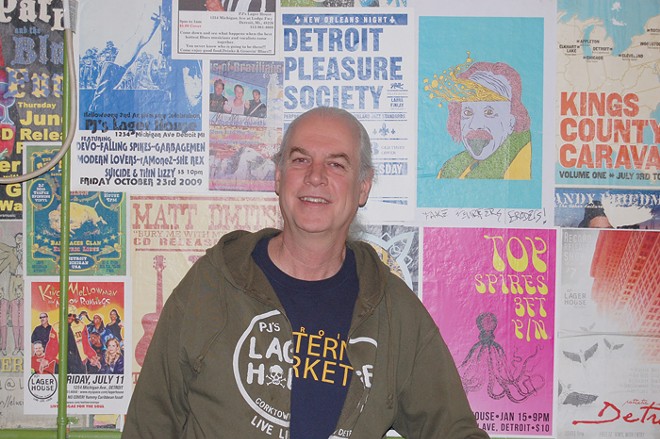 PJ's Lager House — the longstanding Corktown rock 'n' roll bar owned by former record store owner PJ Ryder since 2007 when he purchased it for $350,000 — has been listed for sale for the cool price of $2.2 million.

The real estate listing went up last week, but when asked when exactly he decided to sell, Ryder tells us "last night" — one of several factually dubious claims he makes during a recent phone interview about the move.

When pressed on why he's potentially walking away from the business, Ryder says it's due to a confluence of factors. He says it's partially because of his age: He's 65, and he says he'd like to be able to travel more. He also cites Corktown's changing character.

"I think that the nature of Corktown has changed dramatically, mostly for the better," he says.

When Ryder first bought the Lager House, which had by then already been operating as a rock 'n' roll dive bar, the old Tiger Stadium was still standing nearby, though abandoned. Since the Tigers' move to Comerica Park, Corktown lost its center of gravity as a bar neighborhood, only to regain it as a renaissance of hip eateries which have opened within the past decade along Michigan Avenue. And with Ford buying the nearby Michigan Central Station, even more changes are expected for the neighborhood.

"I will chide you, and I'll chide Melody Baetens, who I just got off the phone with, and everybody else," Ryder says. "I've gotten more publicity in the last 24 hours about PJ's than I've gotten in 12 years. You guys don't write about us that often. Once in a while we get a little mention."

On that point, we push back a little. We have written about Ryder, and regularly feature events at the Lager House in our coverage. Ryder believes MT used to be the source for art and culture in Detroit, but lost that when we got rid of event listings. While it is true that we at one point stopped doing listings, Ryder seemed surprised to learn that we had brought them back. Indeed, I hired a listings editor in 2017, and MT now features pages of comprehensive listings each week. Anyway, I digress...

In realty, PJ's Lager House faced financial difficulty from the beginning. In 2009, Ryder was famously the subject of a CNN Money story, "How to lose money fast: Open a business." That was a solid decade ago.

Ryder says he has never taken a paycheck in 12 years, discounting a brief period during the early days where he paid himself — but he says he eventually put all that money back into the bar to keep it running.

"After working for 12 years without a paycheck, I don't think anybody that I know of would continue operating, especially if I think there's a chance of selling the place," Ryder says.

PJ's Lager House enjoyed a reign as a hotspot during the post-White Stripes garage-punk days of the early 2000s, which is admittedly when I spent most of my time there. For a stretch between the mid-2000s and the early 2010s, I was either at the Lager House or the Magic Stick almost every week. I recall a circa 2010 Ty Segall show being so well-attended that Ryder erected a carnival-like tent in the lot next door to accommodate a larger crowd.

However, that center of gravity too seems to have shifted.

Ryder says artists who play packed houses elsewhere come to PJ's Lager House to play to only a handful of people. And in recent years, newer, similarly sized venues that cater to the rock 'n' roll crowd have opened around town, such as El Club, UFO Factory, and Deluxx Fluxx — though Ryder says he believes those newcomers don't compete with PJ's Lager House.

"I don't think it's the addition of new venues, because for the most part, most of the venues that are out there are not even doing [something] similar to what we do," he says.

Lat year, Ryder took to Facebook to blame his money woes on giving free drink tickets for touring bands — which probably didn't garner a ton of goodwill in the local rock community.

"The interest in live music — especially live music that you don't know, that's not your friend's band, that's not a band you've heard of because they're on the radio or because of some publicity they've gotten — people just don't come out," he says. "We have great, great musicians in this town, and they come and play PJ's all the time, and we have great people that are coming to PJ's. But that doesn't mean anybody comes out to see them."

"I think the crowd is still there," he says. "But you have Netflix and everything else streaming. You can get whatever music you want in the world on your Spotify, sitting in your car, sitting in your house. There's no need to go out and see live music. You have your internet connection that make it so that you can connect with everybody online and you don't have to talk to them. Nobody likes to talk to anybody anymore, and bars are places where people go to talk to each other. And we've reached the point where people don't care about talking to people anymore."

Well, shit. Someone please turn this episode of Black Mirror off. It's depressing.

Of the $2.2 million asking price, Ryder admits it's a lot of money, but explains where he's coming from. Other buildings in the area have sold for $1 million, and the Lager House, in operation since 1914, is not just a building, but a brand. Ryder says he's selling a bar with kitchen, all of the necessary licenses to operate, and all of the work he has put into the building, including two upstairs Airbnbs — though Detroit City council is trying to put the kibosh on Airbnbs, so those could be in peril.

"The Airbnbs kept PJ's alive a few years," Ryder says. "PJ's would have failed three years ago if I didn't have Airbnbs." Ryder says he would much rather have Airbnbs than apartments upstairs; he believes one of his previous apartment tenants was responsible for a 2014 fire that severely damaged the building. He also says that he had to completely rebuild the apartments "from scratch" three times because tenants had left them so trashed, which seems pretty insane.

In the meantime, PJ's Lager House is still operating as normal for the foreseeable future. There are shows booked through the end of the year. Ryder says he won a grant to restore the venue's facade, which he says he will move forward on regardless. If the building doesn't sell, Ryder says he will consider refinancing and moving forward.

But Ryder says he believes a buyer is out there, because Detroit is "very hot right now."

"I've never really made any money on the place, but I have a building that I have made into a much better building, and so now I'm willing to cash in on that," he says. "Whether it'll sell or not, I don't know. But we'll at least give it a shot. You know, I'd be a fool if I didn't."

Get our top picks for the best events in Detroit every Thursday morning. Sign up for our events newsletter.
© 2022 Detroit Metro Times