The symbolic power of the marijuana leaf

Images of marijuana leaves are on just about anything these days. They're on T-shirts, hats, cigarette lighters, underwear, posters — you name it, and somebody somewhere has slapped a marijuana leaf on it. The leaf has entered the realm of iconography that goes well beyond marijuana culture. And plenty of folks are getting busy with it.

The marijuana leaf is one of those universal symbols that goes everywhere that people go. Cannabis enthusiasts have made it recognized pretty much everywhere in the world. That green leaf with serrated edges and seven leaflets fanned out like a hand with its fingers open reaching toward the sky is a worldwide icon.

"You can recognize the marijuana leaf wherever you go the same way you recognize the Coca-Cola can," says Christeen Landino, a retired designer in the automotive industry. "No matter what language it's written in, you know it's Coca-Cola."

The cannabis leaf implies so much more than the simplicity of its visual presentation. It represents getting high. It represents rebellion against authority. It establishes cannabis friendliness. The simple leaf implies nature and safety and somehow seems like it could be part of the environmental green future. The ecology movement also uses leaves in its imagery. Leaves are cool. The leaf can also raise the hackles of those who are not cannabis-friendly.

"It depends on the person looking at it," says Landino. "The leaf is much more powerful than the bud in the fact that more people recognize the leaf. People within the marijuana community recognize the bud. The leaf is powerful; it's powerful in both ways that when some people see it they get all spastic over it, and others are like 'gimme, gimme.' It catches your eye."

The leaf is not even the most crucial part of the plant. Buds are the main source of cannabinoids that get you high or soothe your ills. The bud has its own place in the imagery firmament. A place mat at a recent reception for The Grow Off featured nothing but images of buds. Several print magazines, most notably High Times, have made marijuana buds central to their presentation.

The flowers can be so enticing in their emerald glory, shimmering with cannabinoid crystals. They can be fascinating and otherworldly, but they are an insider thrill. Their intricacy doesn't lend itself to the bold image that can make a design sing. Artists or scientists can appreciate the architecture of a mature bud, but they mean little as a symbol to nonusers. That's the leaf. 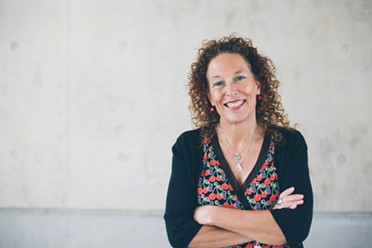 The leaf works well in marketing to easily let the public know what you're about without all the goofiness and outright stereotyping that can be attached to marijuana imagery. Roberta King, founder of Canna Communication in Grand Rapids, recently posted a blog about "Marijuana memes and messages in social media." She discusses businesses passing by the "stoner image" when presenting themselves to the public. She used the example of a stoned SpongeBob SquarePants comic that's been making the rounds which was wrong in so many ways, including copyright infringement and advertising to children. But the leaf — that's just fine. 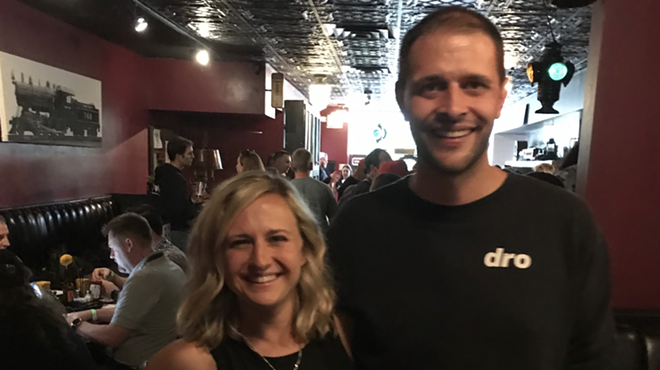 "I don't think it's appropriate in the business of trying to present an image and to be taken seriously," says King of the stoner stereotype. "I think using a leaf is a good thing. We've overused that emerald green color quite a bit. I advise to lean away from that. Versions of the leaf and a sort of nod to the leaf — it's the sort of an icon that speaks to exactly what it is. I think that's a good symbol. It's powerful and it's iconic. People are not going to confuse it with an oak leaf or a maple leaf."

That whole emerald green thing became a point of contention in Detroit a few years back. Before the city or the state were bothering to regulate provisioning centers, numerous of these storefronts were decorated with green Christmas tree type lights so that customers would recognize them as provisioning centers. However, this "marijuana green" drove the anti-marijuana crowd crazy. One rule that was pushed by the shut-em-down group was that storefronts should "fit in" with the existing decor of the neighborhood — and hopefully not with green. It was amazing how just the color green set folks off.

Despite its color, the leaf could be a good reminder to the public of where marijuana came from in the first place. More and more, the marijuana products people use just don't look like plant materials. Creams, salves, oils, isolates, shatter, wax, and gummies look pretty much like the same kinds of products you could pick up at a local strip mall. It's not a bunch of leaves and sticks and seeds in a baggie.

Going forward we'll see less and less of the actual marijuana plant, but we're going to see that leaf image everywhere. I have an ugly sweater, the kind people wear on TV shows around Christmas that were supposedly knitted by grandma, bedecked with marijuana leaves. Mine was a Christmas present from my brother-in-law, who doesn't use the stuff, but he's not all stiff about the subject.

Could it be that the marijuana leaf will be the ambassador that reaches across the divide of users and non-users? Will a leaf cartoon someday dance across the screen to explain cannabinoids at the retirement home? Will an adventuresome cannabis leaf be the star of a new video game? While marijuana sifts into the fabric of daily life, the leaf may be taking on a life of its own.