Hollywood’s visions of the afterlife 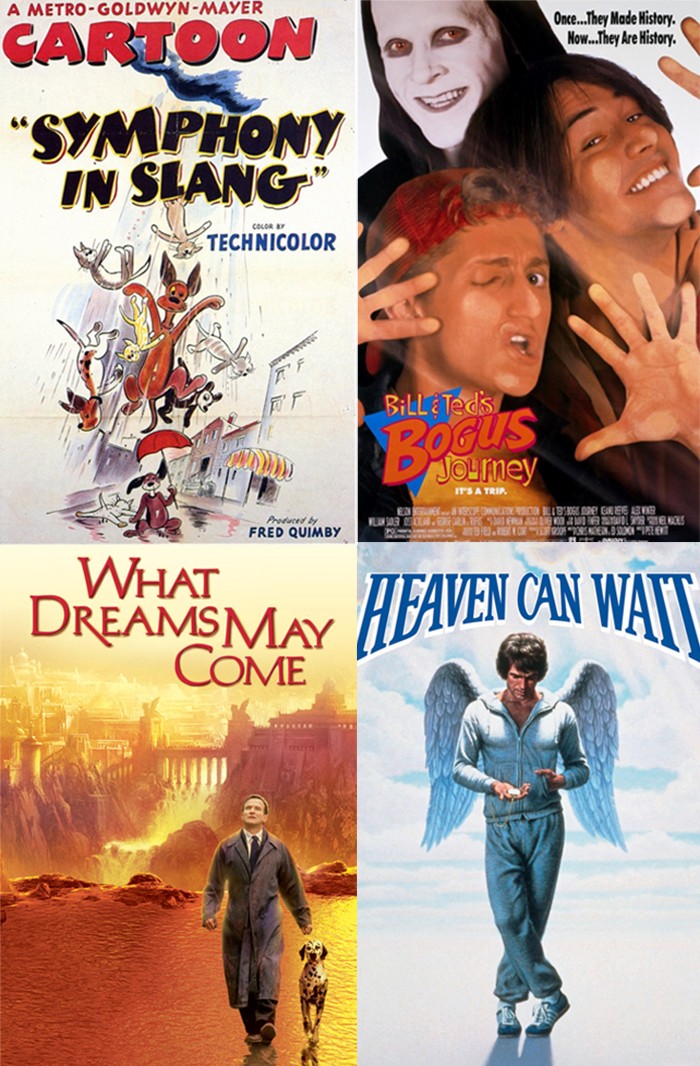 Symphony in Slang (1951)
This sharp, six-and-a-half-minute cartoon from MGM has your classic heaven, with pearly gates and St. Peter checking off names in a golden book and handing out halos to entrants. And as fans of animation director Tex Avery know, that’s where any trace of normalcy ends in this rip-roaring cartoon.

Heaven Can Wait (1978)
You’ve either never seen this movie or you’ve seen it a million times. The depiction of heaven is decidedly low-key on all things holy. The afterlife doesn’t resemble the pearly gates so much as an airport waiting area, and instead of hosting hippified angels wearing tunics and sandals, it’s a partly cloudy sound stage filled with well-dressed functionaries, who deliver souls to heaven like Federal Express packages.

Bill & Ted’s Bogus Journey (1991)
If Bill & Ted’s heaven is even close to the truth, we’ll be greeted by airline hostess-looking women and the most godawful (no offense, big fella) elevator-classical music. If our names are not on the “list” when we reach the gates, a poetic rendition of Poison’s “Every Rose Has Its Thorn” will get us in. Of course, the whole place is white, and there are pillars everywhere. It looks like a rich celebrity’s L.A. shag-palace. God forbid.

What Dreams May Come (1998)
Robin Williams is pretty much crushed by a car and finds himself in a joyful heaven that looks a bit like the planet in Avatar, combined with the New Zealand Lord of the Rings set, with big blue trees, and lots of lush countryside, a sort of Shangri-La for the CGI set. Anything that Williams wants to come true indeed comes true, including long-lost childhood pets bounding back into his gleeful existence. He risks it by going to hell to search for his wife, who committed suicide after his death.