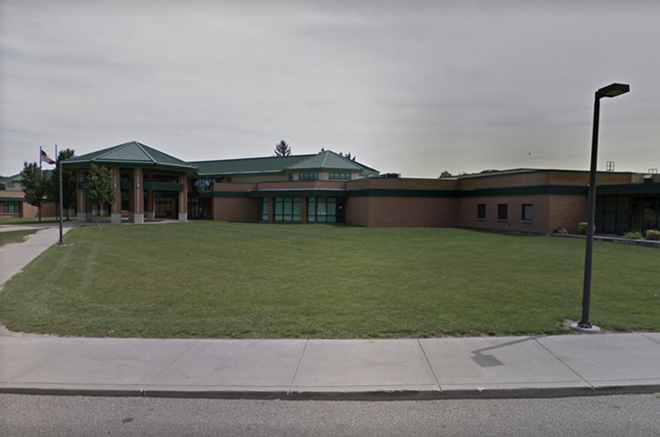 Candice Davis attended her first-ever school board meeting on Tuesday night after learning that her son’s class was presented with picking cotton as part of a social studies lesson on slavery. Her son is black.

Davis, a mother of an eighth grade student at Carman Ainsworth Middle School in Flint, has been tasked with explaining to her son why students should not have to reenact the oppression of their ancestors, and that there is much more to understanding the enslavement of African-Americans than picking cotton. She’s also had to try to explain why an educator asking children to pick cotton as part of an interactive assignment, as her son had to do earlier this month, could be construed as offensive.

While viewing a string of Snapchat snaps sent between her son and his friend, a fellow student at Carman middle school, Davis learned that her son took park in "Cotton Classroom" — a supplemental lesson plan pulled from a website that had last been updated in 2008 and cited zero sources.

"As soon as he said 'Cotton Classroom' my soul left my body, I knew this would not be good," Davis says. "I broke down in tears."

Upon learning about Davis' experience and outrage, the author of the website, a white male, removed the lesson plan immediately. Shortly after, he replaced it with an apology which directs teachers and parents to a resource dedicated to teaching tolerance.

"Cotton Classroom recognizes the unintended harm done from a previously posted lesson outline focused on Solomon Northup's narrative of picking cotton," the site reads. "Cotton Classroom sincerely apologizes and hopes that educators everywhere will engage families in open, transparent, and robust dialogue about how history is taught and how it affects people today."

Davis' initially said the school's administration had been unresponsive. After sending an email to the school's principal, Taylor Chapman, as well as the superintendent, Eddie Kindle, she was at first met with what she says was a dismissive phone call during which Superintendent Kindle instructed Davis to speak with the teacher directly and visit Cotton Classroom's website. She says he indicated that he would be playing the middleman in this dispute were he to get involved.

Davis' first made contact with her son's social studies teacher on Tuesday morning, almost a week after Davis' initial emails, which she says were not forwarded to the teacher. Tuesday's conversation with his teacher left Davis stunned.

The teacher explained that Cotton Classroom was part one of the lesson on slavery, and that she had brought in a box of cotton for all of the children in the class to voluntarily "touch, clean, or pick" to better understand Eli Whitney's cotton gin. Davis says the teacher said the cotton gin made it "easier for slaves" during their conversation.

"I couldn't believe it — she was having a hard time understanding that there was another narrative attached to this lesson," Davis says. "As soon as slave children were old enough to walk, they could pick. While your lineage and ancestors and children got to go to school, our children picked cotton, and those children are now the [ancestors] of the children you just asked to reach into a box of cotton."

This is but the latest instance of a school's failure to effectively and appropriately teach children about slavery by, as Davis says, using "slaves as tools instead of seeing them as people."

Last month, a teacher out of New York was accused of holding a mock slave auction for her fifth grade class. Around the same time, a fourth grade class in Wilmington, North Carolina, was instructed to participate in a role-playing board game entitled "Escaping Slavery." During the game, students were given slave names and a Freedom Punch Card that read: “If your group runs into trouble four times, you will be severely punished and sent back to the plantation to work as a slave.”

On Monday, artist and activist Tunde Olaniran took to social media to call on the community to contact the school board and demand a written apology to Davis for the dismissive phone call response by superintendent Kindle, as well as a guarantee that Cotton Classroom will no longer be allowed in Carman Ainsworth schools. Additionally, the post asked folks to demand that all lesson plans used in the district will include the publicly available author information and cited sources, as well as a commitment to transparency and cultural diversity when approaching the subject of slavery.

Please send an email to the Board and Superintendent of Carman Ainsworth Schools. We have a list of demands and need to hold them accountable for transparent follow up. https://t.co/rwVTJjaSPW pic.twitter.com/d1D81KWsJa


Davis’ complaint was that the school system was making it so that parents were far removed from the process of making sure lesson plans are appropriate, and if there were ever a time to keep an eye on your child, it's now. She added that this was never supposed to be her son's experience.

"If you’re not going to give me reparations in the form of money or land, can you at least give my child a proper education?" she says.

According to Davis, when her son’s class began learning about the Holocaust, the teacher invited a survivor to speak with the students about the atrocities and provide a firsthand account of their experience. She says she did not appreciate that black leaders in the community were not given the same opportunity to speak on slavery.

“Do you understand if you were able to dig into the community, we have elders who could speak on this very topic to correlate with your lesson plan?” Davis says. “They would trip over themselves for the opportunity.”

According to superintendent Kindle, a consensus was reached after a roundtable discussion with Davis and Carman Ainsworth staff on Tuesday evening.

“Well, first of all, let me say this, in no way shape or form, were students asked to pick cotton in the negative sense,” Kindle says. “In a parental sense, it was insensitive. The consensus we reached was that this was not about the lesson, it's about the activity. We developed some consensus on the fact that in our problem-solving session, [the activity] was not intended to hurt or harm anyone. But it does give us the opportunity to evaluate certain activities.”

Kindle says that the lesson, which was intended to show children what raw cotton looked and felt like, has been discussed with the teacher who was not present during Tuesday night’s meeting, and it has been flagged as a lesson that should not be taught in the future.

In addition to agreeing on future transparency between staff and parents when it comes to culturally sensitive social and historical subjects, Kindle says Carman Ainsworth will continue to expand upon its cultural competency training beyond its current program SEED (seeing educational equity and diversity).

“We will always have conversations about cultural differences, race, and how it impacts our community — we will never be finished with that, it’s never a box that gets checked off,” Kindle says. “It’s a constant gradual representation of the code of ethics every teacher in Michigan has to live up to.”