Beneath the surface of ordinary suburbia 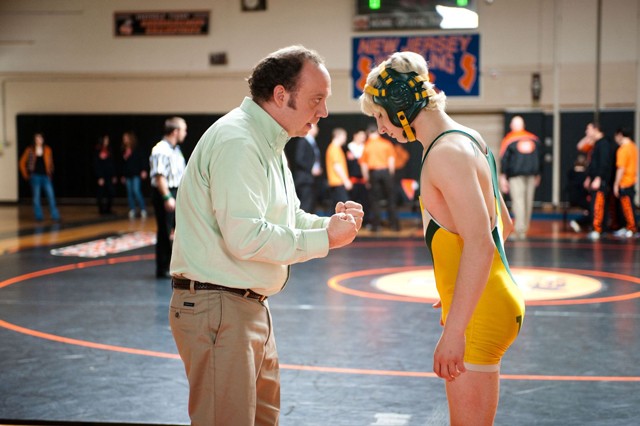 Family of misfits: Giamatti (left) and Shaffer in Win Win.

Hollywood rarely gets the little guy any more. Once upon a time, when the studios hired playwrights who sought to capture (and often romanticize) the working class to pen scripts, the film industry at least acknowledged the woes of everyday Joes. Today, however, life on the big screen is shiny, happy and privileged. The real-life implications of our country's punishing economic hardships might as well be an obscure facet of Lithuanian society for the all the play they gets at the multiplex. When producers do tackle our downsized working class, the best they come up with is The Company Men, a tone-deaf ode to the plight of disenfranchised corporate executives.

And I understand. Movies, for most people, are meant to be an escape from the grim realities of our jobless lives. Still, they could at least throw us working stiffs a bone from time to time.

This is why Tom McCarthy (The Station Agent, The Visitor) deserves praise for credibly sketching out what it's like to live in recession-era America. Unsurprising but frequently refreshing, his latest film, Win Win, adds a somber undercurrent of stress and insecurity to its self-effacing comedy.

Paul Giamatti is Mike, a struggling small-town attorney on the verge of losing his practice. He's also the coach for the worst high school wrestling team in the county. Buried under an avalanche of debt and too cowardly to admit his troubles to his tartly practical wife (Amy Ryan), Mike decides to make some extra cash by taking advantage of Leo, an elderly client (Burt Young) in the early stages of dementia. The plan works out great until Leo's troubled grandson, Kyle (newcomer Alex Shaffer), unexpectedly shows up — having fled his drug-addicted mom. Concerned for the boy and worried that his gravy train might come to an end, Mike takes Kyle in — only to discover that the sullen teen is a former state wrestling champ. Talk about luck, huh? Things get even better before Mike's deceptions come back to haunt him and ... well, you can probably sketch out the plot complications.

Though Win Win is certainly McCarthy's most commercial effort to date, it still benefits from the actor-turned-filmmaker's affection for the unconventional. Like his previous work, the movie explores how a quirky outsider struggles to find his way into a family of misfits. I love how McCarthy invests personality and nuance into even his most minor characters, casting each with care and attention. Though his script follows a fairly predictable plot path, it proves sharpest when it focuses on the family's everyday interactions. In unkempt kitchens, cluttered living rooms and local hangouts, McCarthy captures the ordinary surfaces of suburban life while buffing it up with clever dialogue and compassionate details.

It helps that he's attracted a first-rate cast. Giamatti, who excels at depicting engaging yet unremarkable men who war against their own best interests, is sure-footed enough to let his quirkier co-stars shine around him. Jeffrey Tambor is amusing as his sullen assistant coach, while McCarthy fave Bobby Cannavale plays his newly divorced and hilariously bitter best friend Terry. Equally good is Ryan, who defies Hollywood spousal stereotypes to create Mike's fiercely judgmental yet soft-hearted wife. Ultimately, however, it's Shaffer who impresses most. A first-time actor and topnotch wrestler, he brings poignancy and authenticity to his wary and wounded teen, garnering both our understanding and affection.

Funny, humane and easygoing, Win Win effortlessly earns the audience's good will only to squander it in an ending that plays things way too safe. While there's little doubt McCarthy has a deep fondness for his eccentrically spirited characters, he sands down his indie edges to produce a film that, in the end, takes few risks and offends no one. After presenting some interesting ethical (and legal) dilemmas, his story painlessly tidies things up, discarding messy emotional dynamics and unexpected humor for formulaic quarrels and revelations. And with those misguided final act choices, McCarthy turns the ironic commentary of his title into an excuse for a too calculated feel-good conclusion.