Author details everything hospitals don't want you to know 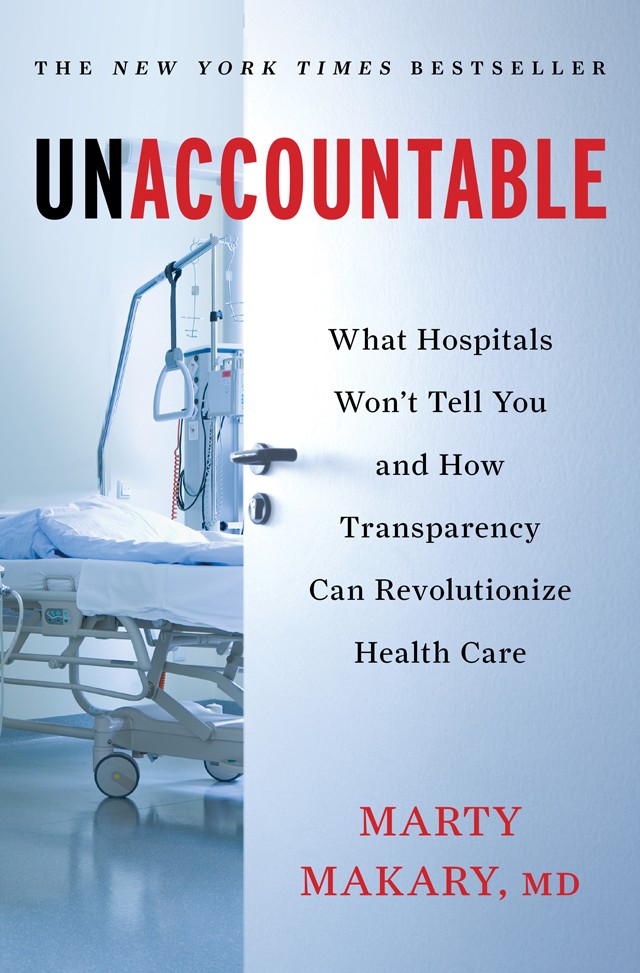 Unaccountable: What Hospitals Won't Tell You and How Transparency Can Revolutionize Health Care

One night, when Dr. Marty Makary was an intern covering the overnight shift at D.C. General Hospital, 12 trauma cases arrived in quick succession. Makary called his senior surgeon for help. The boss berated him and hung up the phone. He never came in and two patients died that night.

In Unaccountable: What Hospitals Won't Tell You and How Transparency Can Revolutionize Health Care, Makary does not say if it's likely those two would have died anyway, but he lets the reader assume that they probably would not have. It's the ethical problem at the core of our medical system, sometimes called a hazing but really more like a mafia initiation.

"The errors interns make generally don't come to light," Makary writes. "Every now and then, however, the patient is a journalist."

Makary has himself taken the journalistic route in his book, layering detail and horrific anecdote atop research that shows, definitively, that hospitals are absurdly dangerous places. The book is half exposé and half consumer guide for those who would try to avoid those horrors.

The statistics are hair-raising. As much as 25 percent of all medical patients are harmed by medical errors. Hospitals reap billions of dollars doing and redoing botched or unnecessary procedures. Most patients never know they were maltreated, and hospital culture enforces a code of silence on doctors and nurses regarding incompetent practitioners in their midst.

At the bottom of all this is a kind of omerta, Makary writes. It's just not prudent for young (or even middle-aged) doctors to call out their dangerous colleagues in public. Makary is, himself, loath to name the culprits in some of his most terrifying anecdotes, preferring such sobriquets as "Shrek."

In one chapter he discusses the late Dr. Michael DeBakey. The Shah Mohammad Reza Pahlavi of Iran requested the famous cardiac surgeon and inventor do his splenectomy, not realizing that DeBakey, famous though he was, did not excel at the abdominal surgery the shah required. DeBakey botched the operation and the shah died because of it, Makary writes.

In a bid to get real reform, Makary emphasizes changes that ought to be easy to make — and which have proven effective. He writes about the culture of hospitals; some are open and collaborative, and in those places nurses feel empowered to speak up when a doctor is about to cut the wrong patient or the wrong side of a patient's body — so-called "never events" that Makary says happen several times a year, even at good places like Johns Hopkins, where he works as a surgeon specializing in ailments of the pancreas.

Looking at the answers to a few simple questions asked of hospital staff (Would you have an operation done here? How would you rate the spirit of teamwork?) and things like the "bounceback" rate (that's the 90-day rehospitalization rate) for various procedures would go a long way toward allowing health care consumers to choose their medical providers based on real data.

Sophisticated outcome measures have been developed but are secret, and hospital administrators mean to keep them so. The agencies most people think of as watchdogs are ineffective, Makary writes:

"So who is in charge of policing medical care in America? Not the FDA — they approve medications and devices as safe. Not Medicare — they just pay the bill for seniors and police billing fraud. Not hospitals — they profit from incompetent medical services that only breed more hospital services. Not the American Board of Medical Specialists — they simply give out certifications for passing certificate exams. And doctors' associations view their function as just running forums for medical education, and lobbying for higher Medicare payments for doctors."

There are moments of apparent naïveté, as when Makary states that citizens have asked for "transparency from Wall Street and Washington," implying that they've gotten something like it. (He later circles back to it, saying CEOs can "go to jail" because of Sarbanes-Oxley.) He also apparently didn't get the memo from the drug-treatment industry that addiction is a disease, hardly different than diabetes, and is upset that drug-addicted, alcoholic doctors are almost never punished.

"Doctors should be held to the same standard that pilots are held to by the FAA," Makary says in a telephone interview. "Immediate suspension if you have a serious problem resulting in a threat to the public. You should not be able to jump states."

Addicted doctors usually do just that, restarting their careers in the prison system, at nursing homes, and in drug-treatment centers if their state medical board publicly sanctions them.

If he kept his head down and his mouth shut, Dr. Makary would have a lucrative life operating on people suffering from pancreatic cancer. He'd keep the respect of his peers and colleagues, win the undying loyalty of his surviving patients and their families, and stay on the good side of hospital management as he reaped big fees for his highly skilled service.

But Makary's conscience won't allow that. So he's joined what he calls a movement for hospital transparency and accountability, and has begun making the rounds on the morning chat shows with his book. He says the two deaths that occurred on that long-ago night when he had to handle 12 wounded people with just one assistant were "potentially" avoidable.

"These are the things you struggle with as a resident in training," Makary says. "Things have changed a lot since then ... [and] I think it's important for people to know that I'm not a leader or crusader in this cause. I'm just describing a movement to make medicine more honest."

The movement really kicked off more than a decade ago with the famous Institute of Medicine study on medical errors. Dr. Peter Pronovost's Safe Patients, Smart Hospitals pioneered the pilot-style checklist for surgeons and their teams; it was preceded by Dr. Atul Gawande's The Checklist Manifesto in 2009.

"I try hard to tell in the book the success stories of the heroes," Makary (who helped Gawande in his research) says. "They are the doctors and nurses on the front line of health care. When hospitals have developed an ability to bridge the divide between front line health care workers and management, they can deliver exceptional results."