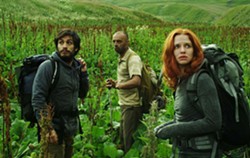 Meaningful communication, or the lack of it, is what keeps the attractive couple (played by Hani Furstenberg and Gael García Bernal) in The Loneliest Planet from connecting with one another and, frankly, what prevents Julia Loktev's movie from connecting with its audience.

Anyone who saw Loktev's minimalist terrorist drama Day Night Day Night probably has a pretty good idea of the filmmaker's slow-moving, existential approach cinema. In The Loneliest Planet, her hypnotic pace and style hasn't picked up any, but the scenery has certainly improved.

Nica and Alex (Bernal and Furstenberg) are a soon-to-be-married couple hiking the Caucasus Mountains with a dour Georgian guide (Bidzina Gujabidze). Their travels seemingly unfold in real time, with the camera standing in as a fourth companion, allowing us trudge alongside them as they cross streams, leap across boulders, and playfully tease one another. For the first half of this nearly two-hour film we're invited to experience every intimate moment, view their behavior under a emotional microscope, search for hidden fractures. The landscape, in contrast, is lush, majestic and ominous; inevitably, it feels as if Loktev is leading us toward something awful. When that something does happen — or almost happens — the lovers are forced to reconsider their understandings about each other, and the dynamic between all three shifts considerably. And then they must walk back. And we must walk back with them, every disappointed, alienated step of the way.

It's obvious that Loktev intends to parallel the inner and outer landscapes of this couple as they make their way through a lush, majestic and ultimately haunting setting. And the images are truly sumptuous. But the distance with which she holds us from her characters, their inability to talk to one another about something that, well, probably would have inspired at least some discussion, leaves us with only ever-shifting triangular compositions to contemplate. At times, the figures become swallowed by the landscape, which is a wonderful metaphor but wholly unsatisfying as drama. I appreciate Lektov's dedication to verisimilitude and her disdain for overexplanation, but too often her movie feels like its needlessly spinning its wheels. With no more than a couple of paragraphs of dialogue, she expects you to form your own ideas about why the characters behave as they do both before and after the event. But eventually their inability to communicate begins to feel less like a natural by-product of their personalities and more like an act of directorial indulgence.

Still, that doesn't prevent Loktev from putting forward a rather rough-hewn gender critique of male aggression. What happens when an act of cowardice or selfishness unbalances a woman's trust? How does she continue that relationship? How does it change her relationship with others? These are human questions worthy of examination, but The Loneliest Planet doesn't really examine them as much as it turns them into a lyrically abstract scheme, one that, in the right frame of mind, can be quite effective, but, in the end, is still only a scheme.

It should be noted that even though Loktev has rendered her characters mostly mute, the three actors do a terrific job of communicating their thoughts and emotions through facial expressions and body language. They almost transcend the tedium to keep us interested.

In some way The Loneliest Planet reminds me of Gus Van Sant's sober minimalist phase. If Gerry was your idea of cinematic profundity, Loktev's film is right up your alley. Personally, while I can appreciate the skill with which she balances overwrought emotions against a willfully underdeveloped narrative, it's simply not my cup of tea. In other words, I get it... I'm just not sure it's worth getting.