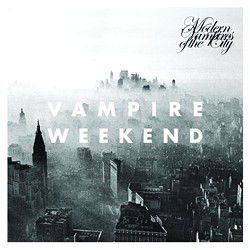 Now, this writer “hated” this band’s previous album; their third release seems to recover nicely, surmounting the “sophomore slump,” (as it’s known in the music world when breakout bands go bust on album No. 2.)

Vampire Weekend flared with the white light of a buzz band comet with its 2008 debut: Decorous, dashing, somewhat droll and all straight-collared stylish; complete with its quirky, effervescent blends of literate adult-contemporary pop and freewheeling Upper West Side art-rock.

It’ll seem like the same old redemption story when a band recovers from previous underwhelming outings (namely 2010’s Contra), and it’ll seem like this writer’s just another in a line of hipster lapdogs — but that’ll be your loss if you cast them off too quickly.

It could be that this band has grown up, or just gotten more confident. The lyrics are existential and cryptic, but not half-baked or convoluted; the band’s sense for rhythmic hooks is, again, both weird and well worn. The breakdowns just nearly (and playfully) throw you off-step in your dance moves, and they spin you into fresher, busily instrumented passages (indie “rock,” heavy on organs, pianos and synthesizers, with classical strings and lots of muddy/hazy vocal effects).

As zany as certain drum parts and riffy guitars can be, each song resonates with a confidence not found on Contra. The band members now seem confident to use their voices as much (and in as many ways) as possible to bolster instrumentation, harmony and melody.

Maybe it’s the same old story of “third time’s the charm.” Maybe it’s the songs, stuffed with major keys and jittery tempos, warm in tone and replete with SFX-laden harmonies, thrumming like chicadas, just beg you into that good-time vibe.

It’s still complex-art-pop made by what definitely sounds like four nerdy white dudes. But this could be what that sounds like when it’s at its most universally appealing. I’m sure their next album will be rubbish.