Film Review: On the Road 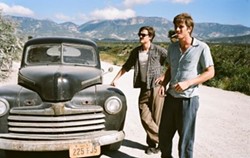 Jack Kerouac’s rambling, poetic, salacious and spiritual semi-autobiographic opus has always been on the short list of great American novels that have been generally considered to be “unfilmable.” It took a half-century, but someone has finally attempted to capture all the passion, soul and madness that has made On the Road essential reading for generations of budding young rebels. And it is a noble try; one that is sprinkled with gorgeous imagery, engaging performances and a decent helping of the sort of soul-deadening boredom that can only be understood while driving through the flat, expansive nothingness of Nebraska.

It would take a scholar to unwind the jumbled strands of the presumed “plot,” which is essentially just a series of aimless wanderings and misadventures across the breadth and depth of America, all bound together by the gradual erosion of one intense friendship.

Sal Paradise (Sam Riley), a stand-in for Kerouac, is a talented, restless young writer, inexorably drawn to the reckless, unaccountable and deeply charismatic hustler Dean Moriarty (Garrett Hedlund) who is modeled after the self destructive poet Neal Cassady. Together, and sometimes separately, they set out to explore both the inner and outer worlds; both eager to push the edges of all the social, racial and sexual boundaries of the time. Dean want to learn to be a better writer, and Sal wants to learn how to live totally free and unencumbered like his roguish pal. The duo wanders the nation, looking for love, sex and cheap thrills of a jittery post-war world. These guys are hungry for words, drinks and most of all experience on the other side of the fence, as they groove to the jazzy Ella Fitzgerald and dig the absurdist “vout” rhyming of frenetic blues man Slim Gillard. Ultimately Sal and Dean’s relationship is toxic, but it takes mountains of pills, oceans of booze and untold thousands of highway miles traveled to discover the rot at the center of their partnership.

Along the way they encounter a variety of friends, rivals and lovers, most of them thinly disguised analogues of Kerouac’s real life Beat Generation contemporaries, like Joan Vollmer (Amy Adams), Helen Hinkle (Elizabeth Moss) and, of course, the junkie icon, William S. Burroughs (Viggo Moretnsen). The Allen Ginsberg clone Carlo Marx (Tom Sturridge) has a brief, doomed romantic fling with Moriarty, and prophetically claims that he probably only has one great poem inside himself. While Sal keeps seeking his place in the cosmos and history, back down on Earth, Dean can’t decide on a muse, repeatedly bouncing between towns and his two wives Camille (Kirsten Dunst) and Marylou (Kristen Stewart). As the insatiable, thrill-addicted Marylou, Stewart finally finds an outlet for her brand of distracted, curious sensuality. For the sleepy eyed actress often accused of daydreaming her way through Hollywood, she is fiercely alive as the sexy, conflicted and manipulative teen bride.

Whatever fire the leads stoke is needed to light the way through the story’s many cold, wistful dead ends, which are the inevitable byproducts of adapting such inward-looking fiction. Brazilian director Walter Salles excels at romanticizing the lure of travel, and he captures the faded, slightly rusted, lost mid-century world with much of the same vividness he displayed in 2004’s The Motorcycle Diaries. He is less successful in wrangling a coherent narrative out of all this soulful searching, but that is likely as much a lost cause as the tragically hedonistic “Holy Goof” that is Dean. The movie, like its untamable, energetic anti-hero, would rather just burn out than ever settle down.