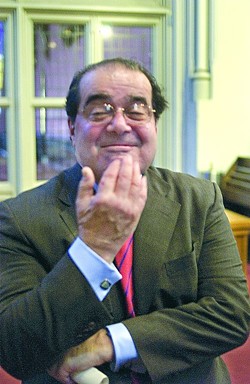 On the eve of his 27th anniversary as a jurist, conservative Supreme Court Justice Antonin Scalia had quite a lot to say on a range of topics from homosexuality to politics in a colorful interview withNew York magazine.  Here are six of his most absurd quotes:

When asked about his views on homosexuality and judicial opinion on the topic, he said, “I have friends that I know, or very much suspect, are homosexual. Everybody does,” but added that none of his friends had ever come out to him personally.

Interviewer Jennifer Senior then asked Scalia whether his views on homosexuality had softened, to which he replied: “I still think it’s Catholic teaching that it’s wrong. Okay?”

Following his discussion on homosexuality, Scalia leaned in to Senior and whispered, “I even believe in the Devil … he’s a real person. Hey, c’mon, that’s standard Catholic doctrine! Every Catholic believes that. … In the Gospels, the Devil is doing all sorts of things. He’s making pigs run off cliffs, he’s possessing people and whatnot. And that doesn’t happen very much anymore …What he’s doing now is getting people not to believe in him or in God. He’s much more successful that way…”

In response, Senior expressed her utter disbelief at his literal acceptance of the Bible, to which Scalia scornfully replied: “... My God! Are you so out of touch with most of America, most of which believes in the Devil? I mean, Jesus Christ believed in the Devil! It’s in the Gospels! You travel in circles that are so, so removed from mainstream America that you are appalled that anybody would believe in the Devil!”

3. On His Media Diet

When quizzed on where he obtained his morning daily news, Scalia said he skimmed the Wall Street Journal and Washington Times, but that he chose to boycott the Washington Post:

“We used to get the Washington Post, but it just … went too far for me. I couldn’t handle it anymore. It was the treatment of almost any conservative issue. It was slanted and often nasty. And, you know, why should I get upset every morning?”

The jurist had quite a mouthful about manners in society and the Internet “coarsening” our culture, but not before indirectly insulting women with his sexist undertone about language:

“I am glad that I am not raising kids today. … One of the things that upsets me about modern society is the coarseness of manners. You can’t go to a movie — or watch a television show for that matter — without hearing the constant use of the F-word — including, you know, ladies using it. People that I know don’t talk like that!”

Scalia made no apologies for his bold expressions, saying that it “never cost me a majority,” adding that no justice of the Supreme Court would ever make a case come out the other way just to spite him:

“Nobody would do that… My tone is sometimes sharp, but I think sharpness is sometimes needed to demonstrate how much of a departure I believe the thing is.”

Asked about his odd-couple friendship with Ruth Bader Ginsburg, the provocative Scalia took a cheap shot:

“If you have low expectations, you’re not disappointed. When it’s somebody who you think is basically on your side ... and then that person goes over to the dark side, it does make you feel bad.”