The racial focus here is ‘so prominent, it’s scary.' 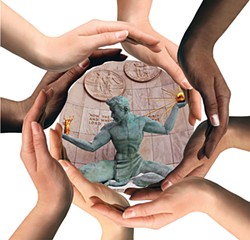 I was strolling through the lobby of the Fisher Building when I turned into the hallway headed to the elevators. I heard a “Pssst” come out from a shadow.

“Mulenga, I thought you stopped all that slinking around in the shadows.”

“I’m practicing. I may need to go back underground. White folks are taking over the city.” He stepped out of the shadow. His head swiveled around, checking out our surroundings.

“Are you losing it because Mike Duggan was elected mayor? You know a lot of brothers voted for him.”

“It’s not just that. They’re everywhere, riding their bikes and their skateboards, walking around in the neighborhoods with their baby carriages all proud like they own the place.”

“That’s what I mean. They buying up everything like the city’s on sale.” Mulenga spotted a couple of police officers down the hall and kind of melted back into a doorway. I stepped in with him. I didn’t want to look like I was talking to myself. (I didn’t have any communication device hanging from my ear.)

Mulenga kept talking. “And here’s the real deal. All these young white kids are moving in and starting businesses. They going to grab up all the money and we know that’s where the real power is.”

“I don’t think that’s real. Black people are starting businesses too. My neighbor, Gerald Watson, he’s opening a restaurant over on Adams and Park. He’s calling it Mo’ Betta Blues, after the Spike Lee movie. He said it’s going to be a jazz and blues joint featuring classic American cuisine with a modern twist.”

“Blues?” For a moment Mulenga fingered the harmonica he always carried in his pocket. Then he snapped out of his momentary blues haze. “Well, just because one brother is starting a business doesn’t mean anything. You can always find an exception to the rule.”

“He’s no exception. I’ve been looking into this. The Detroit Black Chamber of Commerce says there are more than 30,000 businesses owned by African-Americans in Detroit. That’s pretty much three out of every five businesses.”

“Yeah, but the trend is going the other way. And it seems like every time I see one of those ads promoting Detroit, all I see is white people.”

“Those ads do tend to put them front and center. But I’ve been looking into this. There’s this place called TechTown. It’s a business incubator near Wayne State University. I talked to a couple of people over there. Charlie Moret, the managing director of technology-based entrepreneurship, told me that of the 12 start-up businesses in his program, seven of those ventures are by African-Americans. Regina Ann Cambell, the SWOT City case manager for retail businesses, said that the nine businesses she works with are a diverse group, racially and age-wise.”

“That stands for strengths, weaknesses, opportunities and threats, apparently those are some of the things you need to consider when starting or growing a business.”

“I don’t get it. Why are all these groups here trying to tell people how to start a business? They got the D:hive, the Green Garage, TechTown.”

“The problem is that some people don’t have very lively imaginations.”

“And some people have overactive imaginations, like when you think people are chasing you around,” I said.

“Just because I’m paranoid doesn’t mean nobody’s out to get me.” His head swiveled around again, checking out the surroundings.

I patted Mulenga on the shoulder. “I got your back, bro.”

He relaxed back into the shadow. “I need to see black people moving up around here. It seems like we’re moving down.”

“Well, how about this: coG Studio is a new architectural firm opened up a few years ago by Chandra Moore, who specializes in youth-friendly designs. You can see what she’s doing; coG has done work at Glazer Elementary School on the west side. Moore helped Speilhaus Toys with its pop-up space downtown. She’s working with the Lafayette Towers renovation. It’s going to be hard to miss Moore’s influence around here.”

“Now that’s what I like to see, black people making a difference.”

“Moore is making a difference, but she’s not that concerned about the black aspect. She told me, ‘It’s not a thing of color. Once Detroit gets past that, it will grow.’ She’s from California and says the racial focus here is ‘so prominent, it’s scary.’”

“It is scary, that’s why I have to live in the shadows,” Mulenga said.

“Well, you need to dial it down. That stuff starts to control your mind after a while. It’s counterproductive. Folks need to go about taking care of their business and not worry about what other folks are doing. Just get out there and do what you love doing. When it comes to running his place, Watson said it was his passion. ”

Mulenga stepped out into the light. He stood up a little taller. “Maybe I should follow my passion and start a blues band. I got this song I’m writing. ‘I cry tears of joy for the people of Detroit when I see them taking charge of their lives.’ What do you think of that?”

“Well, it’s better than sitting and crying about your troubles. And I like that it’s about something positive. Tears of joy — that’s a nice twist.”

“And it’s about business.”

“It’s show business. There’s no business like that. Maybe you’ll be able to catch us playing at Mo’ Betta Blues before we go national.”

“Now that’s the right attitude. You know, I got this idea for a song …”