This latest take on the mutton-chopped superhero is a renaissance for its actor and the franchise. 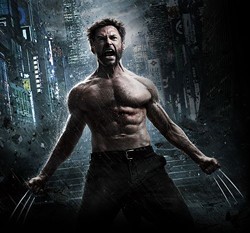 Wolverine (Hugh Jackman) is running to the bank with the release of this latest flick about the superhero with crazy-long fingernails.

You know a movie is bad when the title of its sequel subtly implies that it wants you to forget about its predecessor. The Wolverine (emphasis on “The”) seems to be asserting itself as the definitive solo outing for Hugh Jackman’s mutant hero. And who can blame the filmmakers from wanting to distance themselves from the cliché-ridden X-Men Origins: Wolverine, a movie that even comic book nerds found hard to love.

This time out, James Mangold (Copland, Walk the Line, 3:10 to Yuma) is at the helm. And with screenwriters Scott Frank (Minority Report, Get Shorty, Out of Sight) and Mark Bomback (Unstoppable) doing story duty, it’s clear there was a conscientious choice to make a film that favored character over pixel-driven effects.

Which isn’t to say that The Wolverine doesn’t have a few great physics-defying action sequences. In particular, the fight atop a speeding bullet train is handled with jaw-dropping verve. Jackman and a trio of assassins face off as power cables and steel struts slice past overhead. It’s a tense and physical set piece that’s so well composed, it seems like it sprang directly from the comic book pages.

In fact, much of The Wolverine’s action has a grounded reality to it that’s a welcome change from the weightless CGI dominating most superhero flicks. Only the final metal-on-metal showdown between Logan and gigantic silver samurai pushes things back into generic super-villain mode. The last 20 minutes could have easily fit into any of the Iron Man movies.

The overall story is set a few years after the end of the third X-Men movie. Logan (Jackman), is in self-exile, playing mountain man in the Canadian wilderness, haunted by dreams of Jean Grey (Famke Janssen), whose life he was forced to take.

Summoned to Japan to pay his respects to dying business tycoon Shingen Yashida (Hal Yamanouchi), a man he saved during World War II, Logan is offered the chance to live a “normal” life, to be “cured” of his mutant healing and immortality.

It’s a tempting offer since it would mean no more watching his friends and lovers die as he remains young. Quickly, however, Wolverine finds himself caught in a web of corporate corruption, family intrigue and mob rivalries.

As his powers mysteriously wane, he struggles to protect Yashida’s beautiful granddaughter, Mariko (super model Tao Okamoto), from assassins while gaining a sword-wielding sidekick named Yukio (Rila Fukushima), who has the ability to glimpse the future.

The plot line comes courtesy of an acclaimed 1980s comic series by Chris Claremont; it pits Wolverine against both ninjas and the Yakuza while slowly developing his romance with Mariko. It’s a rich and tightly paced, character-driven thriller that finally gives Jackman some meaty anti-hero angst to chew on. Believe it or not, this is the actor’s sixth time playing the mutton-chopped mutant, and it’s easy to see why the script would appeal to him.

Unfortunately, the story also suffers from an overload of villains and competing schemes, none of which are particularly interesting. There’s a corrupt defense minister, a ruthless father, an arrow-slinging former lover, and Viper — a sexy, campy mutant scientist who has a snake-like tongue and spits acids and toxins.

As each new opponent’s agenda comes into focus, The Wolverine loses more and more of its lean, mean intensity. Eventually, the movie gives in and embraces its comic book roots, undermining what made Mangold’s straight-faced efforts stand out in the first place.

Still, The Wolverine looks and feels different from your average superhero flick for most of its running time. While it may not be as go-for-broke entertaining as The Avengers, or as allegorically ambitious as The Dark Knight movies, it brings with it enough thrills and character to warrant more movies. That’s a hell of a lot more than can be said for its predecessor.

The Wolverine opens in theaters on Fri., July 26 and is rated PG-13 with a running time of 126 minutes. Check your local listings for locations and times. Watch the trailer here.