The War on Drugs, Bait and Switch, Politics and Reality 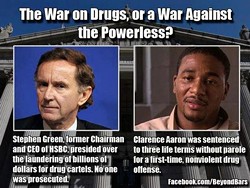 The drug war has been waged in a racist manner since its inception. The Harrison Narcotics Act of 1914 was preceded by a wave of anti-immigrant sentiment. Opium was identified with Chinese laborers, marijuana with Mexicans and cocaine with African-Americans.

Racial profiling continues to be the norm, despite similar rates of drug use for minorities and whites. Support for the drug war would end overnight if whites were incarcerated for drugs at the same rate as minorities. The drug war is a cultural inquisition, not an evidence-based public health campaign.

Prison cells are inappropriate as health interventions and ineffective as deterrents. It’s time to declare peace in the failed drug war and begin treating all substance abuse, legal or otherwise, as the public health problem it is.

Thanks to public education,

addictive tobacco use has declined, without any need to arrest smokers or imprison farmers. Drug abuse is bad, but the drug war is worse.

While I am in complete agreement that this Mike Dugeon is a total fraud, and that someone set him up to this, I’ve been surprised by the media freak-out over this. It feeds his fake candidacy.

Maybe I’m too much of an optimist, but as far as I’m concerned, it is not at all impossible that Duggan actually comes out on top, yes, even as a write-in next week.

My gut tells me that if he doesn’t come in above Napoleon, he’ll come in second with thousands of votes to spare. Most pundits are saying that, at worse, Dugeon siphons off a few hundred votes, tops.

I know folks think Detroiters are stupid (I don’t), but they are being asked to spell “Duggan” not “Murkowski”; the papers are saying that “Dugan” will likely go to Duggan, which I imagine might be the most common mistake made.

This guy is the guy to beat; and he was the minute he walked in the race. People seem to be grossly underestimating the support he has on the ground.

re: “Right, Left And In Between: What caused the financial downfall of Detroit?”; [Special Report: Detroit in Bankruptcy, July 31-Aug. 6, 2013.]

I agree with what was presented in the article as the reasons for what seems to be the demise, my word, of Detroit.

But, aside from the impending cloud of doom Detroit faces, and just as General Motors and Chrysler exited bankruptcy successfully, Detroit will do the same! Detroit has better days and a brighter future ahead. When it’s all over, bankruptcy said and done Detroit’s going to be all right. As the adage says, “There’s light at the end, it’s not a freight train.”

We reserve the right to edit for length, clarity and libel.