Occupy me. Sci-fi ‘possessed by aliens’ premise suffers from a botched script 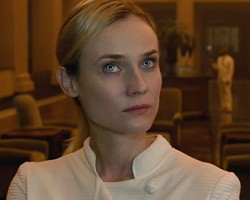 Diane Kruger plays an icy villain in The Host.

Having thoroughly exploited all the pathos possible in human-werewolf-vampire love triangle scenarios, Twilight author and empire builder Stephanie Meyer set her sights on another shopworn genre in which to inject her brand of swooning teenage angst: the alien invasion. Meyers’ latest potential franchise, The Host presents an Earth already conquered by a race of immortal, parasitic creatures that roam the universe looking for worlds to invade and to promptly begin redesigning them to look like an Apple Store. These metrosexual monsters have a fetish for white leather, chrome and glass, and a belief that their galactic gentrification strategy is in the best interest of the inferior races that they subjugate. These outsiders don’t seek to destroy, just assimilate, infiltrating the bodies and minds of humans and absorbing our experience, but suppressing our personalities in the process.

Referred to merely as “souls,” when removed form their host bodies, the aliens look sort of like crawfish with tendril-like fluttery, glowing spermatozoa.

There are of course still scattered pockets of resistance, one of which includes headstrong teen Melanie Stryder (Saorise Ronan), who refuses to give up on her brother, her boyfriend and her desert camp of survivors, even after she has been bonded to a soul, that calls itself “Wanderer” or Wanda for short.

While she’s no longer in control of her body, Melanie’s personality so forceful that Wanda can still hear her whiny voice in her head, and we can hear her in voiceover, which is a convenient way for us to eavesdrop on all the mopey internal monologues that padded out the novel’s page count. After a bit of squabbling, these two trapped personas begin to grudgingly accept each other’s presence, though they happen to like different guys, and send mixed signals by repeatedly bouncing around and playing tonsil hockey with both of them. This leads to dialogue gems like: “Now, kiss me like you want to get slapped!” The himbo romantic foils (Max Irons and Jake Abel) are both a little drippy, but are notable acting upgrades from Twilight’sTaylor Lautner, though, in fairness, nearly anything with a pulse would be.

Having played a ghost (The Lovely Bones) and an assassin (Hanna) the skilled Ronan is comfortable with genre, and she excels at wistfulness, and her big expressive eyes still convey loss, longing and strength, even while encumbered by the white-out contact lenses that are the alien’s signature. William Hurt is around to lend credibility, though he looks mildly embarrassed most of the time. Diane Kruger nicely employs icy, blond Germanic efficiency as the lead baddie.

Director Andrew Niccol specializes in sterile techno futures (Gattica), and he crafts some arresting imagery, though the slow pacing and droning, new age score makes everything feel like an endless Ambien commercial. The script, by Meyers and Niccols, never bothers to explain the utter impracticality of an invasion force that lacks fingers of its own, but needs to perform surgery on billions of human beings in order to succeed. There’s more absurdity, and weird allusions to Scientology, Obamacare and polygamy, though all of this is secondary to the kind of chaste romance and identity quests that are likely to put the intended audience’s butts in the seats.