Not since the venerable Say Anything has a movie depicting teen angst done such a remarkable job capturing reality. 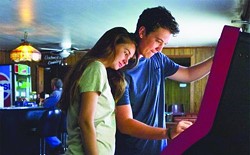 The Spectacular Now  | B+

When you inventory the movies that attempt to take teenagers’ emotions seriously, you realize how dreadfully short that list really is. It’s not that films like The Way Way Back or Easy A don’t try, but it says something about their approach when, 24 years after its release, Cameron Crowe’s Say Anything still remains the cinematic high mark for exploring adolescent angst without condescension.

The movie capped off the ’80s, when John Hughes was the standard-bearer of teen anxiety, relying on broad laughs (sometimes wince-inducing — Long Duk Dong, anyone?) and rom-com sensitivity to sell his obsessions with class and clique distinctions. In Hughes’ worldview, the triumphs and tribulations of youth were defined along a jock-nerd-princess-bad boy continuum.

Based on a novel by Tim Tharp, The Spectacular Now introduces us to Sutter Keely (Miles Teller), a popular high school senior and class clown. Smart, self-assured and underachieving, he believes he has everything he could ever need: A car, a job — and a fake ID.

He gets along with almost everyone, but doesn’t seem to have any plans for the future. Instead, he likes to drink. Constantly. Before long, we begin to realize that the flask he carries around isn’t a hip affection of adulthood, but rather a warning sign of the man he may become.

After a hard night of partying, Sutter wakes on the front lawn of Aimee Finicky (Shailene Woodley), a brainy wallflower who reads manga comics and drives her drunken mom’s morning paper route. Recognizing there’s more to Aimee than meets the eye, he starts working his charms on her. It doesn’t take long for the pretty, shy girl to become smitten, losing sight of her own best interests. And though Sutter still pines for his ex-girlfriend, he finds himself caring more and more for Aimee — eventually understanding that he’s standing in her way.

On its surface, The Spectacular Now has many of the hallmarks of your typical high school dramedy. Screenwriters Scott Neustadter and Michael H. Weber ((500) Days of Summer) understand the romantic psyche of teens, letting their behaviors and interactions — rather than snappy dialogue — express who they are.

There are some sappy, formulaic missteps along the way, particularly in the film’s final third, which sends Sutter in search of his deadbeat dad (the always good Kyle Chandler), but director James Pondsoldt (Smashed) and his cast dig beneath the story’s surface to reveal their characters’ fears and insecurities. There’s a naturalistic and infectiously earnest approach to Sutter and Aimee’s relationship that makes us root for these young people as they struggle to chart a future for themselves.

Neither Teller nor Woodley (who was so good as George Clooney’s daughter in The Descendants) is Hollywood glamorous, but both have talent and charisma to spare. Together, they find a convincing and exquisite intimacy that skips many of the standard-issue coming-of-age tropes and instead focuses on complex self-acceptance.

Sutter, despite his charms, is not only adrift, he’s self-destructive, and his ability to overcome those instincts is never a given. Aimee is intensely vulnerable, lacking the confidence to take control of her life. There’s something sad and genuine about this bright young woman hanging on Sutter’s every romantic gesture, and when she adopts some of his drinking habits, you’re reminded of just how damaging young love can be.

From their delicate first kiss to the first time they have sex, the actors navigate their characters’ emotions, rationalizations and disappointments with such unbearable authenticity that you can’t help but worry about them long after leaving the theater.

Though it sometimes struggles to keep its soapier instincts at bay, The Spectacular Now is such an honest and poignant portrait of teen romance that it makes for a memorable night of summer love … and heartbreak.

The Spectacular Now is in theaters Aug. 23, and is rated R with a running time of 95 minutes.